What I love about collecting is that you never know what you will be coming home with. After four decades of hunting and gathering I still see things out there that I didn’t even know I wanted, but after I see them I can’t live without. Such is the case with my most recent find – a Walt Disney Productions “No Trespass” sign.

A couple of weeks ago, we went to an antique show in Maryland that is a favorite of ours, and for me the coolest thing there was the metal Disney sign. It was for sale from one of my favorite dealers at the show. He told me that he purchased the sign at a California flea market in about 1970, when he was living there. I suspect that it probably didn’t cost him much at the time. I wouldn’t be surprised if the person he had purchased it from picked it out of the trash. That is how it made it to the East Coast. I did a little research and found that Walt Disney Productions moved to their Burbank studios in 1940, so the sign cannot be older than that – or newer than 1970, the date it was purchased by the dealer. The clue to the actual age of the sign is with the cute little character decals all over it. The decals could have been added later but I doubt it. I think it was Disney’s way of adding a little magic to everything they did, including this mundane sign. There are characters that you don’t see much anymore such as the tortoise from The Tortoise and the Hare (1934) or Hiawatha (1937). The newest characters that I see are Uncle Scrooge and Bongo, the bear who appeared in Fun and Fancy Free. Both date to 1947. 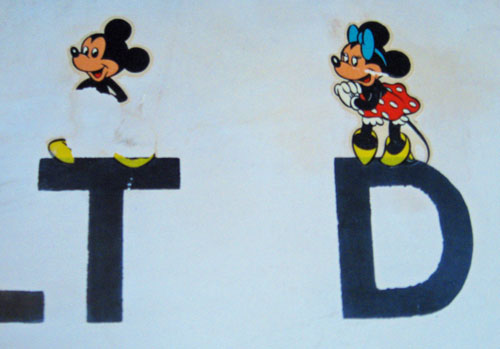 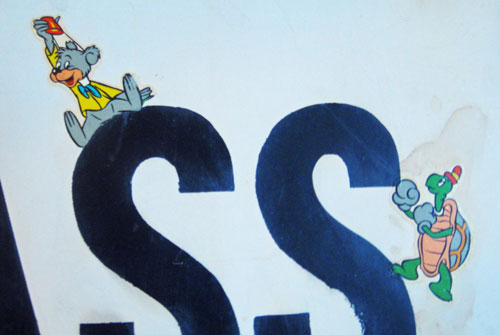 Based on all of this, I think the sign dates to about 1950 – give or take a couple of years. If that is the case, Walt Disney Productions would have been working on such projects as Cinderella, Alice in Wonderland, and Peter Pan. This sign may have stood guard when Davy Crockett was being filmed and when Disneyland was in the planning stages. It is also when the great man himself – Walt Disney- was still in charge of his kingdom. There is no shortage of vintage Disney items out there, but I suspect it will be a long time before I see another one of these. Leave it to Disney to find a way to say “Go Away” and make you feel happy about it.