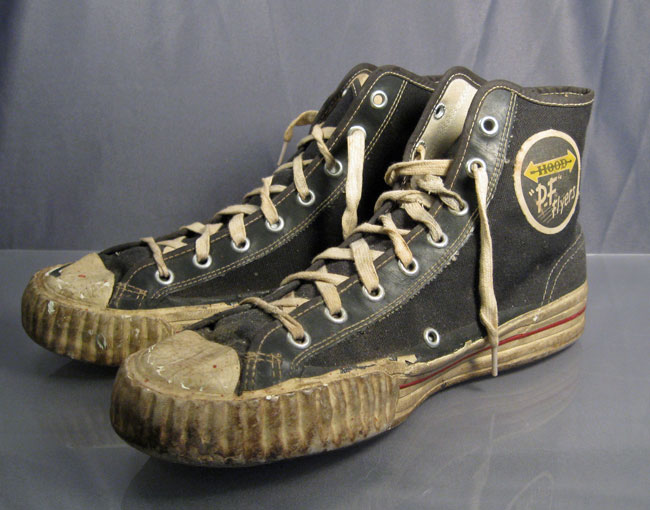 I make no secret that I am on an endless quest to recapture my childhood. Was childhood really better in the 1950’s and 1960’s than it was (or is) for later generations? Most of us who were alive at that time would say yes. Most of you who were unfortunate enough to be born later would probably disagree. Of course, you would be wrong, but there’s not a lot you can do about it.

Besides playing with all our “Made in USA” toys, we had a lot of time to go outside and “run around”. Parents weren’t quite so worried that every waking minute of childhood be taken up with some organized activity designed to make you outstanding enough to get into an Ivy League school. Since we also didn’t have video games to keep us quiet, we were encouraged to go outside and entertain ourselves. 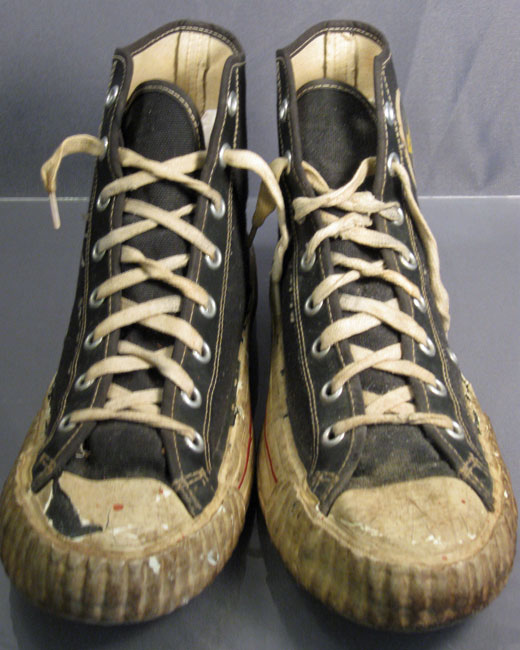 This well-worn pair of PF Flyers has been preserved for over half a century.

Anyway, running around is actually the point of this article. Running around in PF Flyers that is! Brand loyalty meant something in those days, and when it came to “sneakers,” you were most likely a “Keds” or “PF Flyers” kid. I was definitely in the latter category.

PF Flyers were manufactured by the tire company B. F. Goodrich and first introduced in 1937. PF stood for “Posture Foundation” which meant there was a wedge inside the shoe that more evenly distributed your weight. The promise was that you could “run faster and jump higher” with a pair of “PF’s” strapped to your feet. I totally believed this to be true! Putting on a new pair of PFs felt like you were walking on a cloud, and running as fast as you could to test out your new superpowers was part of the routine. Unfortunately, one of the more negative realities of growing up in the 1950’s and ‘60’s is that dog poop seemed to be everywhere. Once, while racing down the street, I managed to find a fresh pile with my brand new sneakers. What a mess! 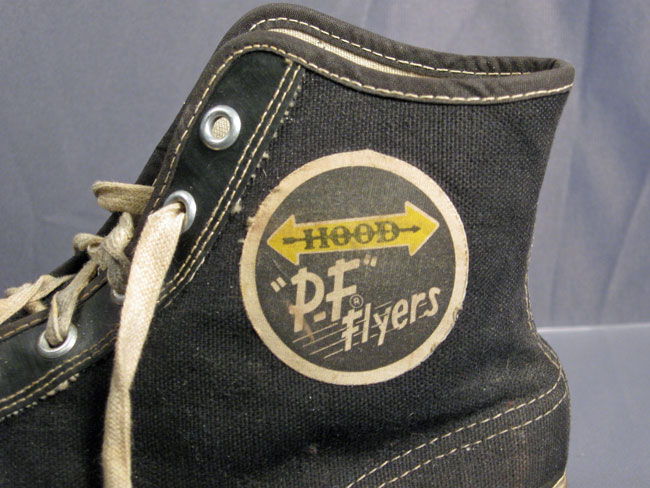 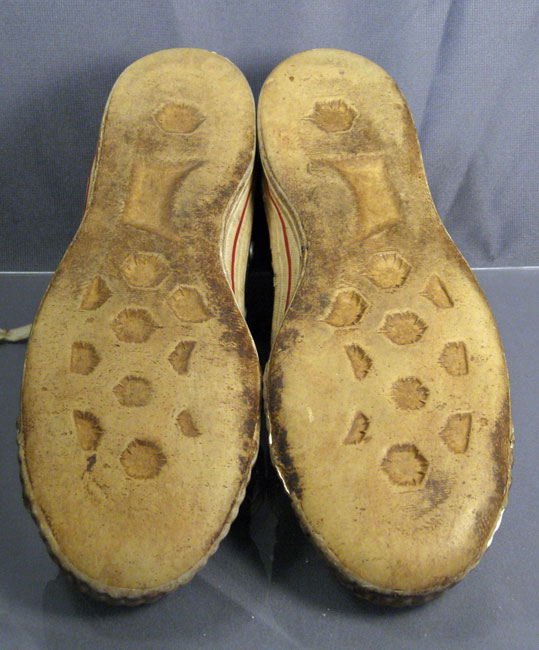 I found this vintage and well-worn pair of boy’s sneakers at a flea market last year. Why they got saved is anyone’s guess. They are marked Hood PF Flyers. I found out that BF Goodrich purchased Hood Rubber Company in 1929 and the Hood named was used until the late 1950’s on some PF Flyers. I also found a reference indicating that the Hood name was used in 1962. I think it’s safe to say these sneakers date from the late 1950’s to the early 1960’s.

Of all the things I have collected, I think these old sneakers represent the essence of boyhood in the middle of the twentieth century as well as anything. After all, no matter how humble your upbringing, just about everyone had a pair of worn out sneakers at some point in their youth. 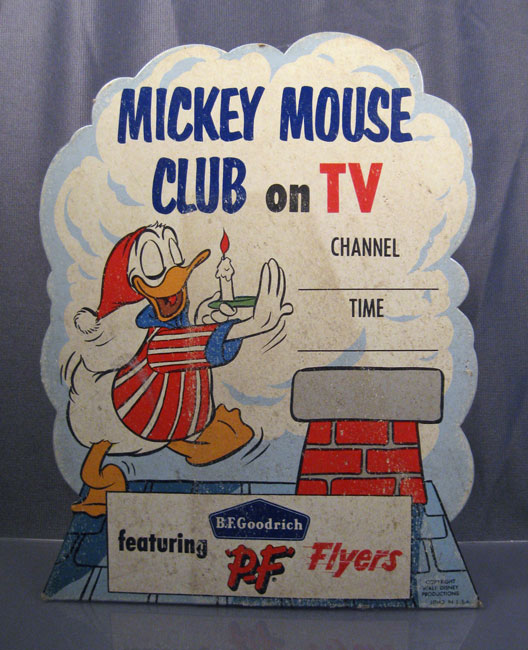 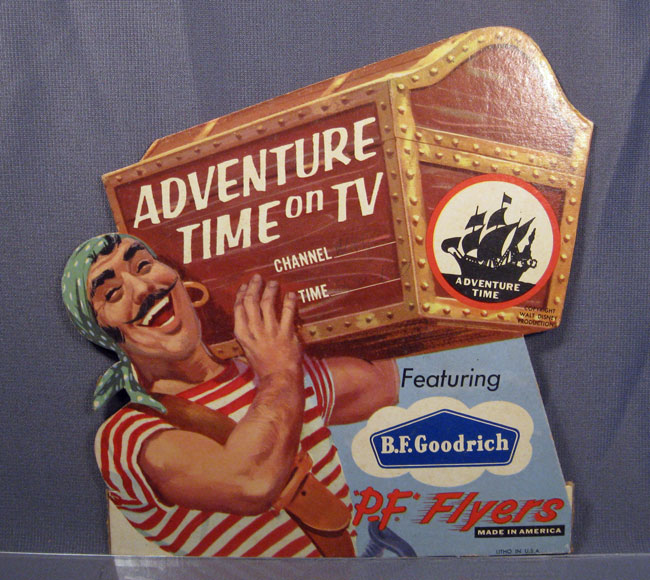 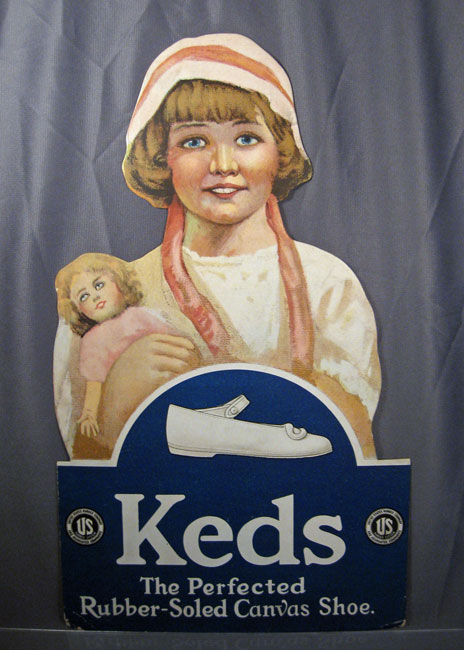 Based on the girl’s hair style as well as the style of shoe, this cardboard Keds advertising display piece probably dates to the 1920’s or 30’s.

PF Flyers are once again available thanks to the company New Balance. At least there’s less dog poop to worry about these days.