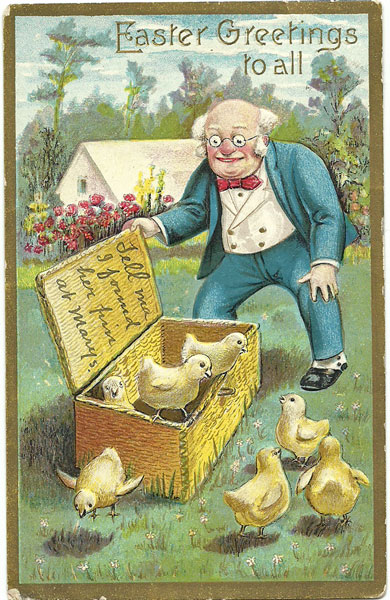 I’m not old enough to personally remember Foxy Grandpa, the comic character. In fact, even my parents were born too late to remember his debut on January 7, 1900 in the New York Herald, and his popularity was already waning when my mother was a toddler. Still, even without any knowledge of his comic strips or books or stage production, the minute I first encountered him, I was smitten by the cute little old guy with white hair and a bald head, round glasses, and a spiffy suit and vest.

Foxy Grandpa was the creation of Carl E. Schultze, who was born in Lexington, Kentucky in 1866. Schultze’s childhood nickname was “Bunny,” and he usually signed his cartoons as “Bunny.” He also created a cute white bunny character that often shows up alongside Foxy Grandpa. This pinback button shows the bunny and the two grandsons along with Foxy Grandpa himself. 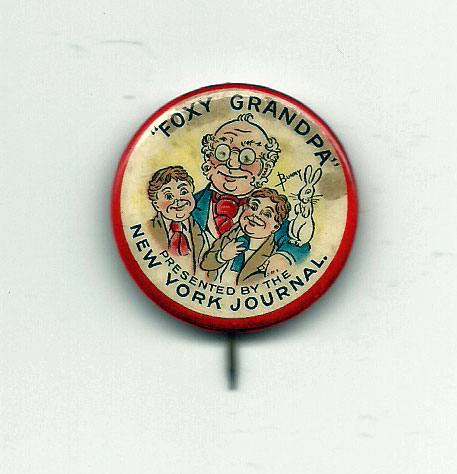 Foxy Grandpa is right up there with the earliest of the American comic characters like the Katzenjammer Kids and the Yellow Kid. His stories revolve around those two mischievous grandsons, Chub and Bunt. While they try to trick their grandfather and play jokes on him, he turns the tables on them and foils their plots, often making them look mighty foolish in the process.

Within two years of his debut, Foxy Grandpa was so popular that a Broadway show was created with him as the central character. He was played by actor Joseph Hart. Clearly, the show had a successful run because here is a pinback button that was issued during the show’s second year, which would date it to 1903-04. 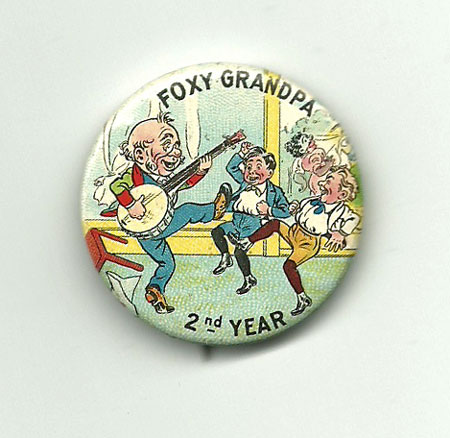 This button measures one-and-a-half inches in diameter and was made by the Whitehead & Hoag Company of Newark, NJ. It is in pristine condition and has a wonderful paper label on the back with the following information: Grandpa You’re a Wonder!/ 2nd Year/The Musical Snapshot/”Foxy Grandpa”/Book by R. M. Baker/Music by Jos. Hart.

Joseph Hart went on to play Foxy Grandpa in several Biograph short silent films. A portion of one of those films still exists and here is a link to it:

Between 1900 and 1917, Foxy Grandpa was a staple on the comic pages of several New York newspapers. More than thirty books about him were published by four different publishers during that time. And, like other popular comic characters of the day, toys and games featuring Foxy Grandpa made their way into the market. Fortunately, some survived and made their way into the hands of collectors like us. Here are two of our favorite Foxy Grandpa toys. Both are German candy containers, both have an Easter theme, and both have been in our possession for over 35 years. 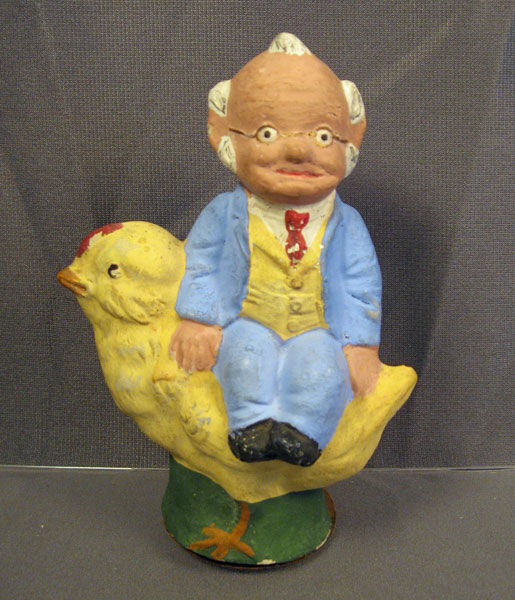 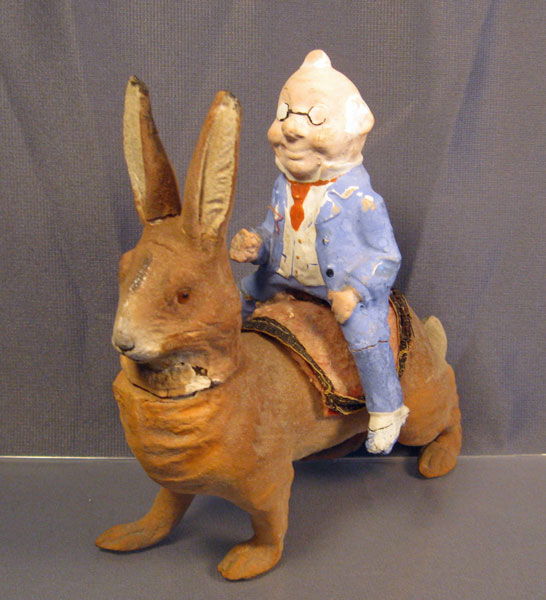 The following photo shows a few more Foxy Grandpa collectibles. There’s a small jointed composition figure, a composition bobble-head figure, and a plaster container that might have been used on a desk to hold pencils. 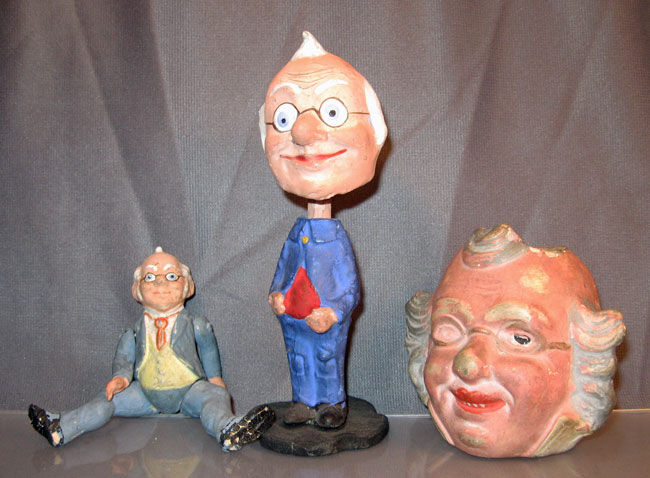 Finally, it’s clear from this object that Foxy Grandpa was a hit with the adults as well as the kids. It’s a well-made porcelain toby mug, and while I suppose a child could have sipped his milk from it, more likely it was meant to be displayed on a knickknack shelf. 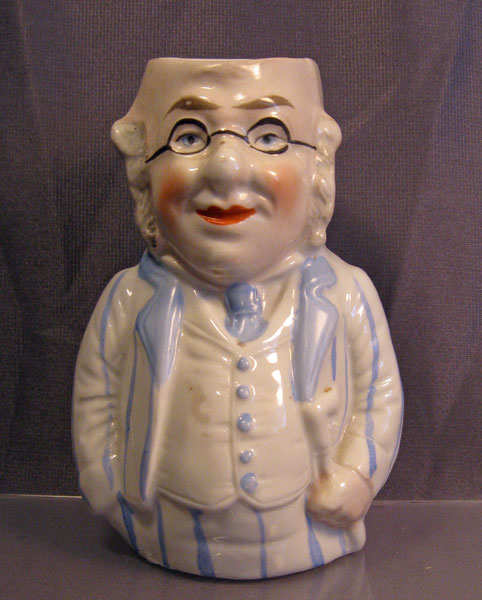 During Foxy Grandpa’s heyday, Carl Schultze lived the good life on Park Avenue. While Foxy Grandpa stories continued to be distributed by the Newspaper Feature Syndicate throughout the 1920’s, Schultze faced personal problems and mounting debts. By the 1930’s, he was down on his luck and illustrating school books through the WPA (Works Progress Administration). Sadly, when he died in 1939, the headlines said that he died a pauper.

But for a couple of decades in the early 20th Century, Bunny Schultze made us smile over the antics of an energetic little old man who could outsmart his grandsons. And he helped set the stage for other artists to create memorable, amusing comic characters. Young Walt Disney, growing up in the first decade of the 20th Century, most likely was quite familiar with Foxy Grandpa. Schultze may have had very little left to his name when he died, but hanging on the wall of his one-room apartment was a picture of Mickey and Minnie Mouse with the inscription, “For Carl E. Schultze, in admiration. Walt Disney.”