Since we last gave attention to Dwight Eisenhower, a Republican, it seems only fair that while the election season is still only a few weeks behind us, we pay some attention to his Democratic predecessor – Harry S. Truman.

It is also an opportunity to tell you about my favorite purchase on our recent cross-country trip. 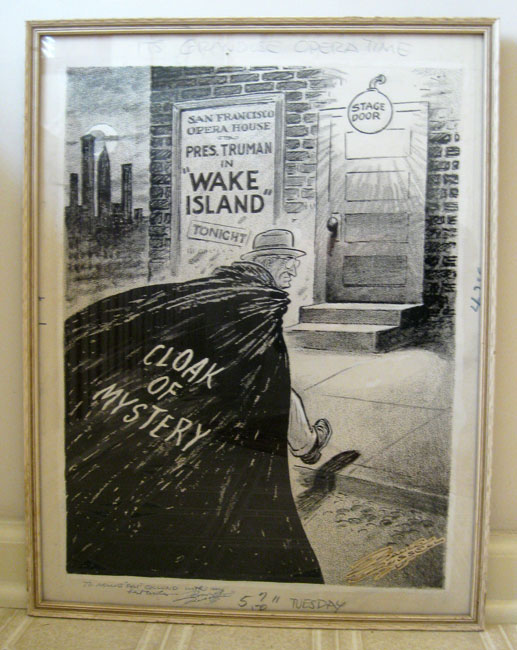 We were finally heading east, but our trip was far from over.  We were in Arizona, had visited the Grand Canyon, and were spending a couple of nights in Sedona.   While Sedona offered beautiful scenery and a very “New Age” vibe, our first love of antiquing drew us to nearby Prescott, which was about an hour away.  Prescott is a very clean little city with a nice park, an interesting museum about Arizona history – and a lot of antique shops.

The shops we visited had, for the most part, a good variety and good quality of merchandise so finding a few more treasures to stuff into the back of our little car wasn’t going to be a problem.  Money, of course, doesn’t grow on trees and by this point in the trip, we were starting to be a little more selective in our purchases.

Naturally, I found something in the first shop we visited that I couldn’t live without.  I had pretty much gone through the entire shop when I came to one of the last booths I needed to visit. There it was!  Sitting on the floor was an old, framed political cartoon with the obvious likeness of Harry S. Truman.  I picked it up and could see that this was an original artwork and not merely a print.  There was an inscription at the bottom that read “To Nellie ‘Pat’ Eklund with my best wishes – Bruce Russell.”

Fortunately the dealer had done some homework and put a note with it saying that Bruce Russell had been a political cartoonist with the L. A. Times from 1942 through 1963 and that Nellie Eklund had been a resident of the Prescott Valley area since 1991.

In the shop, I noticed the reference to Wake Island on the cartoon and was fairly sure what the subject matter was all about.  A little bit of quick research on the internet confirmed my suspicions.  On October 15, 1950, President Truman flew to Wake Island in the Pacific to meet with General Douglas Macarthur concerning the Korean War. 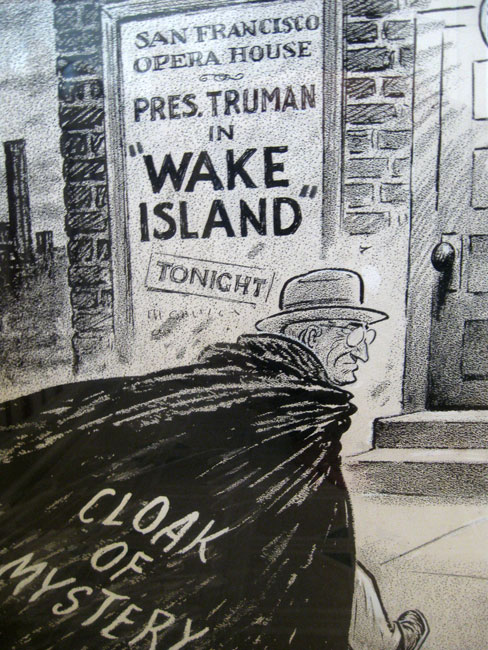 MacArthur was by that time considered one of the greatest generals of the twentieth century.  He was a hero in World War II, overseeing Japan’s surrender on the Battleship Missouri in Tokyo Bay, and essentially ruled Japan after the war.  He was now in charge of US forces in Korea but wasn’t always following what the Truman administration ordered him to do.  This meeting was set up to make sure everyone was on the same page.

After the meeting, Truman then flew to San Francisco and on October 17, 1950, announced the results of his meeting with General MacArthur at the War Memorial Opera House in that city.  The cartoon from October 17 deals with that upcoming speech. 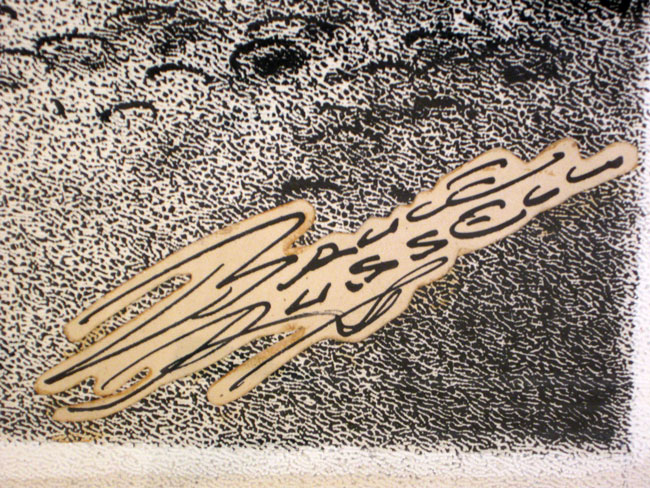 Having visited the Truman home and library in Independence Missouri earlier in the trip only made this find more special.  I’m sure Harry Truman would not have been thrilled with how he was depicted in this cartoon, but it underscores the many challenges he faced as president.  Truman was far from the most popular president at the time.  History, however, has been kind to him, and he now ranks among our better leaders.  He is a personal favorite of mine.

To sum it all up – finding an original political cartoon drawn by a Pulitzer Prize winning artist for a major newspaper about one of the most important events of the Truman Presidency for a mere $33.75 was for me what collecting is all about – the thrill of making a great find!

I didn’t even have to wait for Black Friday.