History is written by the victors…and that applies to action figures as well. Ask anyone who remembers their toys from the 1980s, and they will almost inevitably rattle off one of four toy lines immediately: Star Wars, Masters of the Universe, G.I.Joe: A Real American Hero, or Transformers. Beyond that, there are a number of other popular toy lines, such as Thundercats, Super Powers, Indiana Jones, M.A.S.K., that inspire the same type of fanatical devotion from collectors.

However, there were literally hundreds of different toy lines that debuted during the decade of the Reagan administration, and sometimes, even the experts can get stumped by a set of toys that they’ve never seen before. While I had all of the aforementioned toys as a kid, I did tend to gravitate toward some of the stranger, more unknown lines that were available, especially if they were deeply discounted. Unfortunately, these lines were produced in such small quantities that even if you know what you’re looking for, finding them at all several years after their release at retail can still prove to be an incredible challenge. 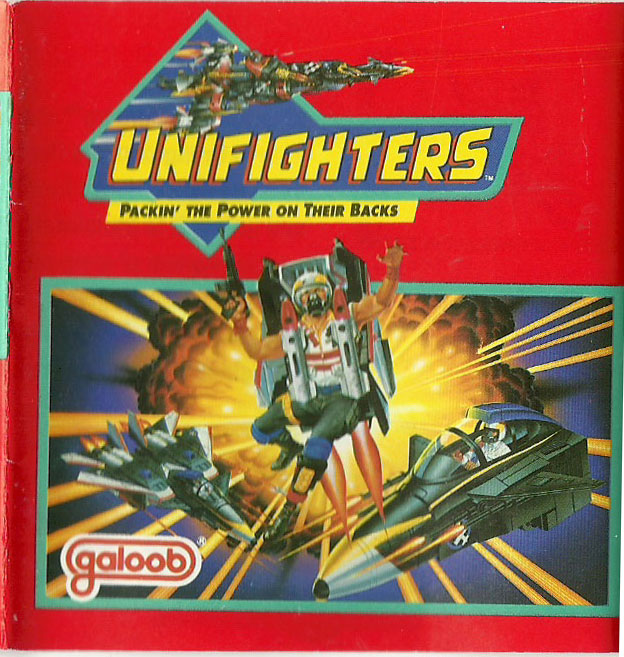 Unifighters was a line made in the classic 3-3/4” scale that served as an industry standard for many lines thanks to the success of Star Wars and G.I.Joe. These were not made by a no-name toy company, but rather by Lewis Galoob Toys (makers of the classic Micro Machines toys). This was not their first action figure line, but it was their first that specifically targeted the same kids who liked G.I.Joe. G.I.Joe inspired several knock-off lines of lesser quality, but Galoob’s attempt here was admirable…even if they ended up reusing the same heads, arms, legs, and torsos for most of their line.

While the action figures themselves were rather generic military men, the “gimmick” that drove the line was a series of transforming backpacks. The figures were divided into four different squadrons: Combat Jet Squadron (white), Navy Hovercraft Squadron (blue), Marine Combat Chopper Squadron (yellow), and Army Battle Tank Squadron (red). Four branches of the military, four somewhat appropriate vehicles. Gee, I wonder what happened when you attached the awkwardly shaped backpacks to one another?

I remember seeing these for sale only once as a kid. We were on vacation and we stopped at a Toy Liquidators in a mall. Toy Liquidators was a store that was stocked with slightly older and perhaps outdated toys, but everything was drastically reduced in price. However, because they would often get closeout deals, there were some toys that didn’t sell well enough at larger stores to receive large orders, so many toys that ended up at Toy Liquidators almost became exclusive merchandise for the chain of stores, as it was difficult to locate them anywhere else. As a kid, I could care less. If I hadn’t seen it before, I didn’t care if it was four or five years old and didn’t sell well enough to warrant large orders. I wanted what I wanted. And I wanted Unifighters, dammit!

I remember that you could either buy the figures individually on cards, or you could purchase boxed sets with each of the four squadrons already complete. I’m not sure whether I was unable to convince my parents to go for the larger hovercraft or the tank or if I just liked planes so much, but I went with the Combat Jet Squadron. 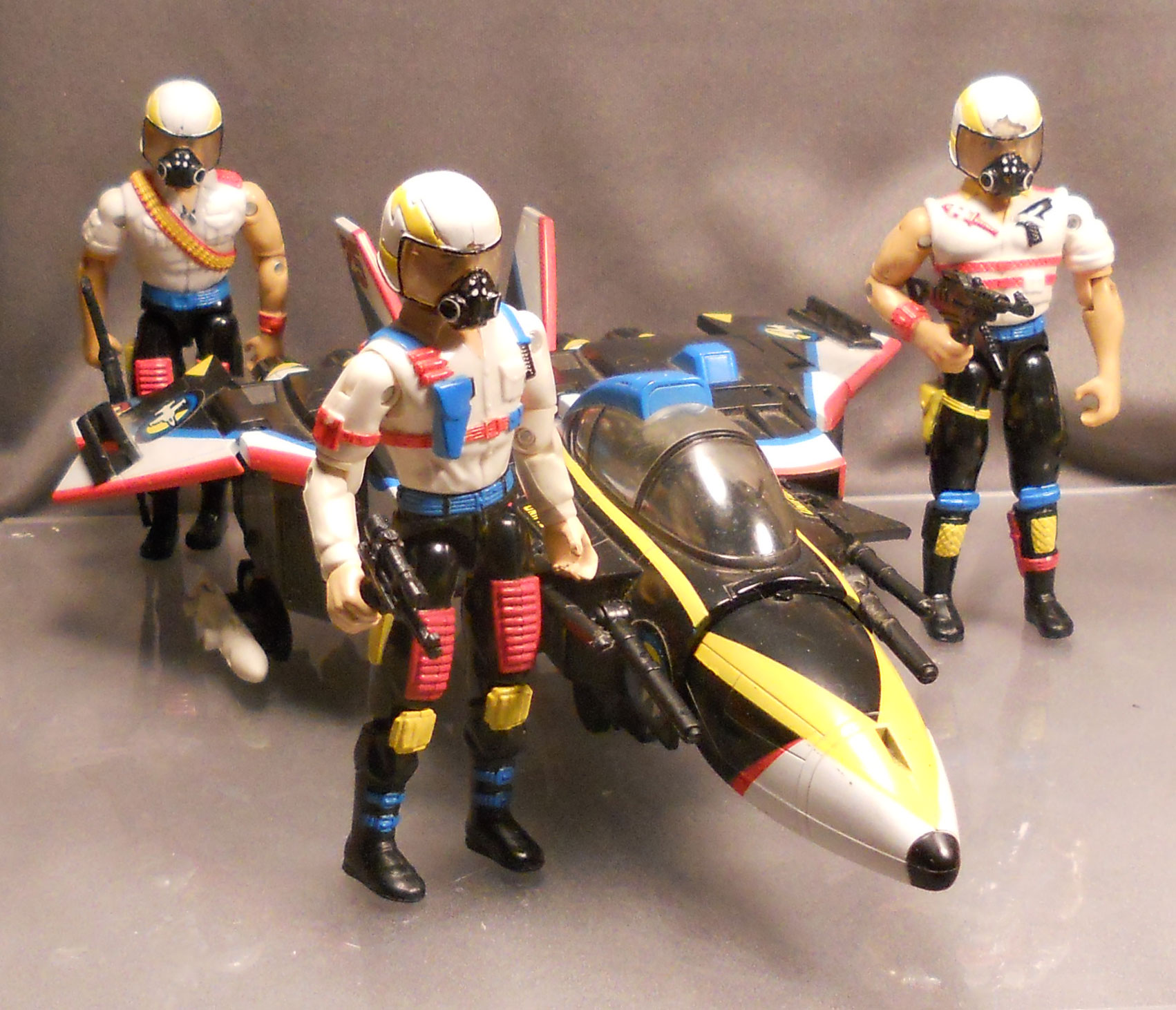 Sadly, this is not the one I owned. My sister and I have managed to find bits and pieces to the one I owned, since it was the only set I ever ended up getting as a kid, but since we played with them, various parts got scattered to the wind. Fortunately, there’s always eBay, and I managed to score a set recently. While not in mint condition, everything was there, and I could relive my childhood just a little bit. 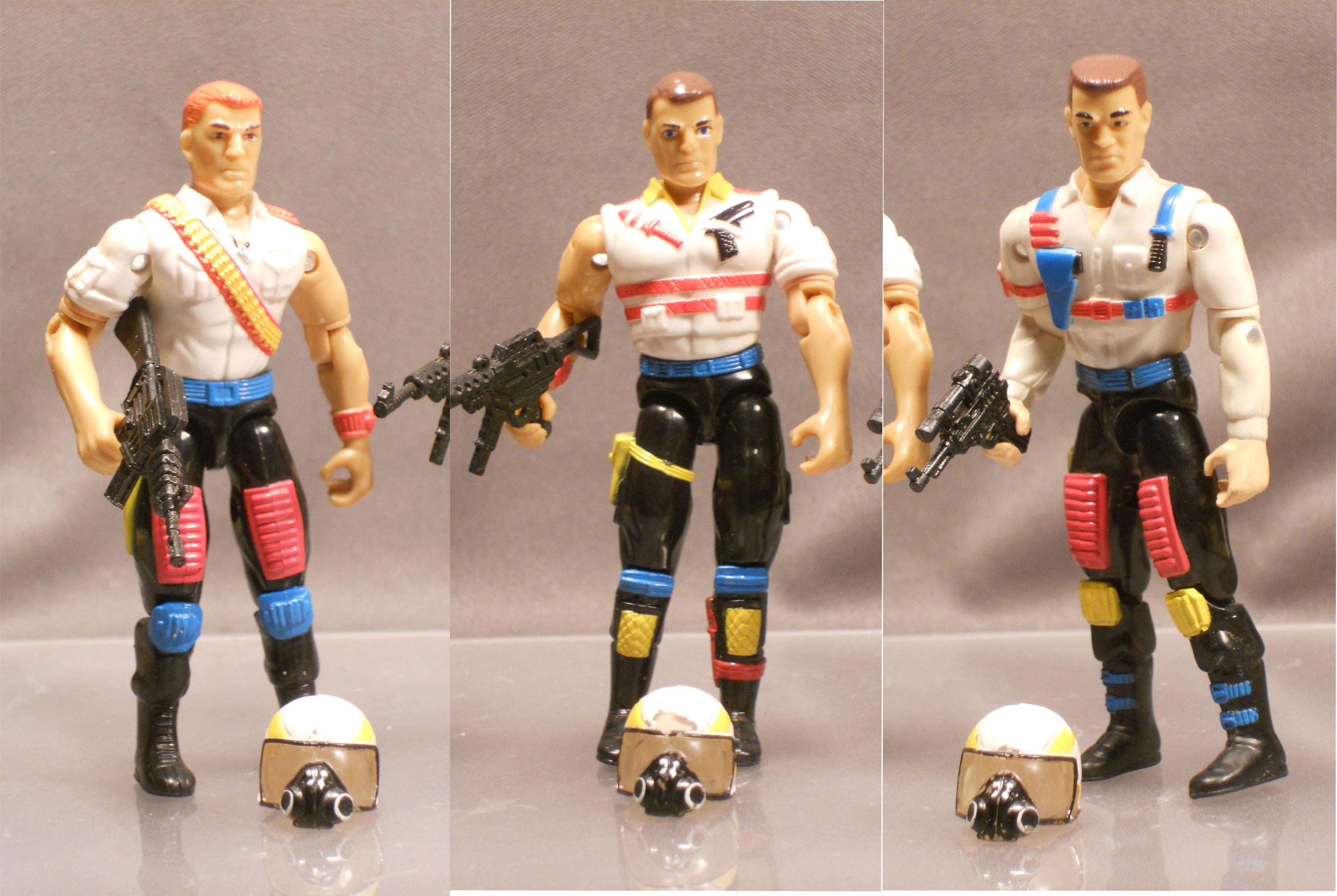 The jet is really cool looking, and the figures are well made. It’s a shame the line didn’t take off like the folks at Galoob had hoped. I get the feeling the line was facing too much competition, and at the time these were released (1988), Ninja Turtles absolutely dominated the marketplace, so I get the feeling these got lost in the shuffle. Also, why didn’t they make any bad guys? Who were these military men going to end up fighting? Then again, they may have been designed like most knock-off lines and intended to be played with right alongside G.I.Joe. Still, they could have fought aliens or something who utilized the same combining backpack technology. 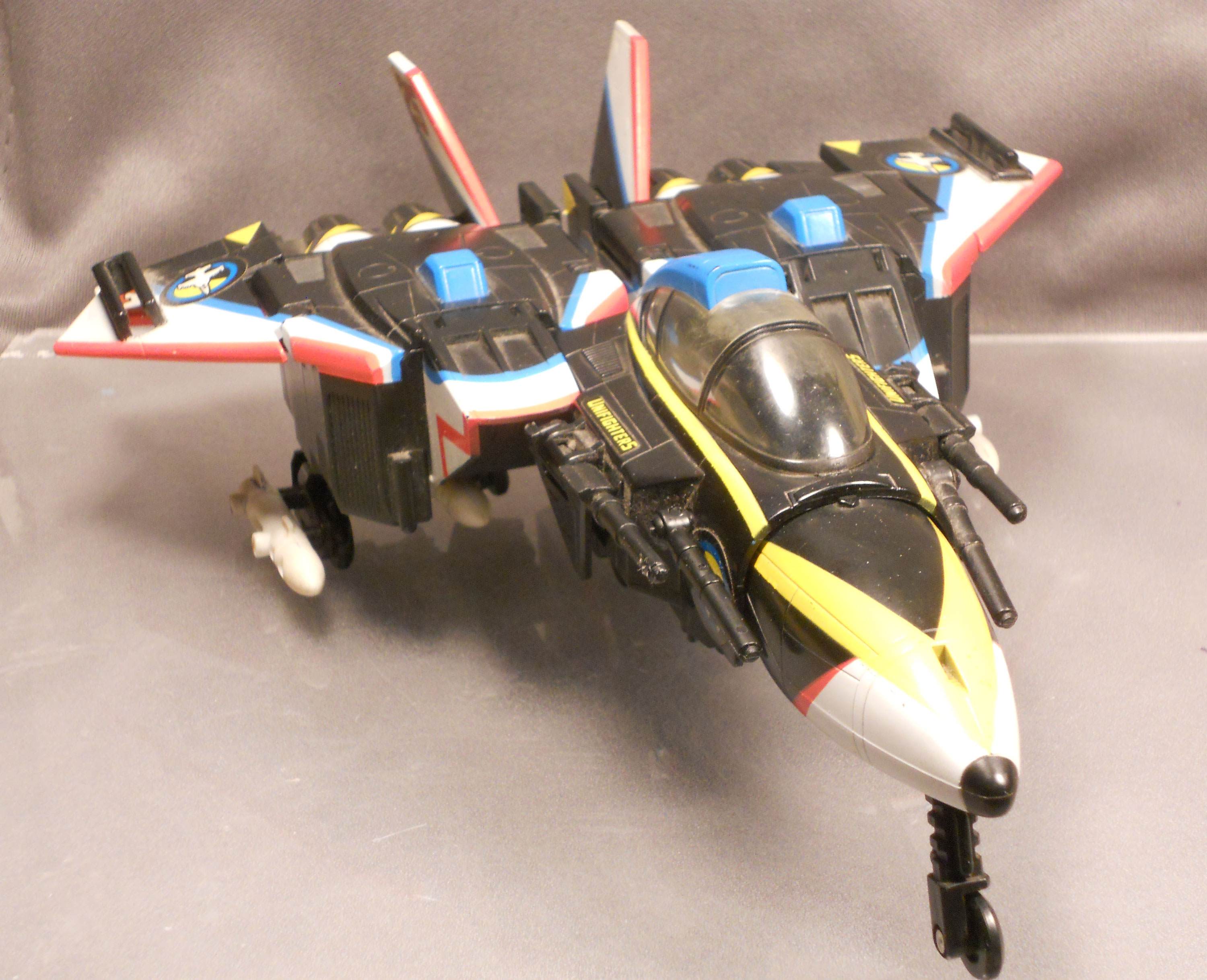 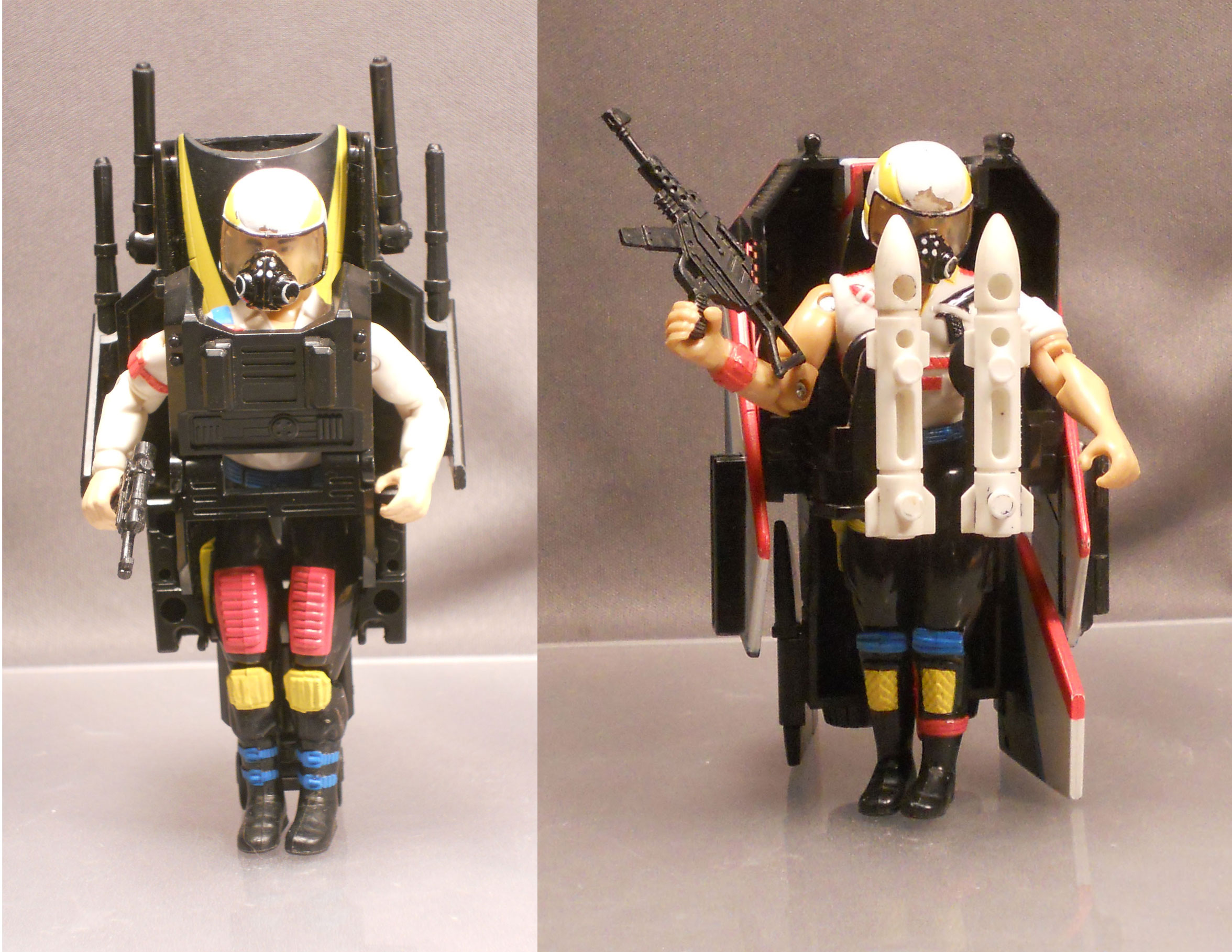 Unifighters are incredibly difficult to collect today, so I’m not sure that I’m going to end up pursuing a complete set. However, I like having a complete piece that takes me back to a very specific moment in my childhood, and maybe this entry can help others remember a long-forgotten toy line of the late 1980s.