It Seemed Like a Good Idea at the Time

I have noticed in my years of collecting that sometimes I seem to find objects that have a connection to each other within a short span of time.  This phenomenon just happened to me in the past month as I found two items related to Prohibition.

Prohibition, of course, is best known as the period between 1920 and 1933 when the Eighteenth Amendment to the Constitution banned the sale of alcoholic beverages in the United States.  The Temperance Movement which led to that result had a long history before then with its origins going back almost as far as the beginning of the nation.  It may seem sort of quaint to us in the twenty-first century but it was serious business back then.

I don’t know how many of these ribbons are out there but this is the only one I have seen and I had no problem shelling out $75.00 for it.

The second object I picked up earlier this month is really neat.  It is a metal wall plaque made in the shape of a hatchet with the words, “Nation’s Joint Smasher” boldly on the handle.

The hatchet was the symbol of one of the most colorful characters in the Temperance Movement – none other than Carry A. Nation.  (Yes, that’s her real name!) 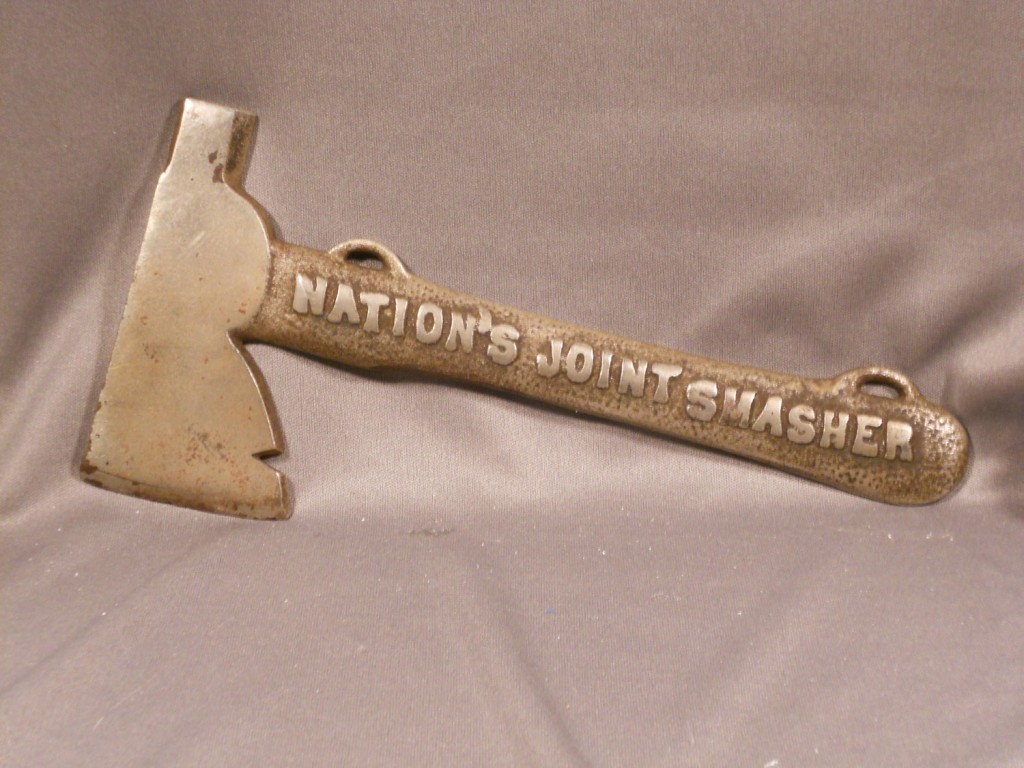 Carry Nation (1846-1911) was certainly one of the most unique individuals of the movement and is best known for her “hatchetations” which meant bursting into saloons and smashing things up with a hatchet!  She did most of her damage in Kansas between about 1900 and her death in 1911, but her fame was widespread.  She even carried her message to vaudeville houses in New York City and music halls in England.   Little hatchet pins were sold where she would speak as souvenirs and as a way to help with her legal costs.  The hatchet wall plaque was also part of this and would date to the period when she was most active in the first decade of the twentieth century.  I acquired this piece for $65.00, and it is also the only one I have come across.

I always find objects like these dealing with American history fascinating.  Although the Prohibition Movement was ultimately successful in achieving its goal, Prohibition itself proved to be more of a curse than a blessing, leading to organized crime and widespread corruption and abuse of the law.  It was finally repealed in 1933.  That in itself is another story.