Tiki mugs are one of my many collections that fit into the mid-century category of collecting.  They are colorful, whimsical, and I can usually pick them up for not a lot of money at flea markets.  Though many different mug designs were available for mass market consumption, and new mugs are still being created today, some of the best designs were created for specific restaurants.  Because very few of these Polynesian restaurants of the ‘50’s and ‘60’s had more than one location, these mugs have become desirable for tiki mug collectors. 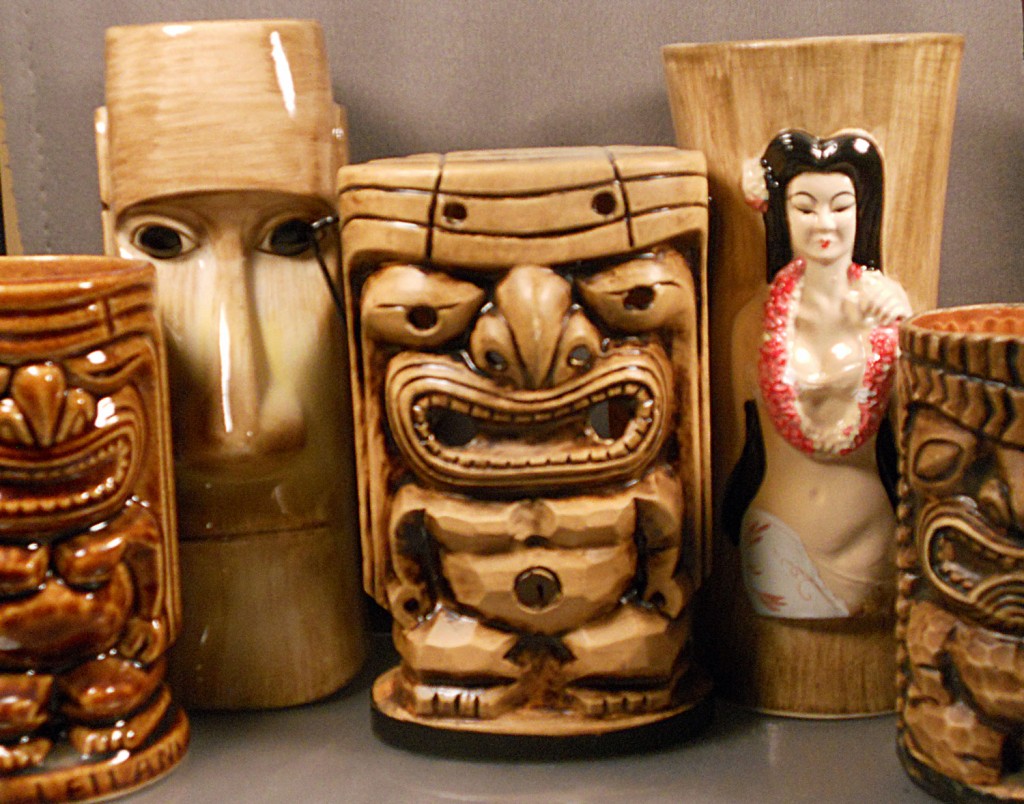 A lot of times tiki’s are very brown.

Polynesian themed objects really came into vogue when Hawaii became our 50th state in 1959, but people have always been attracted to the lures of Hawaii and objects that remind them of tropical places.  Polynesian themed restaurants, though much more prevalent in warmer climate and coastal states, became popular all over the country.

Of course, being from New Jersey means that regional mugs are a little bit hard to come by because, well, there were never really many Polynesian restaurants to choose from. There was, however, one spectacular restaurant present in Cherry Hill, NJ. 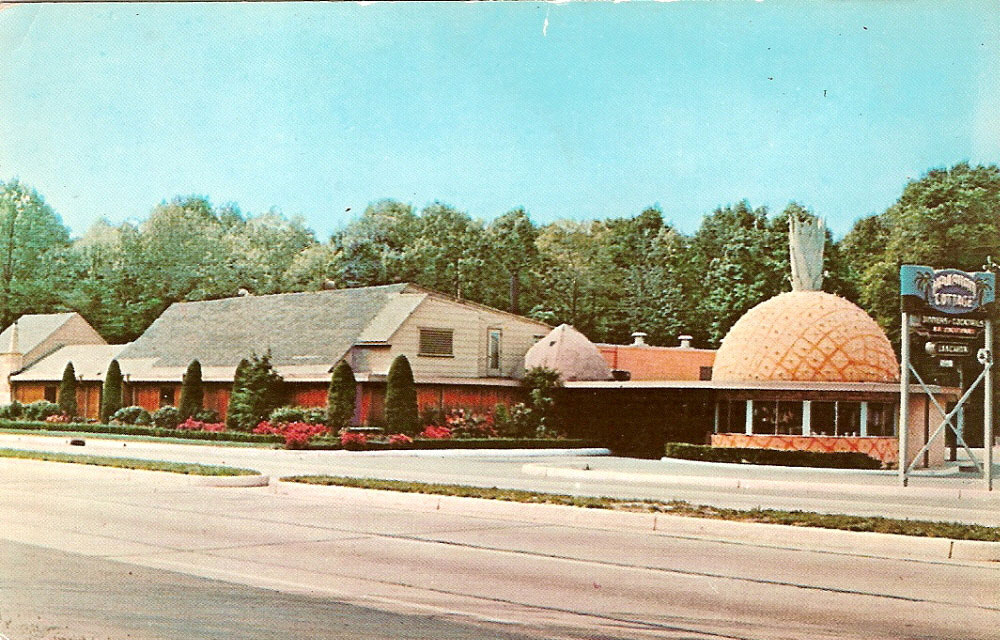 It was called the Hawaiian Cottage, and it opened its doors in 1938.  It is important to understand a little bit about Cherry Hill in the 1950’s.  First of all it didn’t become known as Cherry Hill until 1961, before that it was Merchantville, NJ.  Second, it was very different from the chain restaurant and chain store mecca it has become in more recent years.  Cherry Hill was home to The Latin Casino, which didn’t have gambling but hosted some of the biggest music and comedy acts of the day.  It was also home to the Garden State Park horse racing track, hotels, and many high end restaurants including the Hawaiian Cottage.  Outside of the entertainment industry that was so present in Cherry Hill, there was also a building boom of housing developments, which included among more traditional houses some spectacular Mid-Century Modern homes including a Frank Lloyd Wright designed house.  Besides houses, the one aspect of early Cherry Hill that still remains is the Cherry Hill Mall, which is considered the first indoor shopping mall east of the Mississippi.  When it comes to shopping and entertainment, the mall is the only thing that still remains.  Everything else has pretty much been bulldozed to make way for newer shopping and dining.  The site of the Hawaiian Cottage is now home to an Olive Garden.

No offense to the architect and designer of the Olive Garden, but your building is lacking a giant pineapple on the roof.  I sure wish that my drive down Route 38 still included a giant pineapple roofed building today.  Alas, the only remains of The Hawaiian Cottage are the little bit of memorabilia that resides at flea markets and on eBay including match books, postcards, menus, and tiki mugs. 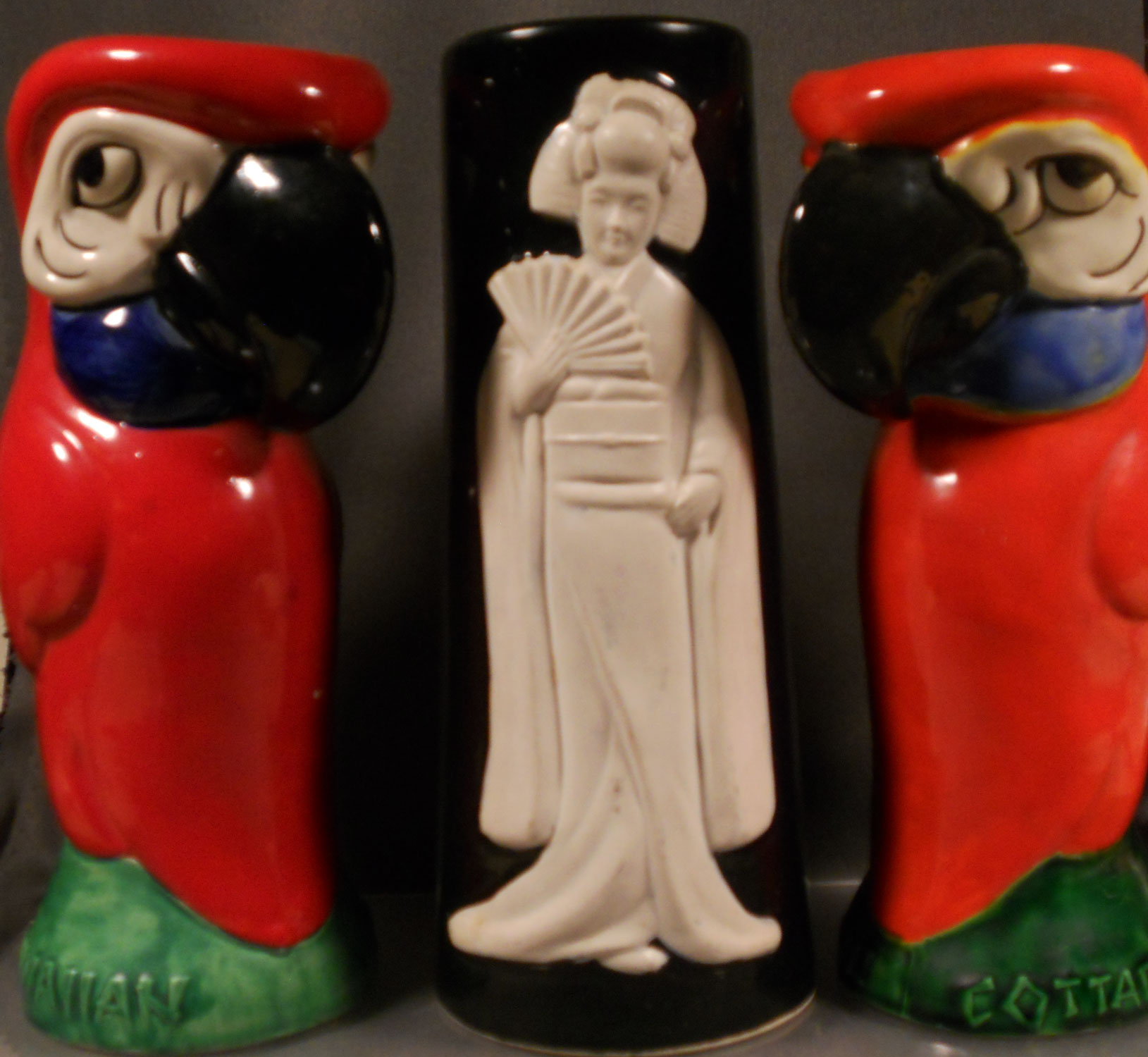 One of the most interesting things about The Hawaiian Cottage’s mug choices is that they are in no way typical when it comes to tiki mugs.  Most restaurants chose designs based on tiki idols or Easter Island Heads.  These, on the other hand, represent tropical birds and Geisha’s.  They were made by a company called Otagiri, which was a fairly major manufacturer of tiki mugs in the 50’s and 60’s.

The parrot mug was the first Hawaiian Cottage mug I was able to procure, and at first it seemed very hard to find.  I actually paid $15 to get one, which was the most I had ever paid for a mug at that time.  I had to have it though, because it was such a cool mug and the history fascinated me.  Since then, however, I have managed to find about 6 more and have paid as little as $1 to get them.  That being said, I am shopping within a pretty close proximity to the original restaurant.  If you are going to find this mug anywhere, it is most likely to be close to where the restaurant originally stood.    No matter how many parrot mugs I rescue, it is still my favorite mug in my collection because it represents so much more to me than the average tiki mug.  Also, no other restaurant made a parrot mug as far as I am aware, which makes it very unique and special. 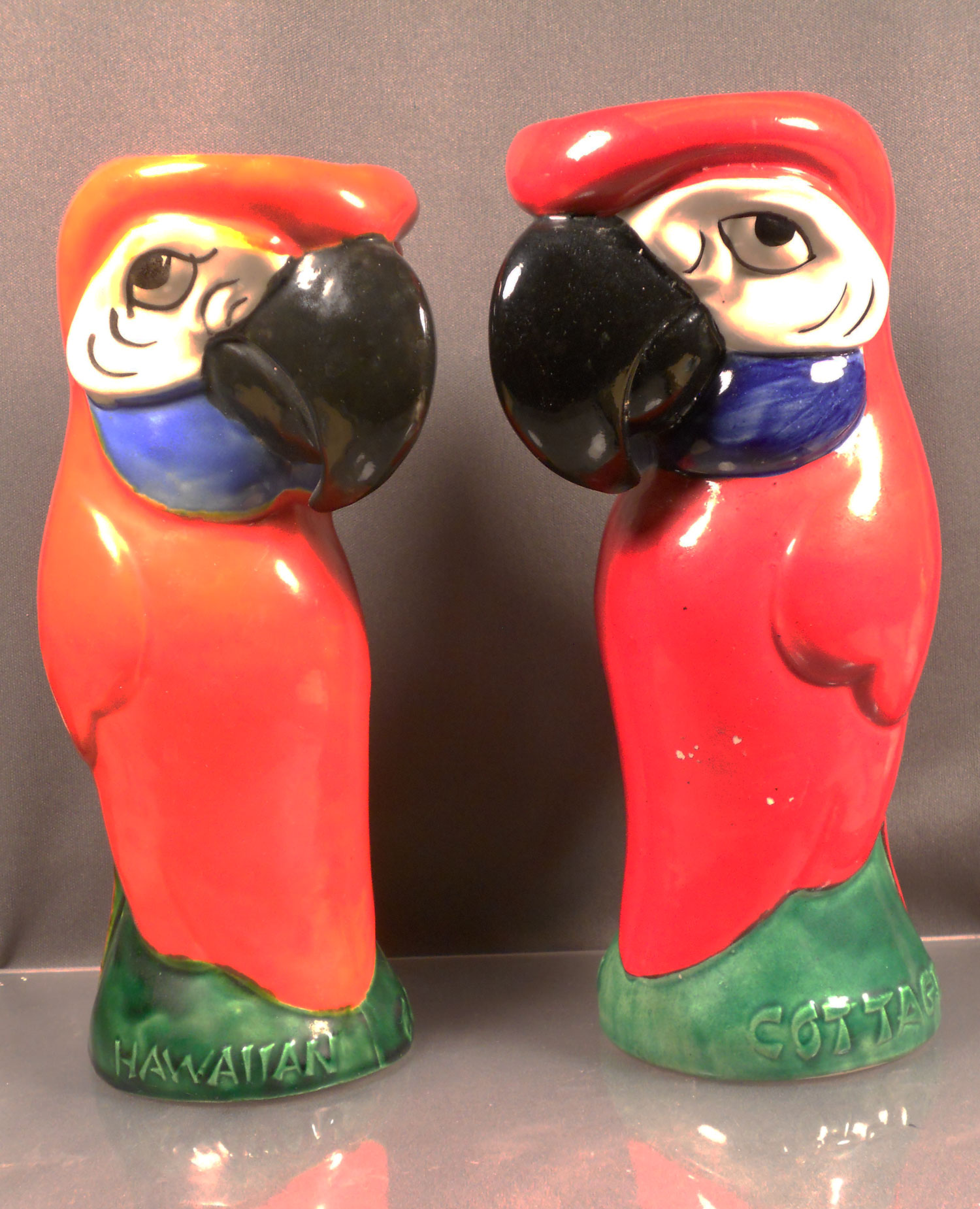 There are two variations on this mug that I have been able to find.  I don’t know that one is rarer than the other, but the main differences are in their size and color.  They have about a quarter inch difference between them, and the smaller mug is a more orange red, whereas the taller mug is more fire engine red.  There are modern replicas of this mug on the market as well that also come in other colors such as blue, green and yellow, but the easiest way to tell a genuine Hawaiian Cottage mug is that it has the name around the base.  Newer copies don’t have that. 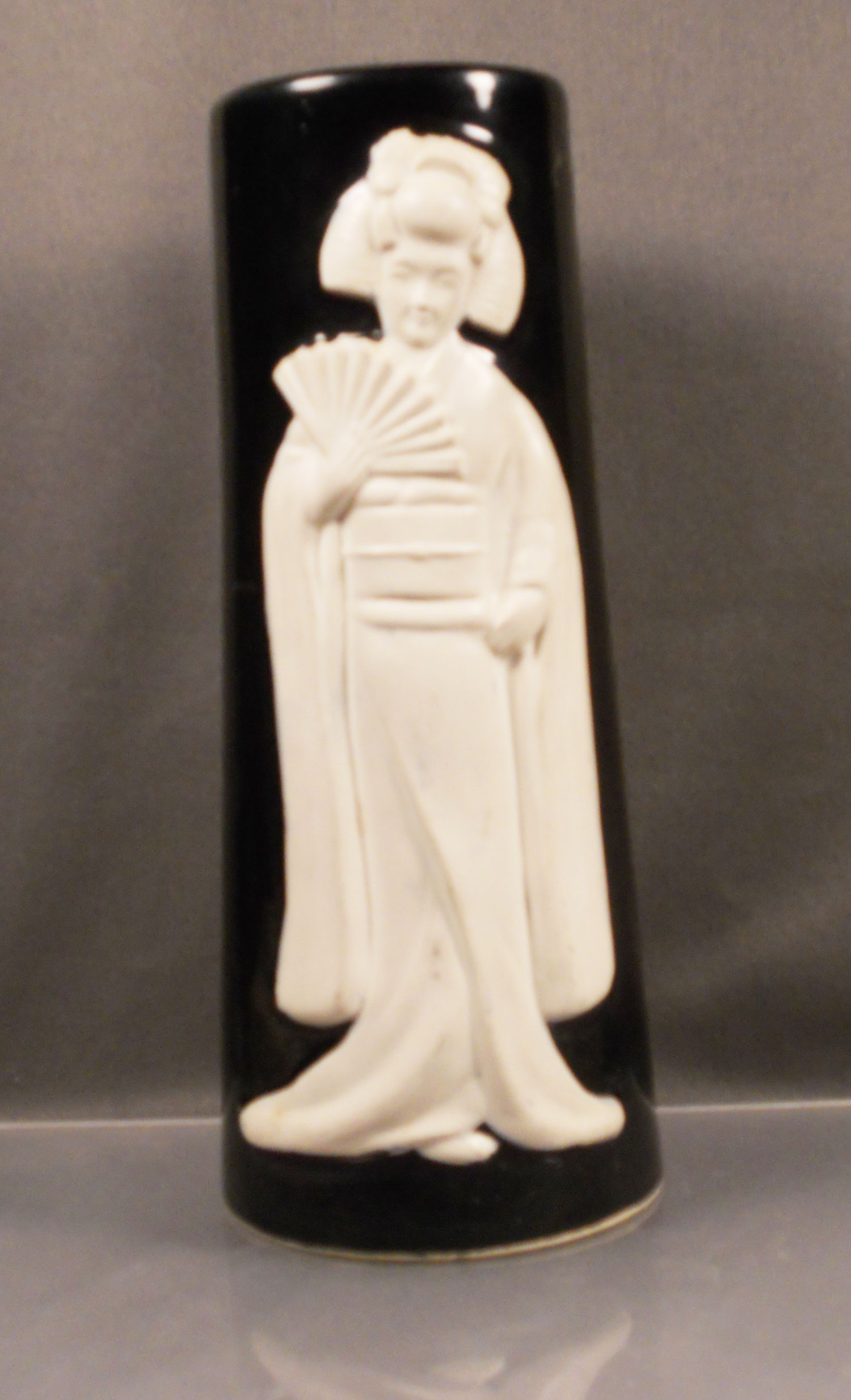 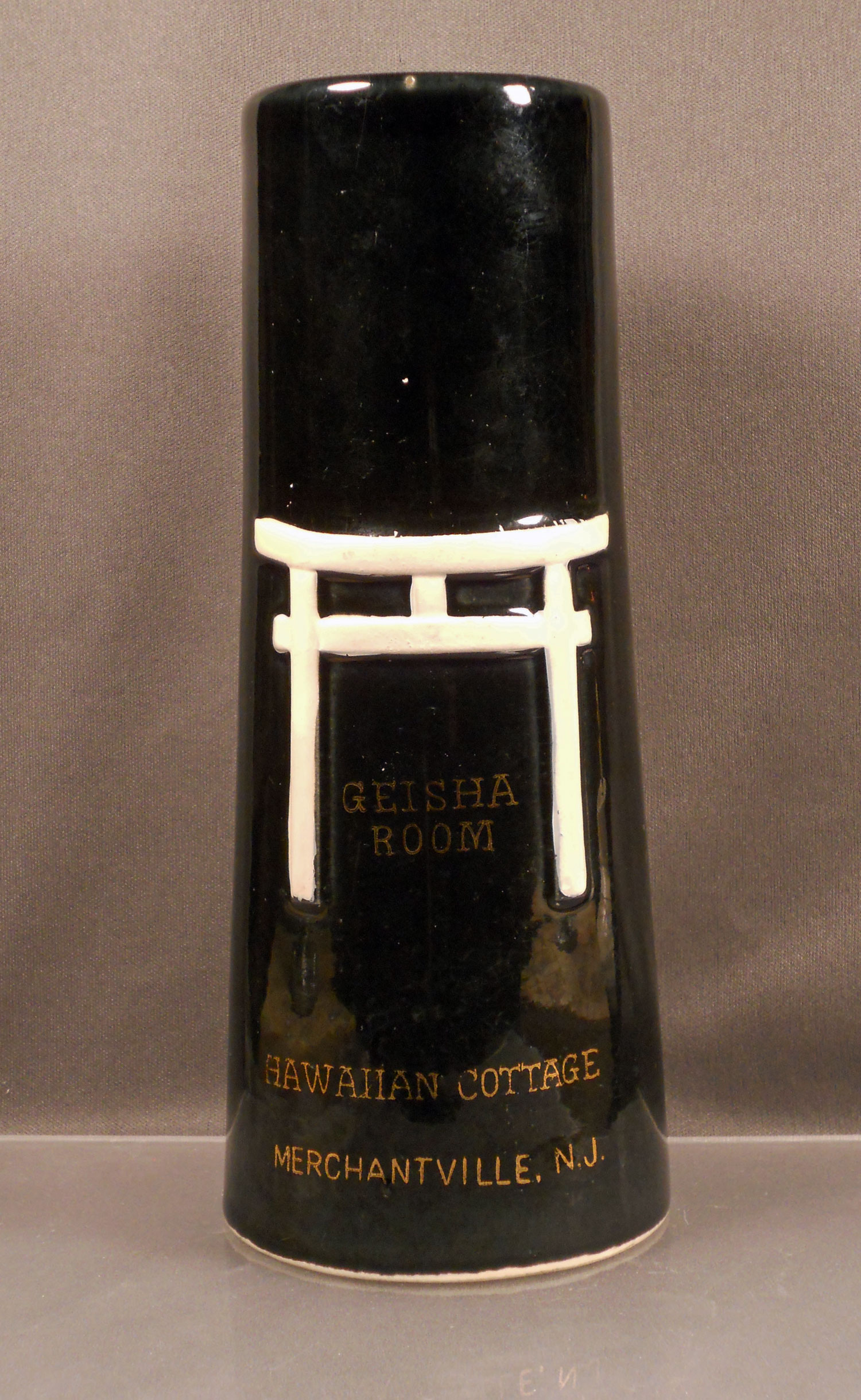 This Geisha Room mug, however, has been a little bit tougher for me to come by.  I have only been able find this one for my collection.  It isn’t the most obvious tiki mug, but Asian themed mugs are somewhat prevalent in tiki mug design.  A lot of Polynesian restaurants also served Asian cuisine, and some Chinese and Japanese restaurants had Polynesian themes to their decor.  There are two different versions of this mug as well.  The one I have pictured is the larger of the two.  Both mugs are very similar looking just like the parrots, but the smaller one has less writing on the back and is white on the bottom, whereas the larger mug is black on the bottom. 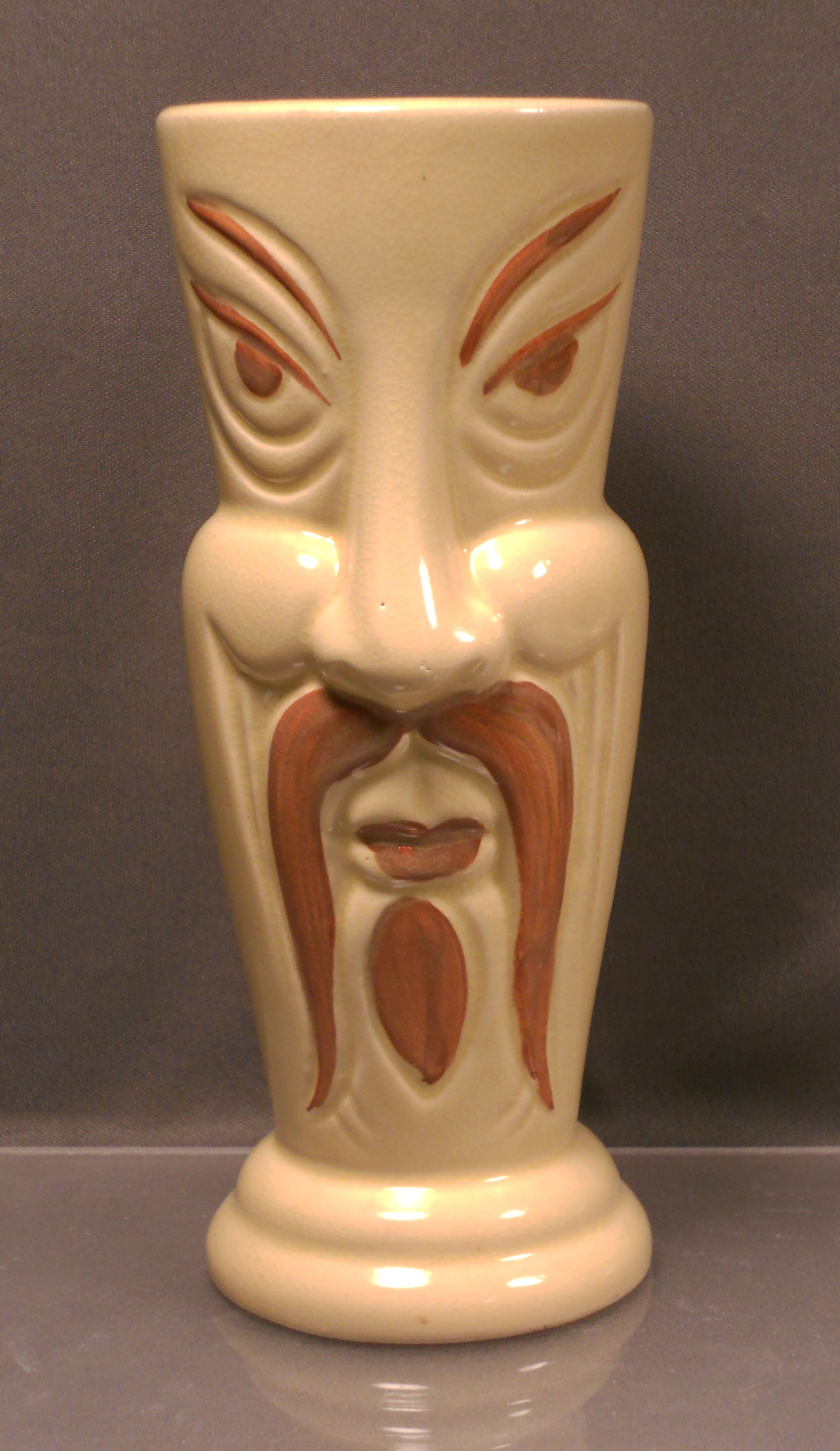 I have also heard rumor, though I haven’t found one myself, that there is a Fu Manchu mug design with the Hawaiian Cottage Name Stamped on the back.  It would most likely look a lot like this fella.  It isn’t quite as unique as the other two mugs, but I would be lying if I said I didn’t want one for my collection.

The Hawaiian Cottage closed its doors sometime in the 1970’s, and burned down later in the decade.  I was born too late to have ever been able to lay my eyes upon its pineapple dome.  Most people today probably don’t know that it ever existed.  The one amazing thing about collecting, though, is that we who are willing to rummage through boxes of junk at flea markets and yard sales end up finding these little relics from the past that remind us of what has come before us.  So, the next time you are driving down Rt.38 in Cherry Hill, NJ and you happen to decide that you are in the mood for some Olive Garden, think of how much cooler it would be to be sitting under a giant concrete pineapple drinking out of a parrot.

5 Responses to The Hawaiian Cottage