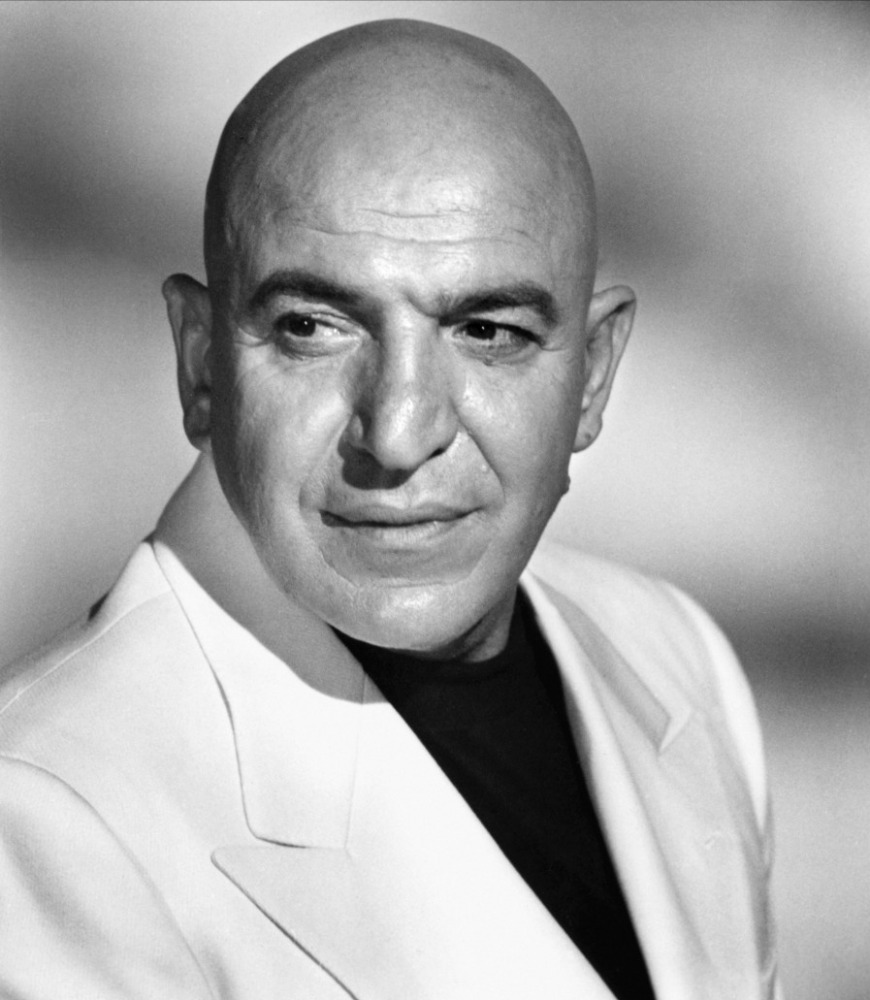 Okay, now that I have the obligatory introduction to any mention of the character Kojak, I can talk about this action figure that I picked up earlier this year. That’s right!  There’s a Kojak action figure! 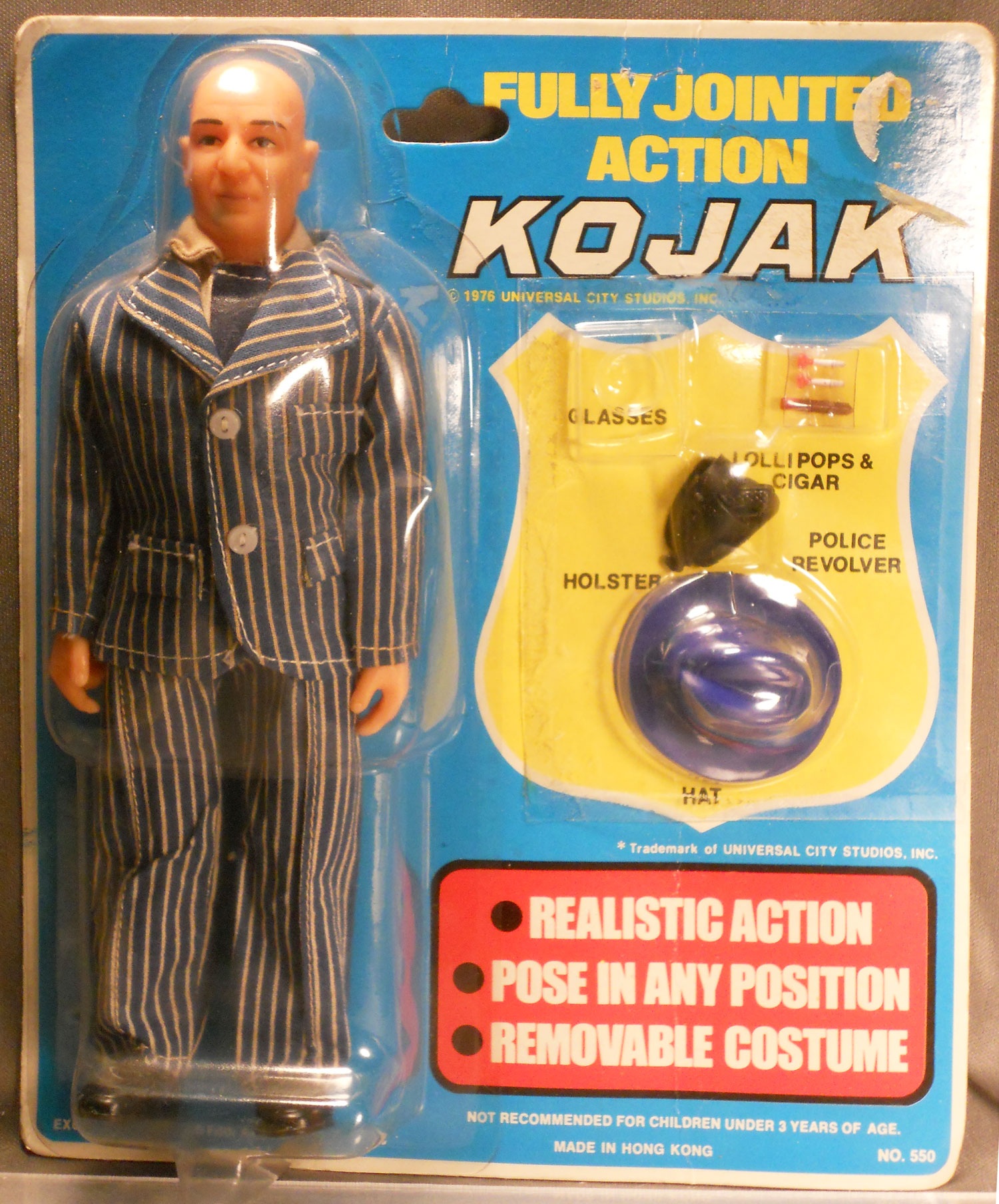 I’m always sort of relieved I grew up in the 1980s, because the action figures of the 1970s left a little something to be desired, at least in the United States. Beyond Mego’s superheroes and Micronauts and Kenner’s Star Wars, action figures of the 1970s were a little more grounded in reality than the robots, demons, barbarians, sorcerers, and other strange denizens that made up my toy collection in the following decades. As such, many action figure lines drew their inspiration from the heroes that kids were familiar with on television.

Mego certainly capitalized on the vast majority of available TV licenses. They produced everything from Planet of the Apes to Star Trek to Starsky and Hutch to even One Million B.C., and they were all produced in the same 8-inch scale, meaning that they could all interact with one another.

Excel Toy Corporation must have been desperate to steal a little bit of success away from Mego. In the early 1970s, the company was responsible for two different toy lines based on historical characters that were in a slightly larger 9-1/2-inch scale. In their Legends of the West line, they made figures of Annie Oakley, Buffalo Bill Cody, and Jesse James, among others. In their Military Legends line, they covered everyone from George Washington all the way to General Dwight Eisenhower and even Admiral William Halsey, Jr. Hey, it was all public domain, so I guess they took whoever their toy sculptors could churn out.

However, producing a Kojak action figure was a bit of a departure. It was in an 8-inch scale, just like the Mego figures, so Telly Savalas could fight General Ursus or the Gorn or any number of other Mego figures and not look out of place…well, in terms of scale at least. Kojak was on television before I was born, but growing up in a household of retro sensibilities, I know enough about the show to know he was tough but loveable cop. Cops are the good guys, cops carry guns…good enough for an action figure, I suppose! 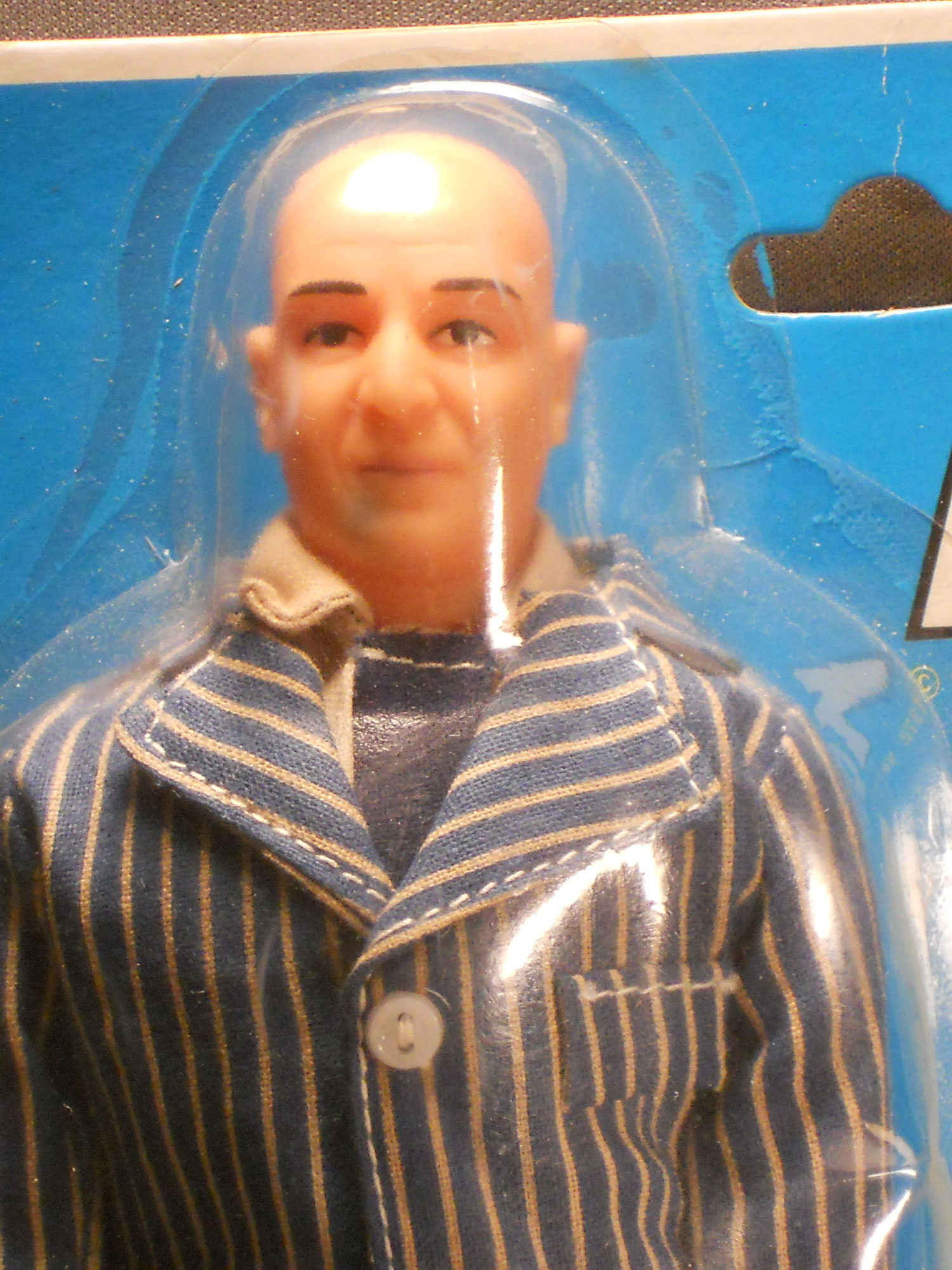 Collectible toys have come a long way in terms of sculpting, but even in the 1970s, especially with Mego, you could tell what actor the sculptor was going for in most cases. Other than being bald, I think it’s safe to say Kojak looks absolutely nothing like Telly Savalas. Then again, I don’t think there were many bald action figures in 1976. In that regard, I guess you could say Excel Toy Corporation was a pioneer!

Speaking of 1976, by that point, Kojak had been on the air for about three seasons. I think that’s a smart move. Many times these days, when action figures are designed to promote a particular television show or movie, the rights are often snapped up before their popularity has been proven. This is why toys from last year’s “Green Lantern” movie are still warming pegs even after deep, deep discounts. By 1976, Kojak’s popularity had been proven, so even if the toy looked nothing like the actor, at least name recognition carried a lot of weight by that point.

Normally, I don’t gravitate toward items that were made before I was born, since I don’t have that childhood attachment to them like I do with stuff made post-1983, but I thought this figure was too cool to pass up when I saw it for sale at a toy show in Maryland in January. It was marked $50, which I didn’t think was a bad price considering it was still on the card, but the bargain hunter in me needed to be sated that day, and so I got the price knocked down to $40 without too much trouble.

The card is a little rough, and I’m certainly not a fan of that weird blue spot on his face, but otherwise, I’d say it’s in decent shape. Here’s the thing: I cannot possibly imagine trying to find a loose complete example. 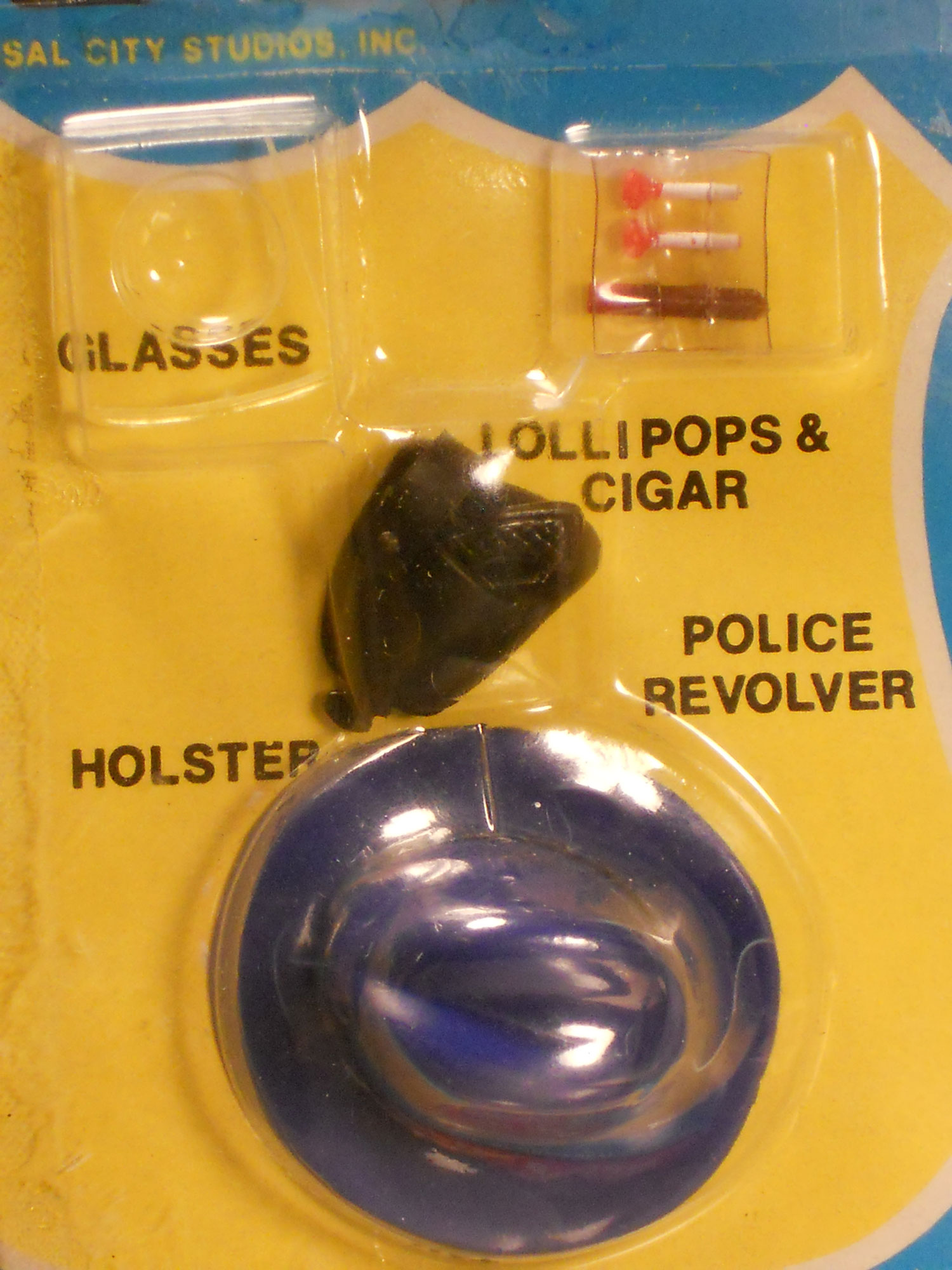 Finding one in nice shape with the outfit intact with his hat and gun? That’s probably not too difficult a task. Finding one with the lollipops and the glasses, which were so small and clear that I spent several minutes figuring out if they were still in the package? Yeah, that’s going to prove a challenge. However, I have to give Excel credit for including these small but key accessories. In lieu of not being able to smoke on television after 1971, Kojak sucking on lollipops became one of the most memorable images of 1970s television. 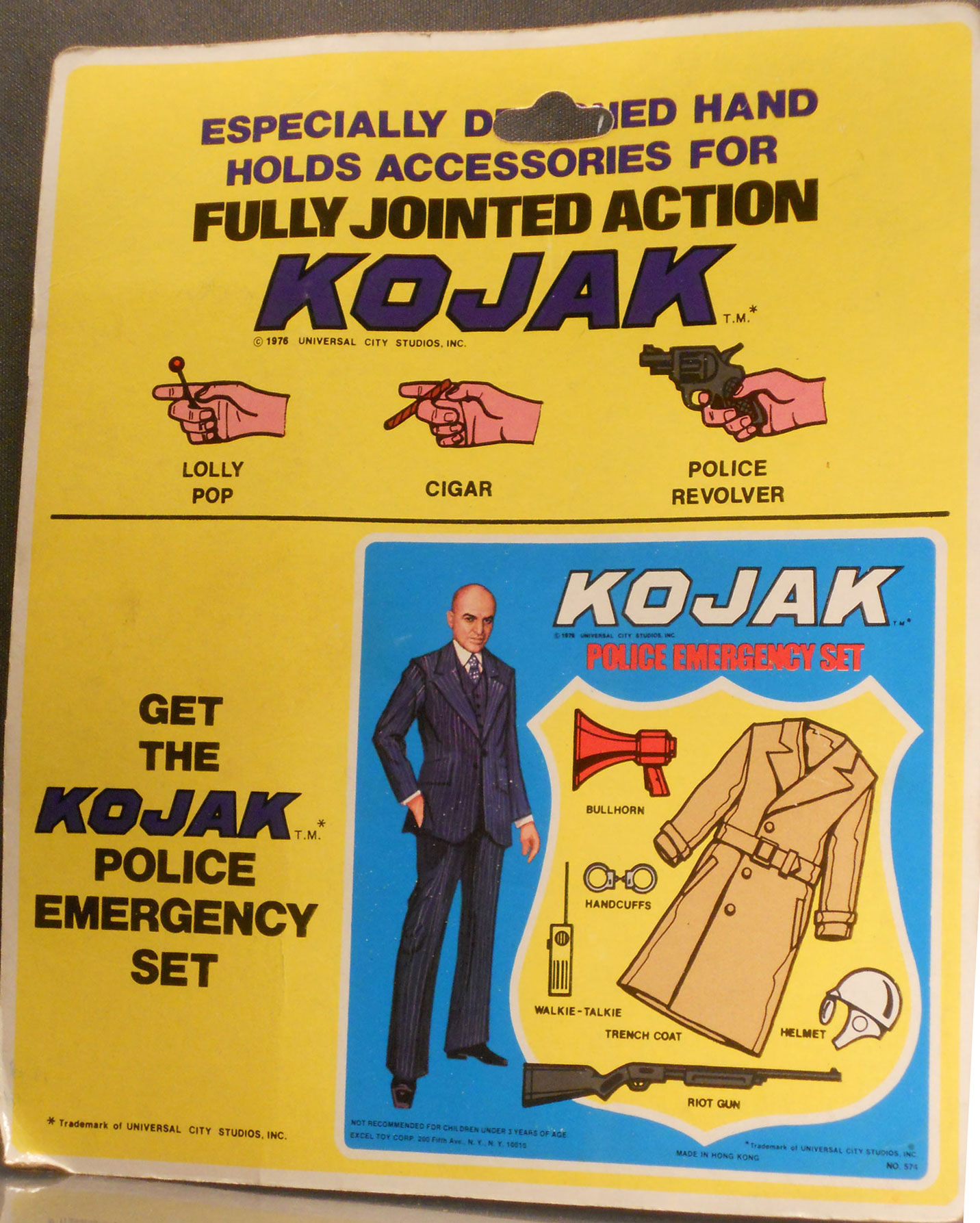 What I love about this piece is that it’s sort of a one-and-done line. If I wanted to go crazy, I’d try and track down Kojak in his blue outfit instead of this pinstripe number here, along with his trench coat and accessory set, and if I was really insane, I’d look for the mail-away police headquarters set complete with “bad guy” action figure (I’m not kidding, that’s what they called the only other figure they made for this line), but I won’t. I don’t need an entire collection to let people who see my collection know that indeed they made a Kojak action figure. It’s ridiculous and fun in its own way, which makes it stand out, and if it achieves those things, I’m going to want to own it at some point.

BONUS: USELESS TRIVIA! When you collect the kinds of things that I do, you end up learning way too much about pop culture. So here are two utterly useless facts that you’ll never get asked at pub trivia:

1.)    DID YOU KNOW that Telly Savalas has a connection to the 1980s toy line Go-Bots? He provided the voice of the villain Magmar in the 1986 Go-Bots movie “Go-Bots: War of the Rock Lords.” By that logic, there are technically two Telly Savalas action figures. I’d say the Kojak figure looks slightly more like Savalas than the Rock Lords Magmar figure, but only VERY slightly. 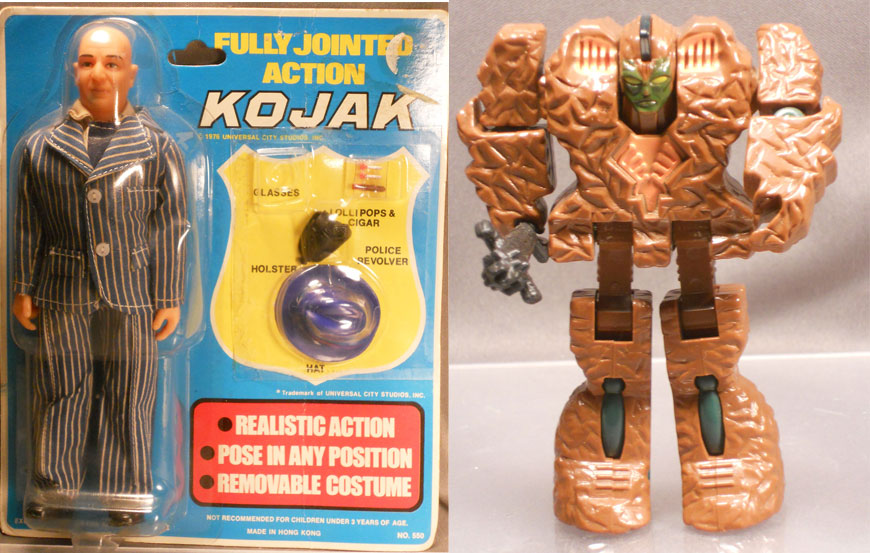 2.)    DID YOU KNOW that in 2005, the USA network rebooted Kojak and cast Ving Rhames as the title character? Not surprisingly, it lasted one season. I know Hollywood is completely out of original ideas, but I don’t know what it’s going to take to get them to stop rebooting TV shows from the 1960s or 1970s. Or if you’re going to do it, do something crazy like reboot “Man From Atlantis.” 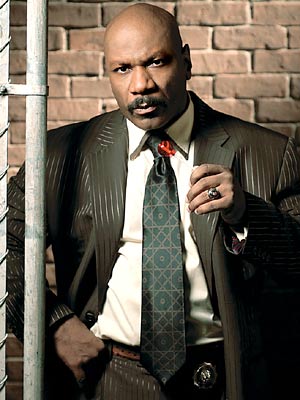 This entry was posted in 1970's, Action Figures, Ben, Toys. Bookmark the permalink.