I don’t know if Happy Meals are as big a deal as they were in the 1980s, when parents were blissfully unaware that all that fast food was putting their children at risk for obesity and type II diabetes. Honestly, though, I was never in it for the food. For me, Happy Meals were all about the toys, and I think I’ve established in my nearly two years writing for this site that I was (and still am) very obsessed with my toys.

It seems as though every Happy Meal toy is a promotional tool used to get children to beg their parents to see the latest computer animated theatrical release or buy them the latest Mattel ™ toys. However, it wasn’t always like this. McDonald’s use to come up with their own ideas all the time so that kids would be sold on their love for Ronald McDonald and his friends at an early age.

The best promotion by far had nothing to do with Ronald and the gang. Instead, it had to do with transforming things, which was an inevitable recipe for success for toys in the 1980s. McDonald’s released Changeables, a series of robots disguised as your favorite McDonald’s meals. Sure, like all Happy Meal toys, they weren’t QUITE as good as their expensive, branded counterparts, but for FREE toys, they were amazing. We hadn’t seen anything quite like them. A hot cakes box and a French fry container transforming into robots? 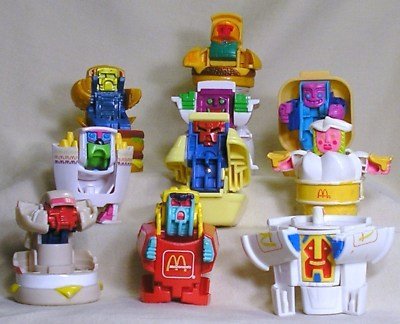 Who would have thought that you could have food containers transforming into awesome robots?

The Japanese. That’s who. 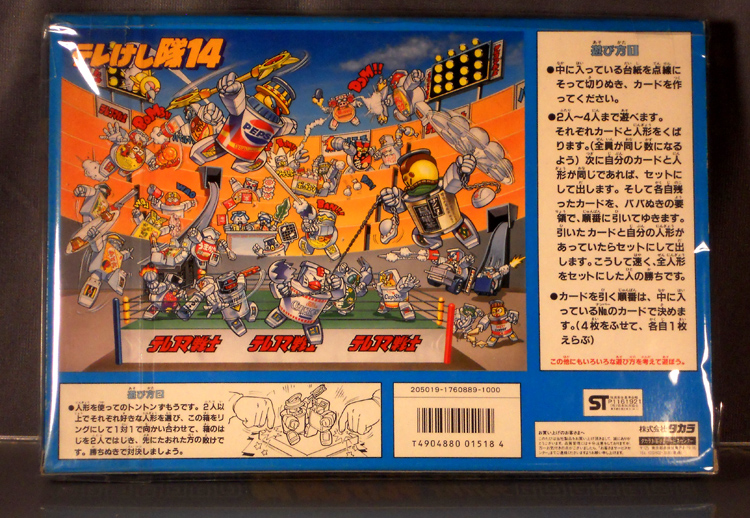 This amazing artwork let's you know about the eternal food war going on in Japanese supermarkets.

These toys, affectionately known by American collectors as “Canned Food Fighters,” take containers of popular branded foods and meals in Japan and turn them into an army of food fightin’ warriors! Unlike Food Fighters, which definitely took their inspiration from the American military, Telecoma figures were more akin to Kinnikuman or M.U.S.C.L.E., where a wide variety of characters settled their differences in a stadium for mealtime dominance!

What I love about the toys is that they actually use real food products on their labels. When McDonald’s made Changeables, they didn’t have to worry about licensing their own food. With Telecoma, this was more like Computer Warriors using a Pepsi can in their toy line or Monster in my Pocket featuring Tony the Tiger, except on a much grander scale. The Pepsi can is certainly the most recognizable design for us Americans.

While most of what I write about it something that I know quite a bit about and feel the need to get the info out on the Internet, I can’t say that I know a whole lot about Telecoma other than they exist. My collection is rather small, and all of it has come courtesy of a series of Japanese online auctions. I learned about the line through the Little Rubber Guys message board and decided I would see what was out there. 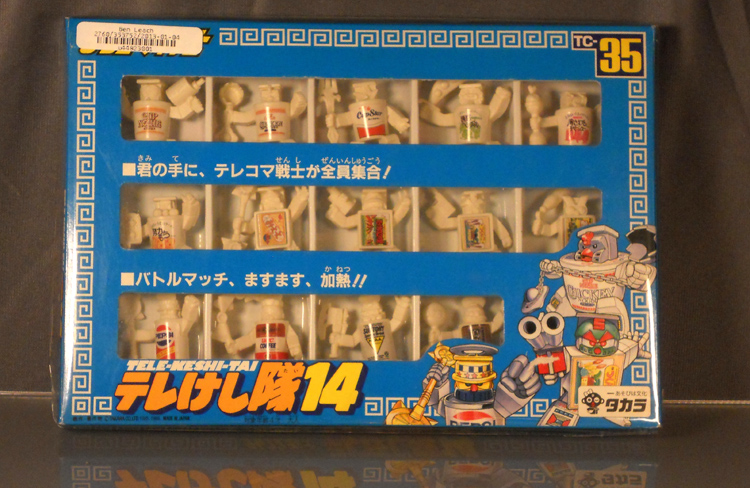 These characters all resemble cans... 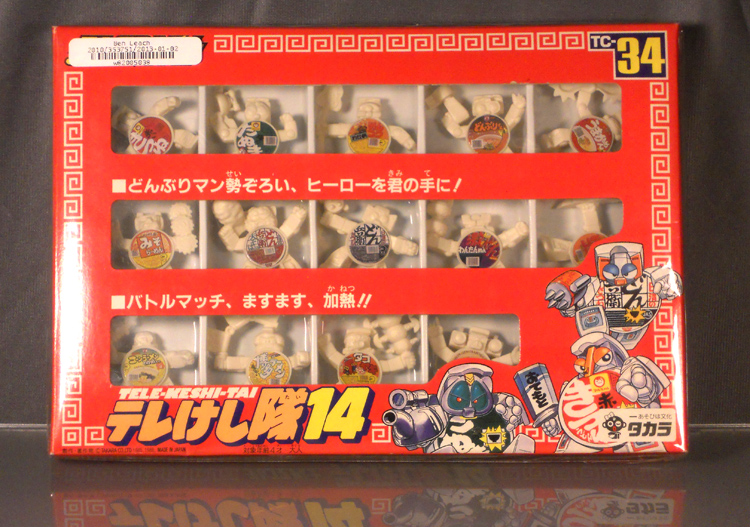 ...and these are more bowl-based characters.

Two of the sets that I have fall into the “keshi” or little rubber guy category. I’m guessing one boxed set is one faction and the other contains the guys they fight with or something. They are packaged very similarly to most kinkeshi lines of the era. I don’t know if these two boxed sets represent a complete set of figures or not, but it must put me pretty darned close. 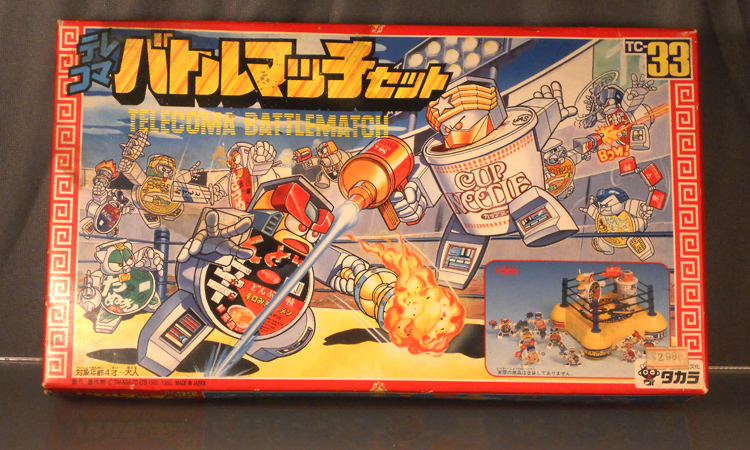 The third boxed set I own is a deluxe set of sorts. In addition to containing a handful of the kinkeshi figures, it also contains two of the transforming figures that are very similar to the way McDonald’s constructed its Changeables line. 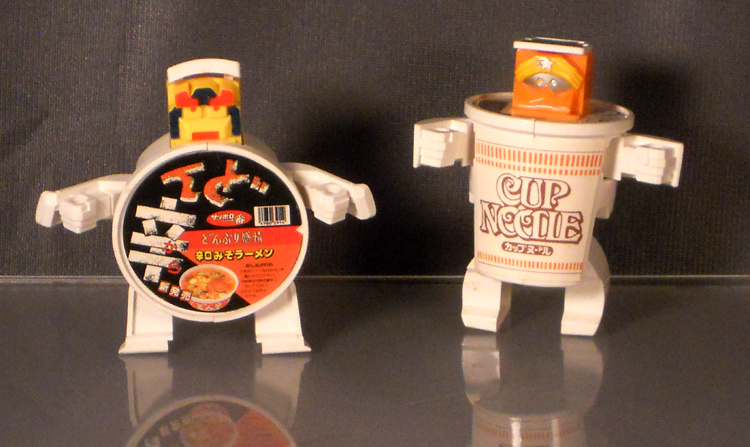 These figures came in the above boxed set.

Now, some of you might say, “Wait a second, Ben, I’m pretty sure I had these figures as a kid, and I never lived in Japan!” And you know what? You’re absolutely right. 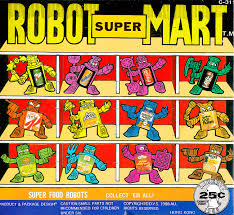 Though I own one of these, this image comes from dinosaurdracula.com!

This is a card that would have been placed in a grocery store vending machine. As you can plainly see, the designs of these characters come right from Telecoma. Several collectors have documented finding these figures in a wide variety of colors, and a few of them have found examples with the stickers still attached, which feature more recognizable American food brands on them. Sadly, I have not stumbled upon any examples of Telecoma knock-offs at any flea markets in the couple of years that I’ve been on the lookout for them, but they are definitely out there.

While Telecoma has a much richer universe than the McDonald’s Changeables, it’s funny to see how East and West developed what is essentially the same idea. Throw in Food Fighters to the mix, and there’s no question that kids will never get tired of playing with their food.