FIND OF THE WEEK: Naughty Bisque Turtle Girl With Her Bear Bottom Showing

One lesson Jim and I have learned over the years is that “finds” pop up all the time, so you have to be constantly vigilant. Obviously, the closer you are to the original source, the more likely you are to score a find. That’s why yard sales are so addictive. You can travel around all over the place wasting precious time and gas and come up dry…

…or you can travel about a mile or so from home and find something fantastic for about a dollar. 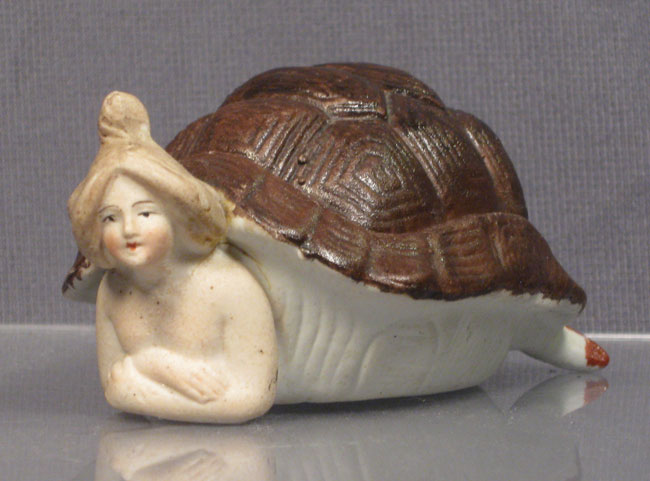 Very early in our collecting career, nearly forty years ago, we went to a local auction and paid four dollars for a lot of four bisque bathing beauties that were made in Germany. They were delicate and well-detailed – and three of the four were naked! Even at that time, four dollars was a steal. This purchase made us notice other bisque bathing beauties and naughty bisque figurines when we went to shows and antique shops, and over the years we saw prices steadily rise from about $25 to $100 and more. Some larger figurines were often priced at over $200. In fact, several years ago when “The Antiques Roadshow” was in Atlantic City, they did a special segment on bisque bathing beauties, so they are quite desirable and collectible.

We have always thought the turtle shell naughty figurines are especially intriguing. How bizarre they are! There’s the pretty Victorian girl’s head sticking out of the rather large tortoise shell. You lift off the back of the shell and – voila! – there’s the rest of the girl. Oftentimes the girl’s undies are showing. Sometimes even her bare bottom is showing! Or, as in the case of this figurine, her “bear” bottom is showing. We are pretty sure that this is the rarest version of this figurine.

I’m sure a figurine like this was purchased in a novelty store, most likely in the big city or at a summer amusement area such as Atlantic City or Coney Island back around 1905 or 1910. It probably cost a dime or maybe a whole quarter. Can’t you just picture a dirty old man or a randy young man calling over a friend, showing him the suggestive young lady with the shell on her back, and then offering to show him her “bare” behind? Imagine the laughs – and the disappointment – when he saw a teddy bear tucked between her legs. (Keep in mind that the teddy bear craze was in full swing during the first decade of the 20th century thanks to President Teddy Roosevelt.)

This very desirable bisque naughty turned up in a miscellaneous box of figurines at a yard sale about a week ago. I would have gladly paid more, but I was quite happy to part with a dollar for her.

Finds like this are what make yard sales so much fun.

This entry was posted in 1900's, Americana, Carol, Humor, Weird. Bookmark the permalink.

10 Responses to FIND OF THE WEEK: Naughty Bisque Turtle Girl With Her Bear Bottom Showing