Over the years, I’ve been able to add a few animation cels to my collection. I find them fascinating just because, to me, they are far more than just artwork. These cels are literally what brought a cartoon to life. There were no sets, no props. Actors provided voices, but it’s not as though they were in costume while in the recording studio, and in many cases, their voices are recorded separately from other actors who might be featured in the same cartoon. So each cel was responsible for bringing all of those elements together in one piece of art. Without them, we wouldn’t have the cartoons of our youth and all the cherished memories we have with them. Plus, everything seems to be done with computers now, so traditional animation also speaks to a bygone era.

Animation cels are some of the best bargains on eBay. Back in the 1980s and 1990s, if you wanted to collect animation cels, chances are you’d have to go to an art gallery. I remember most cels, even for television series no one cared about, would routinely cost hundreds of dollars. However, for every cartoon ever produced, thousands of cels were created, so it stands to reason that there are an awful lot of them out there. I’ve seen sellers list hundreds of cels from different cartoons, with auctions starting at $9.99 each. The best cels with key characters in dynamic poses with their original painted backgrounds always bring more, but you can get your fair share of bargains online.

However, not all shows have cels that are easy to find. While cels from certain 1980s cartoons produced by Filmation are quite easy to find, cels produced by other production companies like Sunbow and Rankin-Bass are not nearly as plentiful, at least not on the secondary market.

That’s why, back when I was actively collecting Silverhawks toys back in the early 2000s, I was surprised to see a batch of them show up. More importantly, though, they had exactly the cel I wanted. 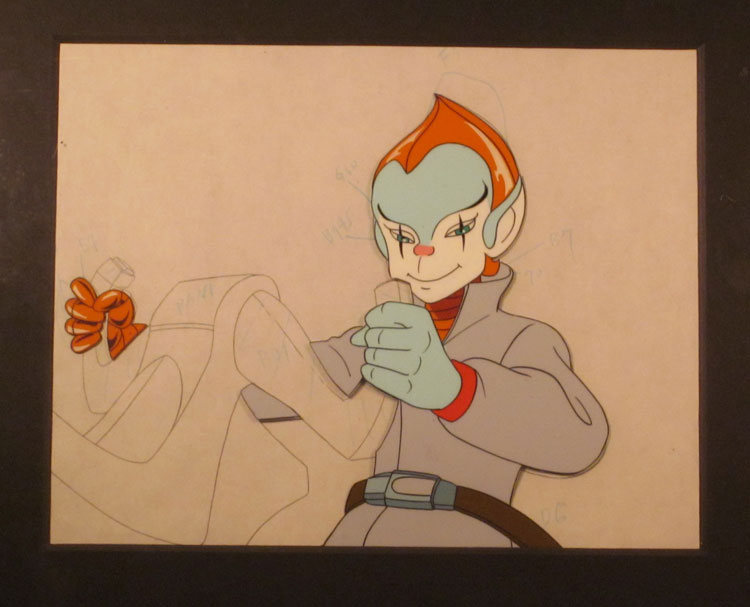 This is Copper Kidd, an alien from the planet of mimes, and he’s easily one of the stranger protagonists to appear on an action-packed cartoon from the 1980s. Since he didn’t talk, he communicated through a series of whistles. I don’t want to bash my favorite character from this ridiculous show, but the whole thing about mimes is that they communicate through body movement, not through any kind of speech. I know the creators of Silverhawks probably didn’t have the Internet for research in the mid-1980s, but I’m pretty sure there was a proper description of a mime in Encyclopedia Britannica.

Anyway, Silverhawks was on at a time when every cartoon had to have some sort of educational message at the end of it. The most well-known examples are most likely the public service announcements that were shown at the end of G.I.Joe: A Real American Hero, where your favorite cartoon characters advised children to stay away from strangers, put out fires, call 9-1-1, and all that fun stuff. Silverhawks was different in that the show tried to be educational by including a brief astronomy lesson. The cowboy Silverhawk Bluegrass would teach Copper Kidd about space so that he could be trained as a backup pilot for the Silverhawks’ ship the Maraj, which did happen on occasion.

This cel is one of the cels used specifically in that context. Since they often used the same animation for Copper Kidd from lesson to lesson, it’s very possible this cel was seen during the majority of these lessons, which, to me, makes it a lot cooler than an episode-specific cel. Anyone whose seen even one episode of Silverhawks has probably seen this cel.

I think I paid around $50-ish dollars for it on eBay back in the day. The framing, of course, cost a little bit extra, but I certainly love having it on display.

This entry was posted in 1980's, Animation, Art, Ben, Toys. Bookmark the permalink.