Let’s face it, if you’re looking for a toy that you can change from one thing and make it resemble something else entirely, sand is pretty much the ultimate Transformer.

Though sand sculptures may have their origins as far back as ancient Egyptian times, the first documented sand sculptures were done in the late 19th century in Atlantic City, New Jersey (yet another reason to be envious of my home state). It seems as though kids must have taken to liking the hobby at some point in the early 20th century, since there is a market for vintage sand buckets, and while tin lithography buckets are out there, I’ve also seen other examples that are clearly from the 1920s or earlier, like this one that recently appeared on eBay. 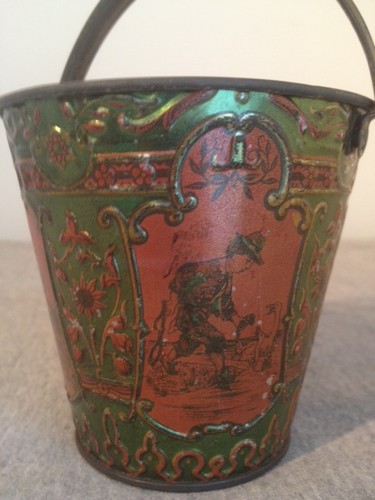 Think about it, though. Once you get to the beach, you have a virtually unlimited supply of sand at your disposal, and all you need to play with it is a little imagination, just like any toy. Sure, you can’t take it home with you at the end of the day (unless you’re playing in a sandbox in your backyard, but even then, I doubt your parents would let you take your creation inside the house). But with a few tools, you can create pretty much anything you want out of finely compacted granules of silica.

However, let’s say you’re an executive at a toy company in the 1980s. You’re looking to corner every market imaginable. Sure, kids are buying your action figures, and between a cartoon, party supplies, board games, coloring books, radios, stickers, and every product in between, you’ve got virtually every desirable kid-based market covered…except the kids at the beach playing with all that free sand. How do you reach them?

You do it by creating the coolest set of sand building toys in existence. 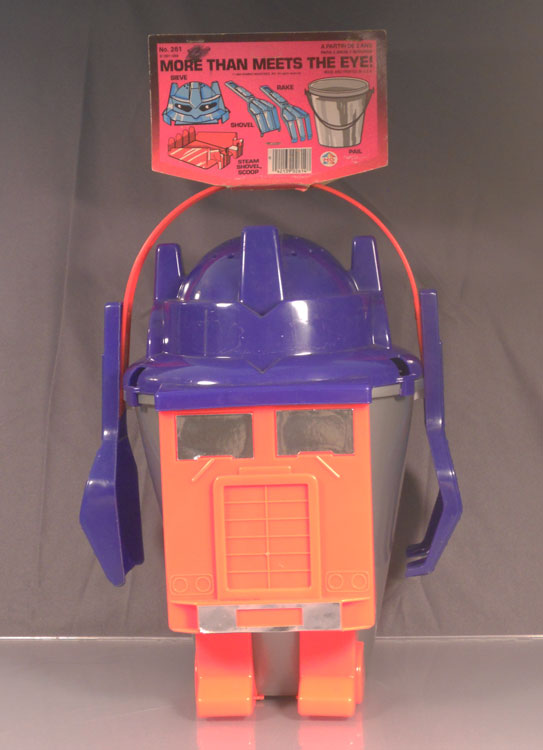 Behold the Transformers 6-in-1 Sandbot! This toy was made in 1984 at the height of the launch of the Transformers brand by HG Toys, a company that would scoop up popular licenses (or licenses they THOUGHT would be popular) and use the images of characters to create more basic toys like puzzles and games and role play items. In other words, Hasbro had the master license to produce the action figures, but HG Toys could produce virtually anything else that featured Transformers characters. While getting off to a slow start with fairly basic toys in the 1970s, by the 1980s, they were crafting more interesting, exclusive designs based on popular properties. For example, check out the wide array of Masters of the Universe products they created here, including role play sets with light-up swords and an inflatable ride-on Battle Cat!

Sandbot is obviously based on Optimus Prime, even if they don’t come out and say it on the package. From the front end of a Kenworth K100 cab truck to the design of the character’s helmet to the color scheme, there’s no question which character inspired this toy. However, they did a rather ingenious thing by taking sand building toys, which, let’s face it, haven’t really changed a bit in several decades and use them to create a functional looking character. Sandbot breaks into 5 components: 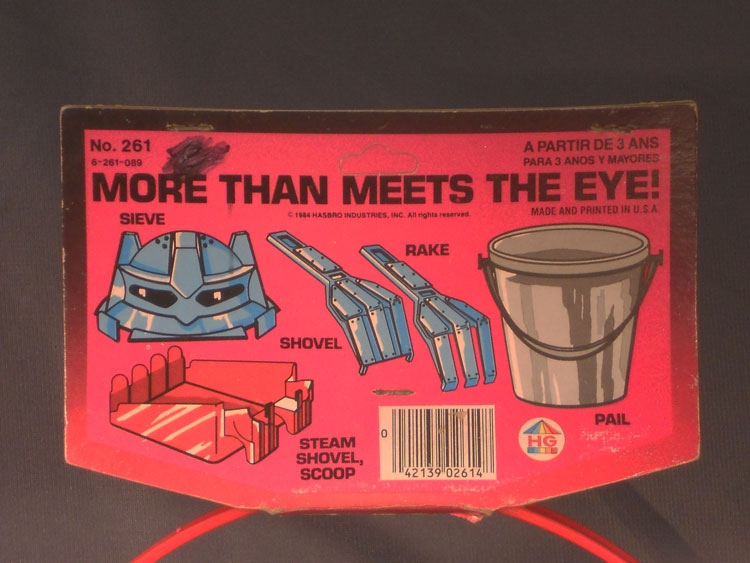 So why is it called 6-in-1 Sandbot if it breaks down into five sand toys? That’s because whenever you’re finished playing in the sand with its constituent components, you can put everything back together and play with Sandbot itself! It’s a rather clever way of getting your kid to take a Transformer to the beach. Also, here’s a riddle for you hard core Transfans: Does this make Sandbot the very first Transformers combiner, since it was released prior to Devastator? WHOA. Blew your mind, didn’t I? Perhaps there is more to Sandbot than meets the eye. Yup. I mentioned the tag line required in every story about Transformers ever written.

There isn’t much more to say about Sandbot other than it’s an incredibly creative way of taking a series of toys that haven’t really benefitted from any new ideas for decades (sand building toys) and found a way to not only incorporate a popular character but make it their own. Truly, this is something that every Transformers fan needs to own, even if it’s not necessarily canonical to Generation One. 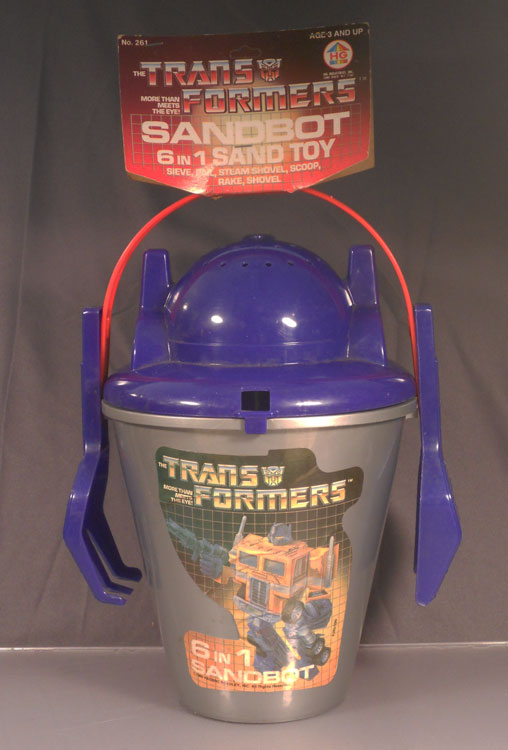 I bought this without much hesitation at a small toy show held in Maryland. Unfortunately, it’s missing the yellow stickers that made the “eyes” on the “helmet” portion of Sandbot. However, all of the contents are here, and the original cardboard sleeve around the handle is still intact, so this is an unused example. Sand toys are notoriously mistreated, so this was probably the only way I was going to pull off a complete example. I paid $15 for it at the toy show, and I didn’t hesitate for a moment in that price. It went from something that I knew existed but wasn’t on my radar all that much to becoming one of my favorite finds so far of 2012.