In preparing for this article, I’ve spent 28 years of my life being a giant nerd. I also looked through our website searching for the term “crossover collectible,” and since I haven’t seen it yet, now is as good a time as any to bring it up.

A crossover collectible is one item that appeals to multiple groups of collectors. Let’s take a rather general example from my world of geekdom: Star Wars. There are people who collect nothing but Star Wars items. However, there are so many Star Wars items that have been produced since 1977 that if you collect just about anything, chances are that there’s a version of it featuring Darth Vader’s likeness…or one of the thousands of other major, minor, and off-screen characters that populate a galaxy far, far away. Do you collect nutcrackers? There’s a Darth Vader version. Do you collect vintage cake pans? They made a whole Star Wars series. How about Christmas ornaments? Hallmark has produced dozens since 1995. What about something oddly specific like vintage scotch tape dispensers? Sigma made a very strange one featuring C-3PO in the 1980s.

Now, what happens when you have a crossover collectible is that you end up having two different groups of collectors fighting to add the same item to their collection. This usually means that a.) there are less to go around because more people than just one specific collector group wants to own them, which ends up leading to the fact that b.) they tend to be more valuable as a result.

With that discussion out of the way, I present to you a crossover collectible that I didn’t even know existed until earlier this year. This is something that not only action figure and 1980s toy collectors would love to own, but anyone who collects video game-related merchandise would love to own these as well.

For the last couple of years, I’ve been collecting a toy line called Spinjas. Ah, the 1980s, when ninjas were so commonplace in our pop culture landscape that you could even find them on a series of spinning tops. Spinjas were made by Tomy and distributed in the United States by Parker Brothers, the board game company responsible for Monopoly among several other classic games. The core concept was that you would take your little Spinja, stick it into a launcher, and your friend/enemy would do the same. You would ideally launch at the same time on some kind of flat surface, and whichever Spinja was left standing was declared the winner…like every other spinning top game ever made in the history of humanity. 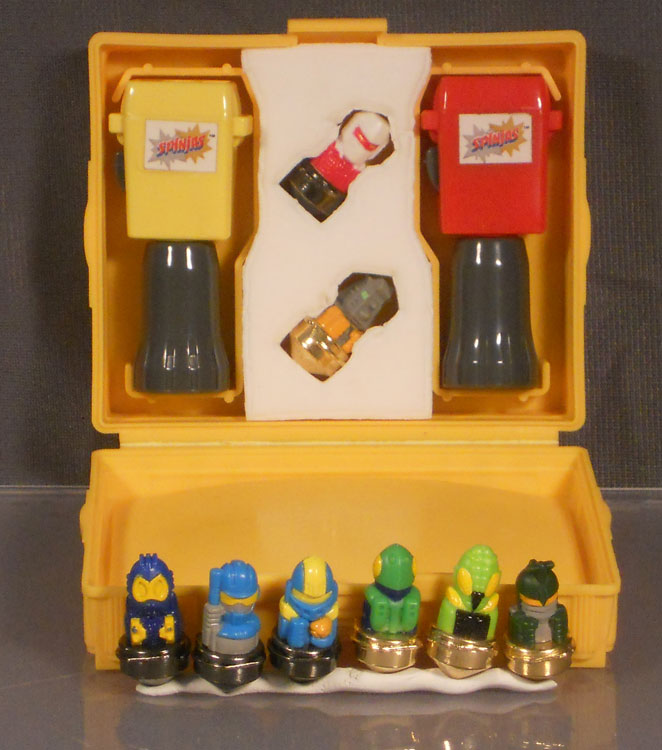 What separated Spinjas though was an attempt at making them more like action figures. You had the Eliminators, the good guys with silver/steel tips, and they were pitted against the Dread Force, the bad guys with gold/brass tips. The Eliminators were populated with knights, a pilot, and sports playing robots, while some of the members of the Dread Force resembled reptiles or insects. There was no corresponding TV show or comic book, unless you count the two-page advertisement created to attempt to explain the world of Spinjas. Someone on Wikipedia has claimed that some of these Spinjas serve as spies, although without any sort of reference to anything, I’m not sure I believe it, as it could be some sort of weird Spinjas fan fiction I don’t know about (and given the obsessive nature of toy geeks – myself included – I wouldn’t rule out that possibility). However, I don’t own any packaged examples that may have detailed the intricate relationships between tiny spinning ninjas, so anything is possible.

What has always fascinated me is that these toys obviously have their roots in Japan, and yet no one seems to know what they were called in Japan or if more than the 24 that were released in the United States exist. In Europe, they were released as Tomy Battlers, and aside from packaging, the only difference is that the launchers indicated that they are Tomy Battlers instead of Spinjas. They are still the same toys otherwise.

However, I always wondered if more could have existed. After all, small toys like this were often created in large quantities. If you look at toy lines featuring small figures from around the same time (M.U.S.C.L.E., Battle Beasts, Monster in my Pocket), those series featured dozens or even hundreds of different figures to collect. I had heard rumblings of a series of World Wrestling Entertainment (WWE)-inspired Spinjas that were released in Australia within the last five years or so, although no pictures seem to exist anywhere. However, I recently stumbled upon a much older crossover property involving Spinjas that I was much more excited to find. 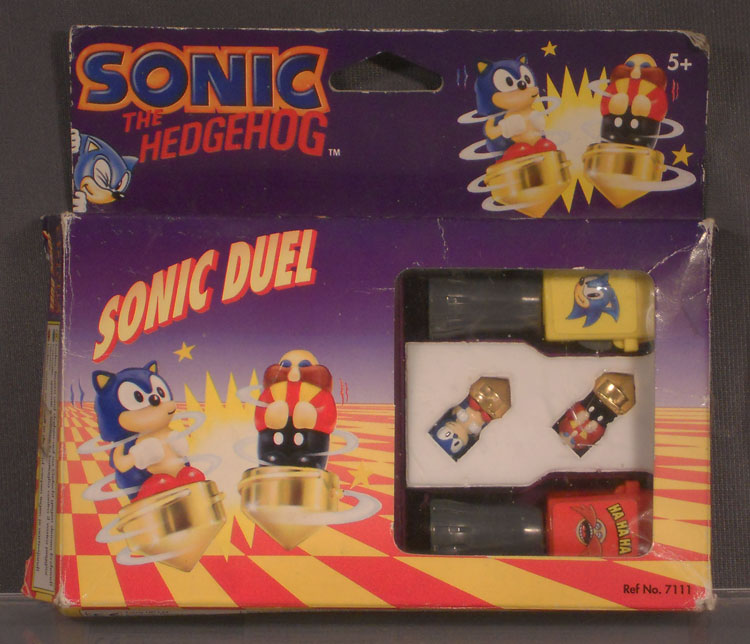 Nowhere on the package of the Sonic the Hedgehog Sonic Duel does it say the word “Spinjas,” yet there is no denying that this is a natural extension of the 1980s toy line. Released in the early 1990s in Europe, this set features just two figures: Sonic the Hedgehog and Dr. Robotnik. Just like Spinjas, Tomy is the company responsible here, which makes perfect sense. Tomy made a whole series of toys for Sonic the Hedgehog when the Sega mascot first achieved worldwide popularity. It was also commonplace in the 1980s and 1990s to reuse molds as much as possible to create entirely “new” toys as a way to keep getting merchandise on the shelves (a practice that still exists today in the toy world). 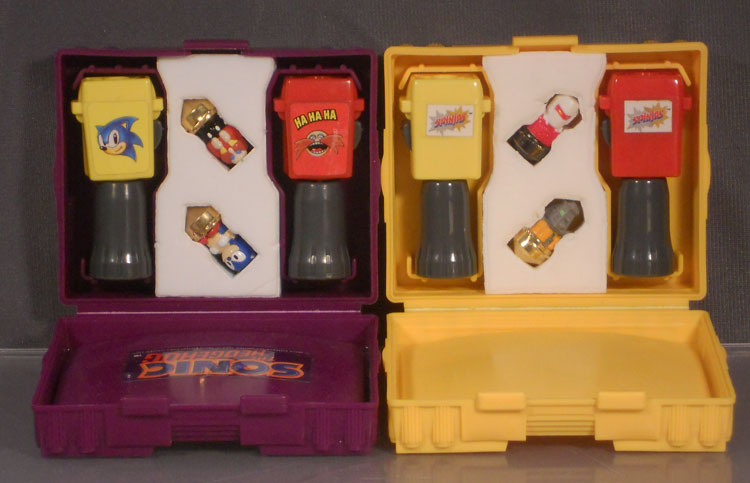 As you can see, this isn’t something that is meant to sort of resemble the Spinjas line. These are essentially Sonic the Hedgehog Spinjas, with the only differences being the sculpts of the “figures” on the tops, the colors, and the stickers on the two launchers. I know it’s not fair to call this set an official part of the Spinjas line, but I think it’s safe to say that if you’re trying to collect anything and everything related to Spinjas, you’d have to include this in your collection.

It’s bad enough that finding Spinjas at all proves very difficult for most collectors, but finding this set proved especially challenging. First of all, since the title Spinjas does not appear on the package at all, anyone looking for Spinjas on eBay or through Google isn’t necessarily going to find this set. Likewise, many video game collectors tend to focus solely on video game related merchandise, and if they do collect action figures, they tend to only focus on ones related to video games. Hence, hard core video game memorabilia nuts might not be in touch with action figure collectors who would love to have a set like this. Finally, this does not appear to be a toy that was released in the United States at all, despite Sonic the Hedgehog’s global popularity. This was a missed opportunity, because in the U.S., we really didn’t get much of any kind of Sonic merchandise in the character’s hey day in the early 1990s. 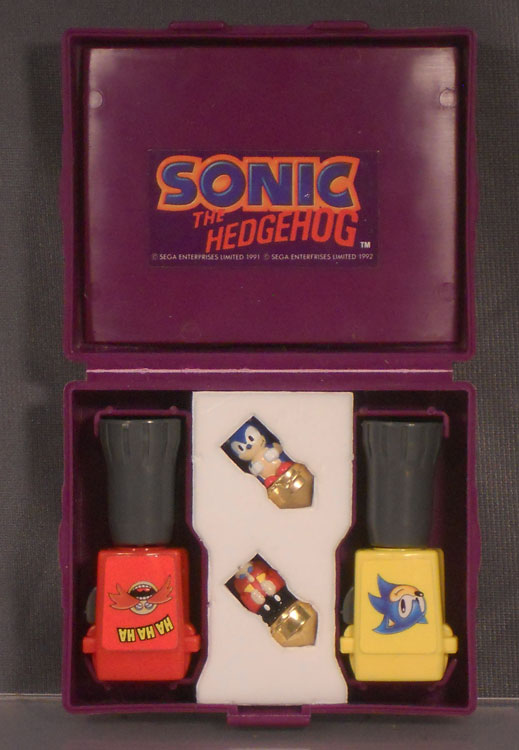 13 Responses to Sonic the Hedgehog Spinjas