Feature Matches: These Matches Should Be Featured in Anyone’s Collection

I’m not a matchbook collector, per se, but if I were a phillumenist, I’d definitely collect Feature Matches.  When it comes to little scraps of advertising ephemera, these clever and colorful matchbooks with pictures on the actual matches are matchless!

In this wacky world of collecting that we inhabit, it’s almost impossible to go through a flea market without encountering some vintage matchbooks for sale, and they’re usually affordably priced, often a dollar or less.  Always drawn to advertising of any sort, I will usually glance at the matchbooks.  However, it was only about three years ago that my eyes were really opened to a particular type of matchbook, the Feature Match.

In the United States, “Feature” was a trademarked name for the matchbooks containing wide match sticks that were printed with lettering and/or designs.  The trademark was held by the Lion Match Company of Chicago, Illinois, and, indeed, every Feature matchbook I look at has that company’s name on it.

According to my research, Feature matches were introduced in September 1930.  Although I can’t find any definitive confirmation of my theory, I suspect that the first Feature matchbooks were oversized.  For instance, this Giant Feature Match Book for GE has several patent dates printed behind the row of matches.  The earliest one is 1, 733, 258, which correlates to the patent being issued in 1929.  The last patent on it is 1, 839,846, which would have been issued early in 1932.  The matchbook measures approximately 3 ¼ by 4 ½. 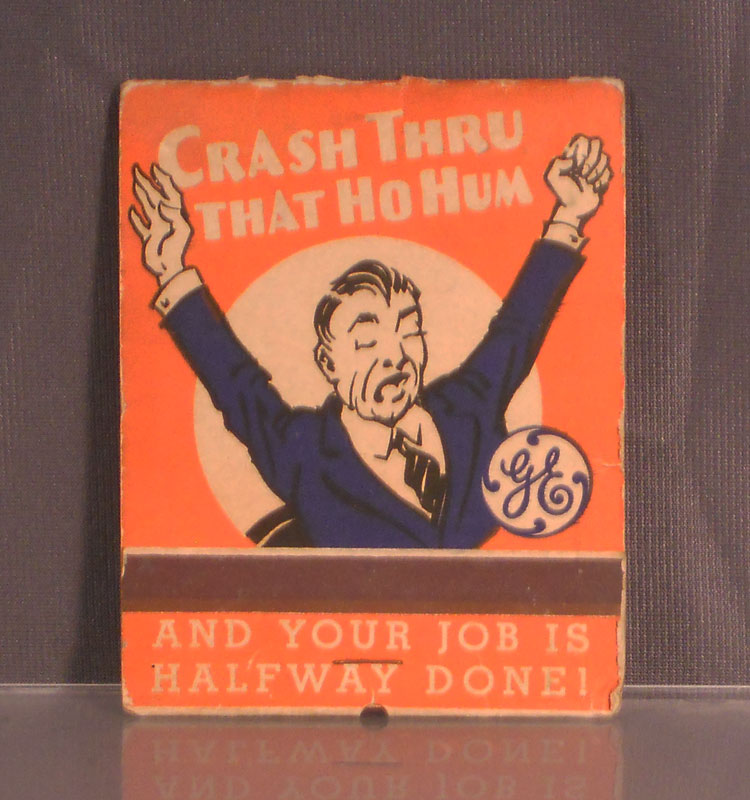 Here’s another great Giant Feature Match Book that is actually dated June 18, 1936.  It promotes the fight between Joe Louis and Max Schmeling being broadcast on NBC Radio and sponsored by Buick.  Above the row of matches depicting a man peeking through a knothole in the fence are the words, “Ladies and Gentlemen – THE WINNAH!” What he sees behind the fence is a 1936 Buick.  This is a great example of a crossover collectible.  It appeals to collectors of sports memorabilia, radio memorabilia, automotive memorabilia, and, yes, matchbooks.  As you can imagine, it’s worth more than the average Feature matchbook, most of which seem to be priced between $5 and $20. 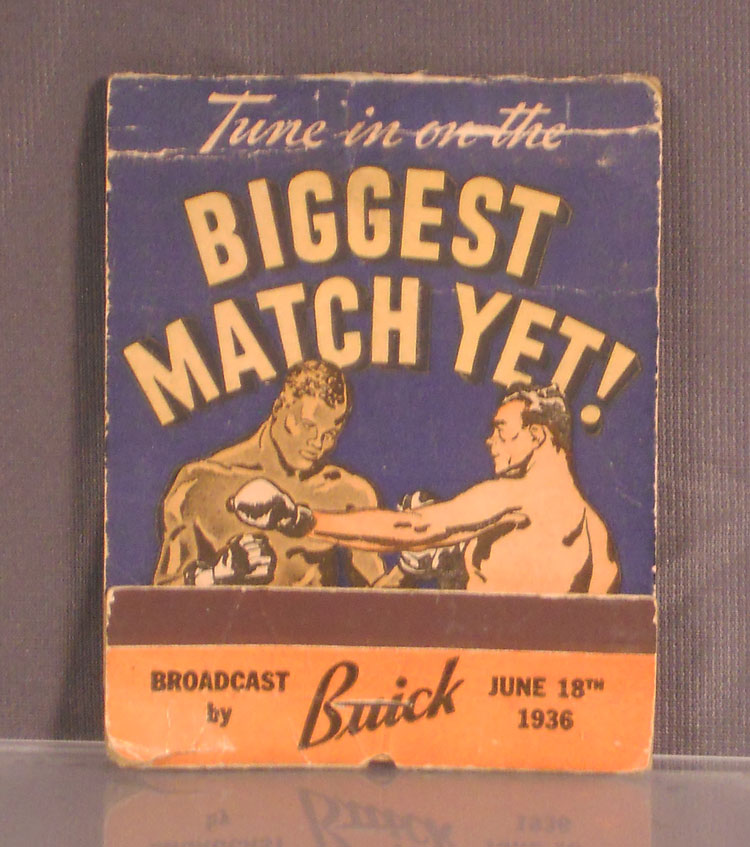 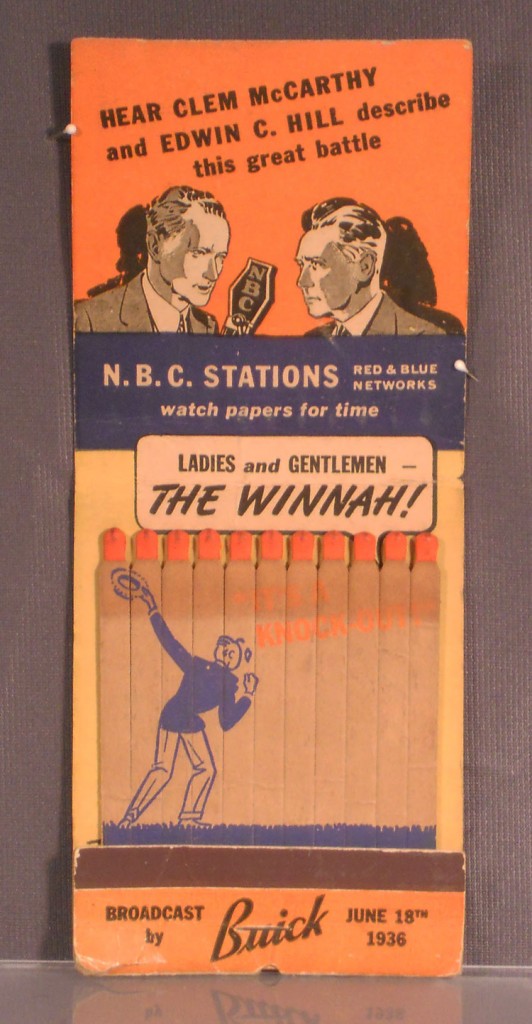 As far as matchbook history goes, most sources give credit to Philadelphia lawyer Joshua Pusey for patenting the matchbook in 1892.  The Diamond Match Company purchased the rights to the patent in 1894.  The concept of using the matchbooks as a means of advertising was a bit slow to take off. Then, in 1902, Diamond Match Company salesman H. C. Traute got an order for 10 million matchbooks from the Pabst Brewing Company.  This is considered the first large-scale order.

Traute also came up with the words so familiar on practically every matchbook:  Close Cover Before Striking.

The 1930’s, 40’s, and 50’s are considered the Golden Age of matchcovers.  Billions upon billions were made, and they advertised EVERYTHING.  The Lion Match Company’s timing with its Feature matches was perfect.

Sometime in the late 1930’s or early 1940’s, the Feature matchbooks became smaller in size.  This “Win With Wendell Willkie” is a very desirable matchbook because, in addition to the feature matches that show ordinary American citizens, it is also a “Display” matchbook with a “pop-out” photo of Willkie on the inside cover.  It’s the size of a standard matchbook. 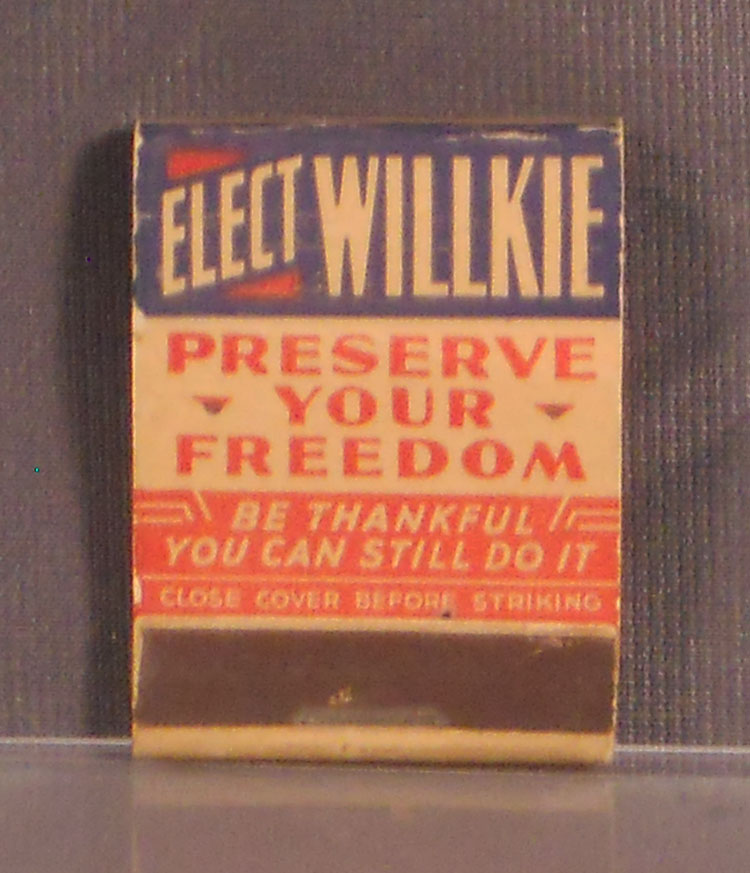 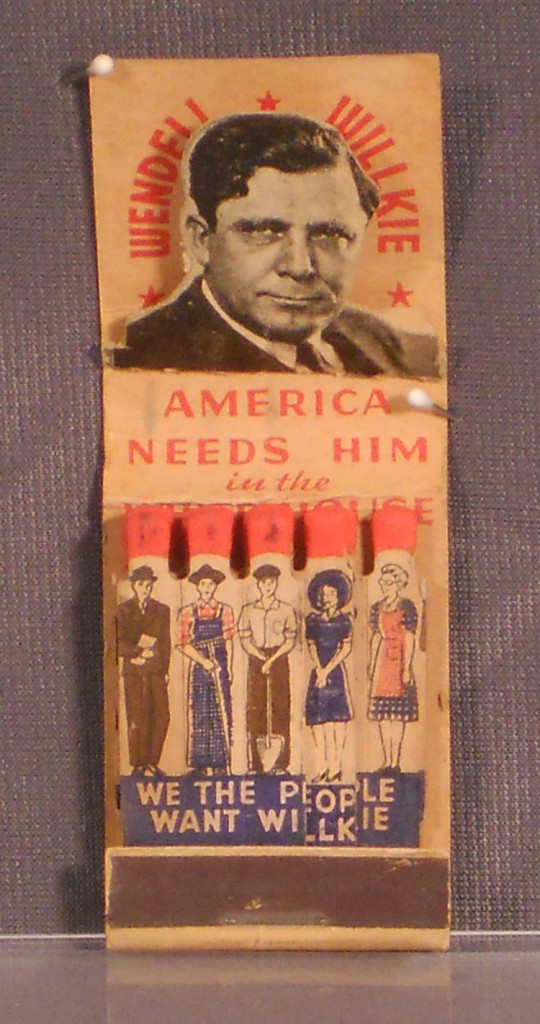 Slightly larger (2 inches wide instead of 1 ½) is the book of Leopold Morse matches.  This, too, is a Feature Display matchbook with a lot of patriotic fervor.  Apparently Leopold Morse was a congressman, but, more importantly, he sold men’s clothes. 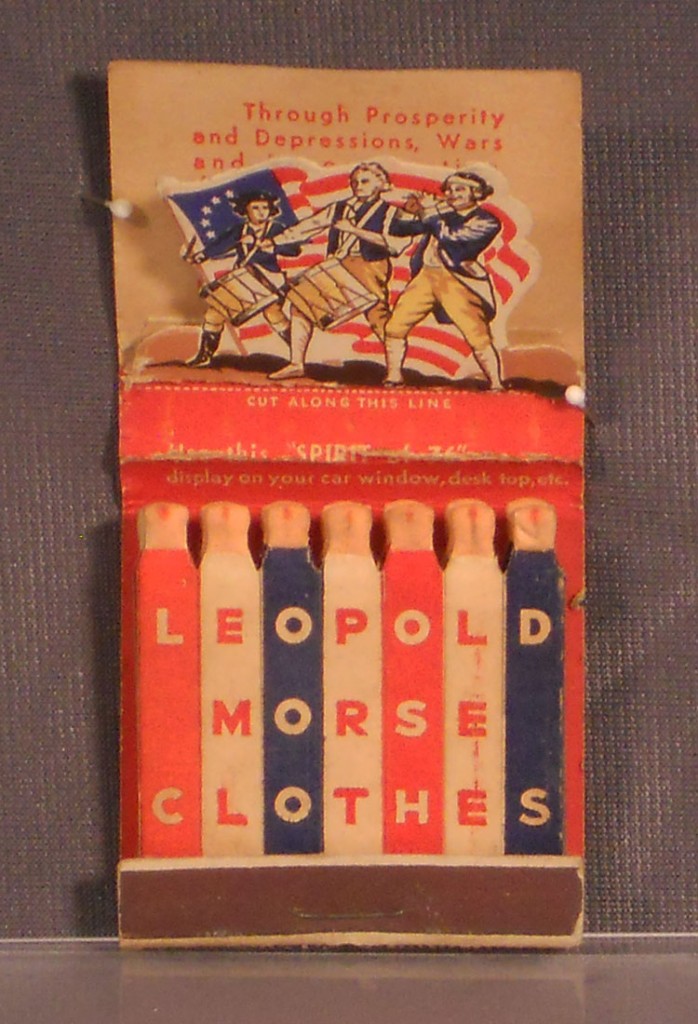 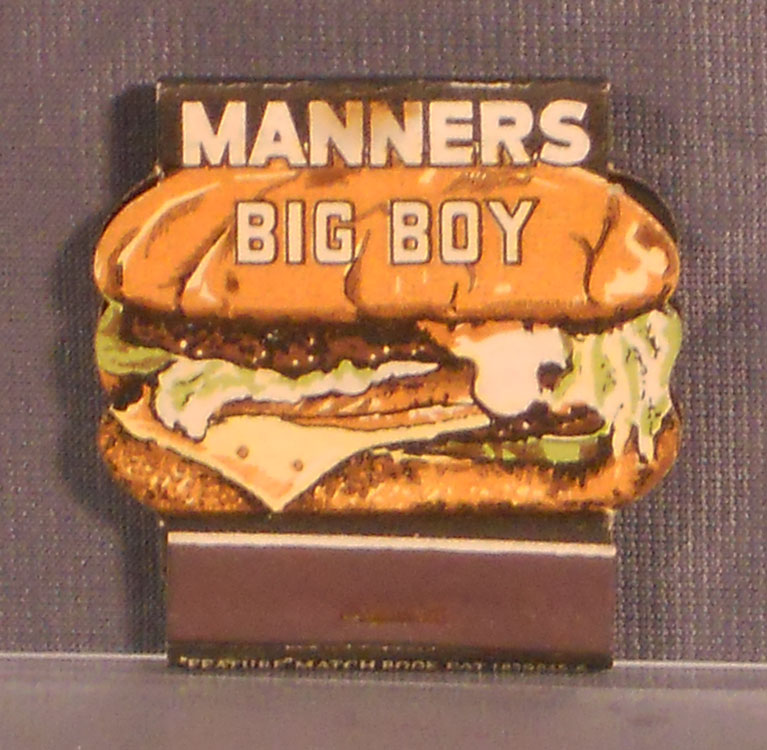 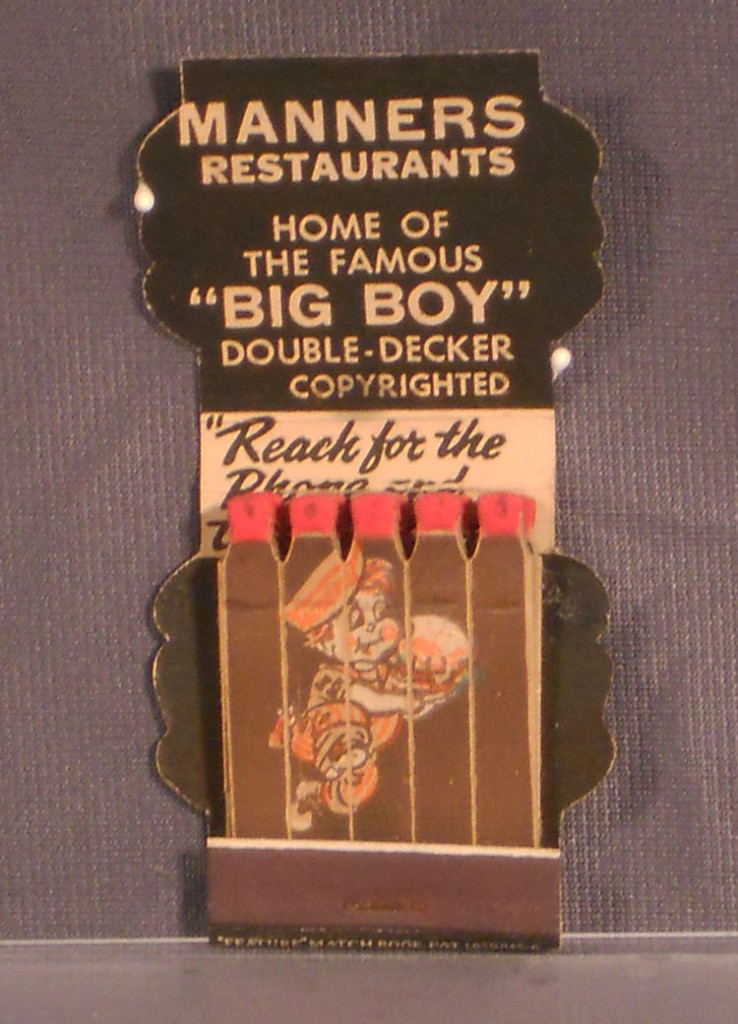 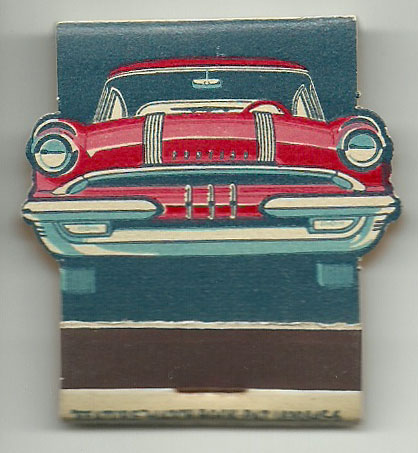 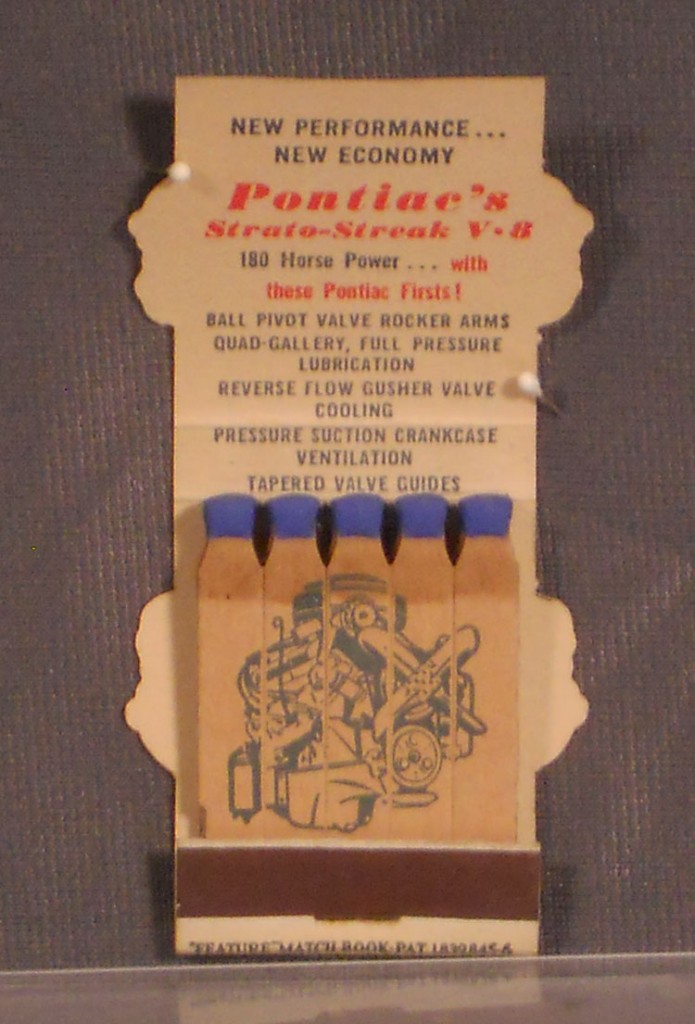 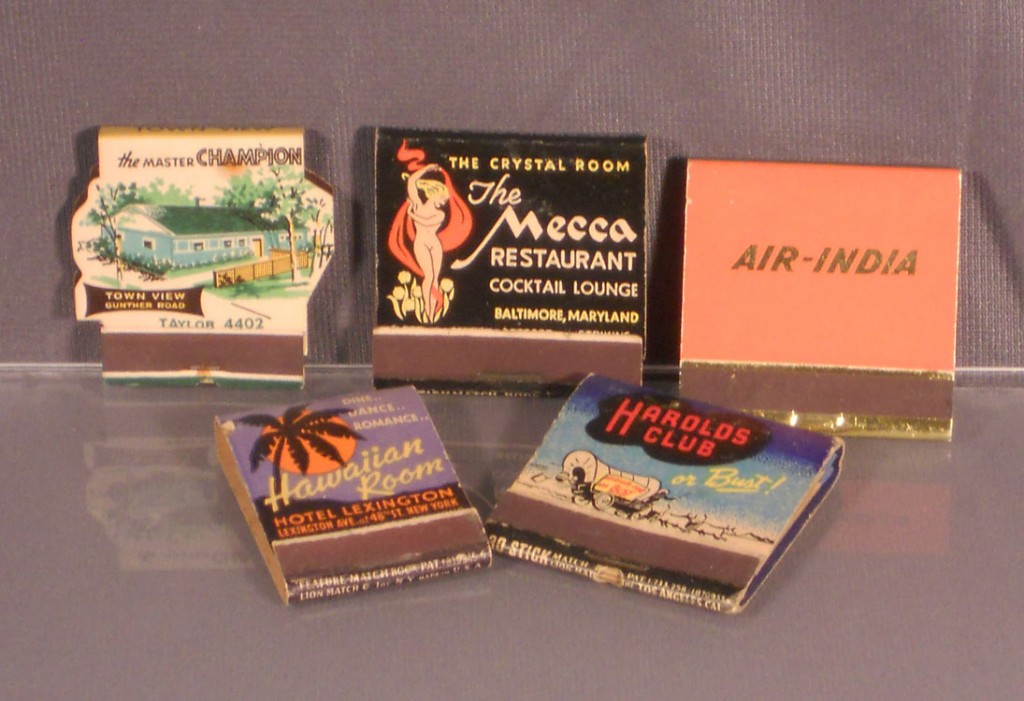 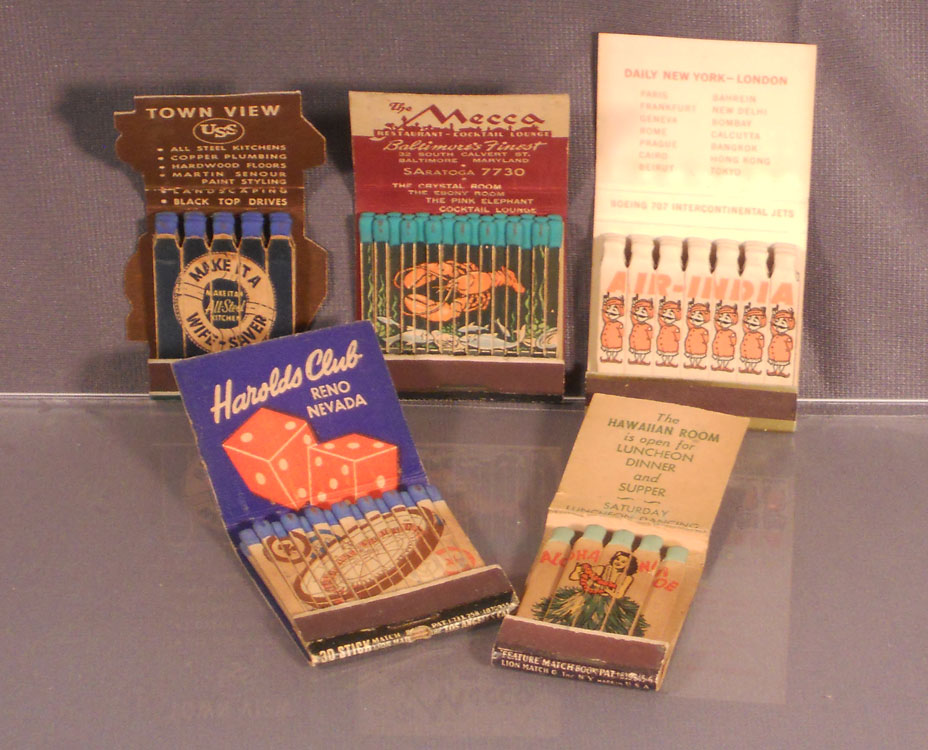 6 Responses to Feature Matches: These Matches Should Be Featured in Anyone’s Collection