Victory Speed – The Road to Victory was Slow

In terms of history, few events have been studied or recounted more than World War II.  From a collecting perspective most of the emphasis has been on militaria.  Collectors are still looking for and paying good money for those war prizes brought home by our GIs and resting in attics and basements across America.  In recent years, more attention is being paid to the objects worn and used by American soldiers and sailors as well.   Few can argue that the “Greatest Generation” did our nation proud and defeated not just one but two determined foes on opposite sides of the world.

It should also be remembered that this was a total war, and every single American was supposed to do his part in winning the final victory.   Everyone on the “home front” was also required to make sacrifices and do without in an effort to make sure the boys overseas had everything they needed to win the war.

Rationing was a big part of the sacrifice.   Prices were frozen on certain commodities such as meat, sugar, tires, and gasoline.  If you didn’t need it, you were supposed to do without it. 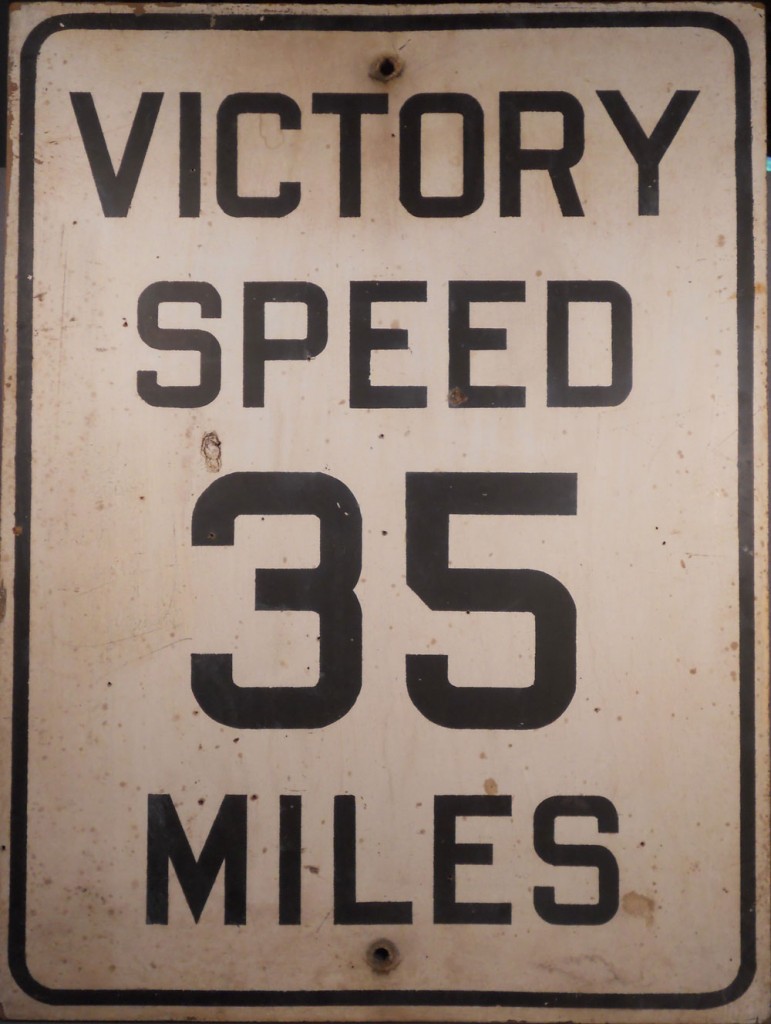 Automobile use was limited, and the amount of gas you could get depended on your needs.  About half of America’s cars were considered “nonessential” and issued an “A” sticker to be placed in windshield or rear window.  The “A” sticker was good for three or four gallons a week.  A “B” sticker meant you needed your car to get to and from work and were eligible for 8 gallons a week.  A “C” sticker was reserved for mail carriers, doctors, and people who needed their cars on a regular basis (when doctors made house calls).

No matter how you used your car, however, the maximum speed from May of 1942 through August of 1945 was 35 miles per hour.   To make drivers feel a little better about it, 35 miles per hour was called “Victory Speed”.  The idea was that driving slower would reduce wear and tear on tires as well as use less gas.  Tires were the real problem since the Japanese had overrun the rubber plantations of the Dutch East Indies – where the US imported 90 percent of its rubber.

I recently came across this “Victory Speed” sign at a flea market.  It is painted on a Masonite board, which would make sense given the strategic need for metal in the war effort.   I think it represents an important part of how life changed during the war for nearly everyone.   It should also be noted that seventy years ago we did not yet have an interstate highway system.  The first such highway, the Pennsylvania Turnpike, had only partially opened in 1940 (speed limit was set at 70 after initially having no speed limit).  As a result, it was probably a little easier for people back then to live with such a slow speed.  I can’t imagine how people could live with it today!

I’m sure highway departments all across the country were only too happy to discard these signs once victory was achieved.