A Busy Day in Dollville, My First Encounter with Bessie Pease Gutmann’s Art

Some antiques and collectibles reach out and grab you.  Your brain tells you, “I must have that!”  So it was when I saw the small metal sign entitled, A Busy Day in Dollville.  Dated 1911, it advertises Diamond Dyes. 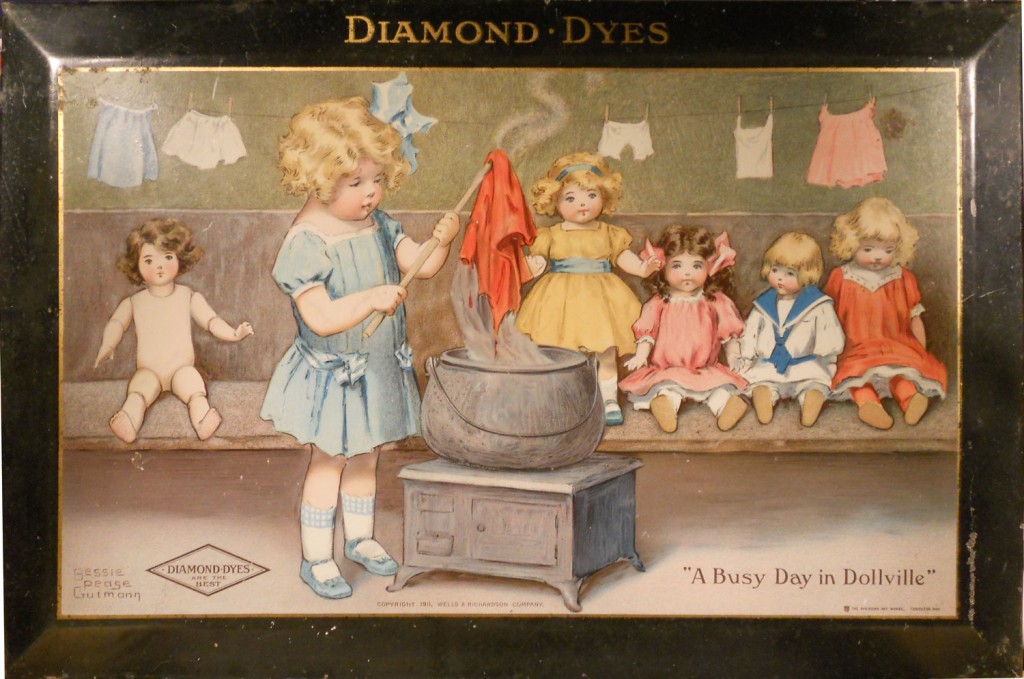 The year was 1979.  The price was $130.  Normally, I would have balked at such a large expenditure but not that day.  Jim didn’t have to twist my arm at all.

At the time, we were veteran collectors of antique advertising, but we worked on a somewhat limited budget.  We knew that Diamond Dye cabinets were highly sought-after country store collectibles, and we had even managed to acquire a couple of them at reasonable prices.  This sign, we knew, was rather rare.  And the image of the little girl dying her doll’s dress was so sweet and appealing.  (Never mind that a small child standing close to a boiling pot of dye on a stove is insanely dangerous!) In a matter of minutes, the transaction was complete and the sign was on its way home with us.  Since then, it has always been prominently displayed with our other advertising pieces.

Quite honestly, I don’t know how familiar I was with the artist Bessie Pease Gutmann when we bought the sign.  However, we didn’t have to do any research to find out that she painted the original picture; her name is prominently signed on the lower left corner of the image, and there’s a rather detailed description about her on the back of the sign.  The Wells & Richardson Company, makers of Diamond Dyes, was justifiably proud that they were able to reproduce the painting of so famous an artist.  When the sign was made, it was the first time that any of Gutmann’s art was used in advertising.  I can’t find any confirmation that it remained the only advertising item attributed to her, but it may well be.

As the years have gone by, I’ve become quite familiar with Bessie Pease Gutmann’s art.  Anyone who frequents flea markets and antique shops is bound to encounter her famous baby prints, A Little Bit of Heaven and The Awakening many times over.  Once, back when I was writing for a local newspaper, I visited the home of a Bessie Pease Gutmann collector.  Every inch of wall space in her living room, dining room, hallway, stairwell, and bedroom was covered with rare and beautiful prints, many of babies and children, but many of beautiful young women and romantic couples as well.  It was an eye-opening experience for me, and while I don’t actively collect Bessie Pease Gutmann, I always recognize her prints and take a moment to admire them when I see them.

Finding biographical information about Bessie Pease Gutmann is not all that easy.  Apparently, she gave very few interviews in her lifetime.   She was born in Philadelphia in 1876, studied art at several schools as a young woman, and was an independent commercial artist when Gutmann & Gutman, a company that did art prints, hired her in 1903.  Three years later, she married Hellmuth Gutmann, her boss, and had three children who often served as her models.  She was a working mother long before working mothers were commonplace.

Bessie Pease Gutmann illustrated 22 magazine covers between the years 1906 and 1920.  She illustrated books and created innumerable art prints.  However, as far as I know, there is only one self-framed tin advertising sign that bears her work, and that is A Busy Day in Dollville.

A search of the internet will turn up many examples of this illustration, but nearly every one of them is a reproduction.  The original has a black border and measures 11 ½ by 17 inches.  In addition to the 1911 copyright date, it is also well marked as being manufactured by American Art Works of Coshochton, Ohio, one of the premier makers of tin signs and trays during the first decades of the 20th century. 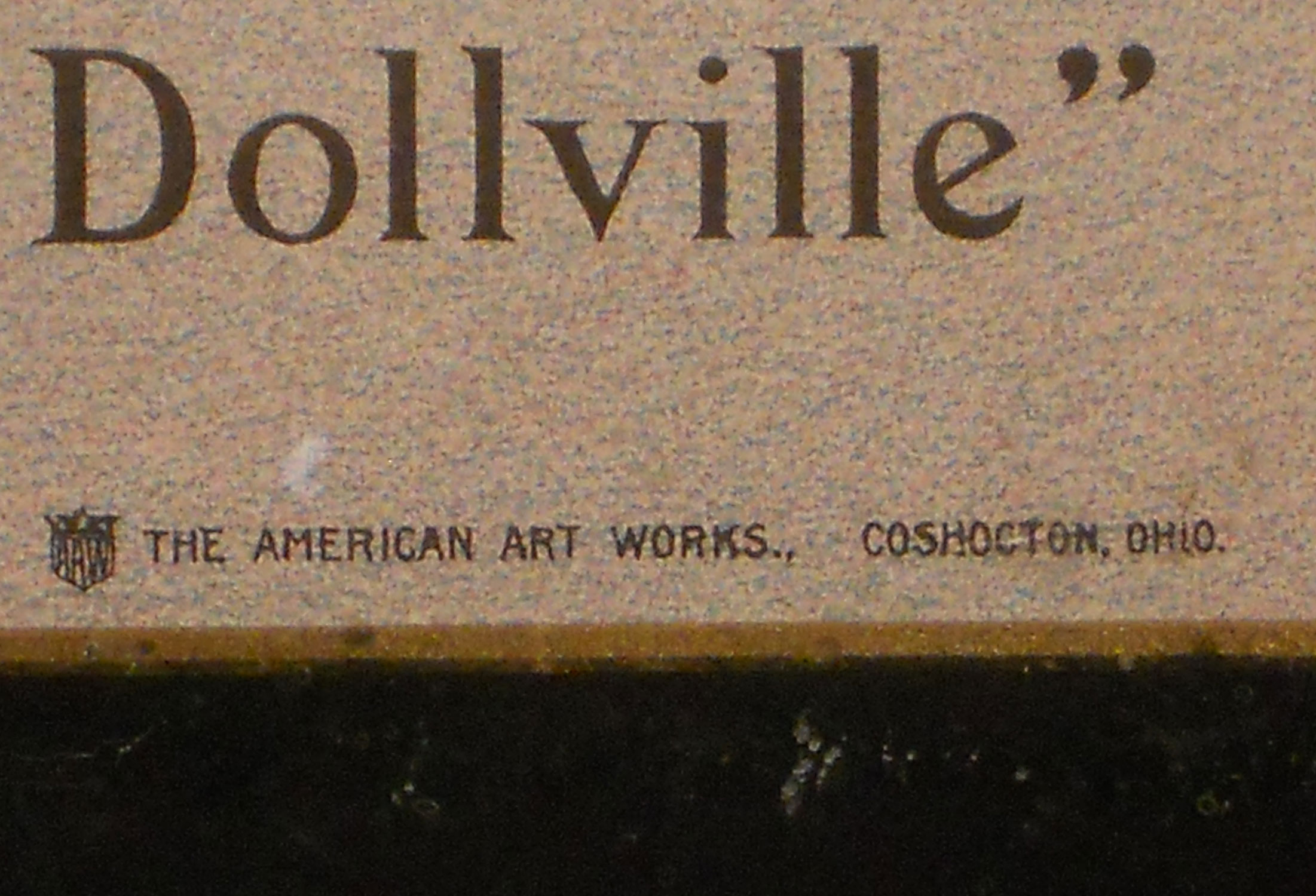 Finally, a clear sign that you have an original is the cardboard backing with the lengthy description of Bessie Pease Gutmann’s work. 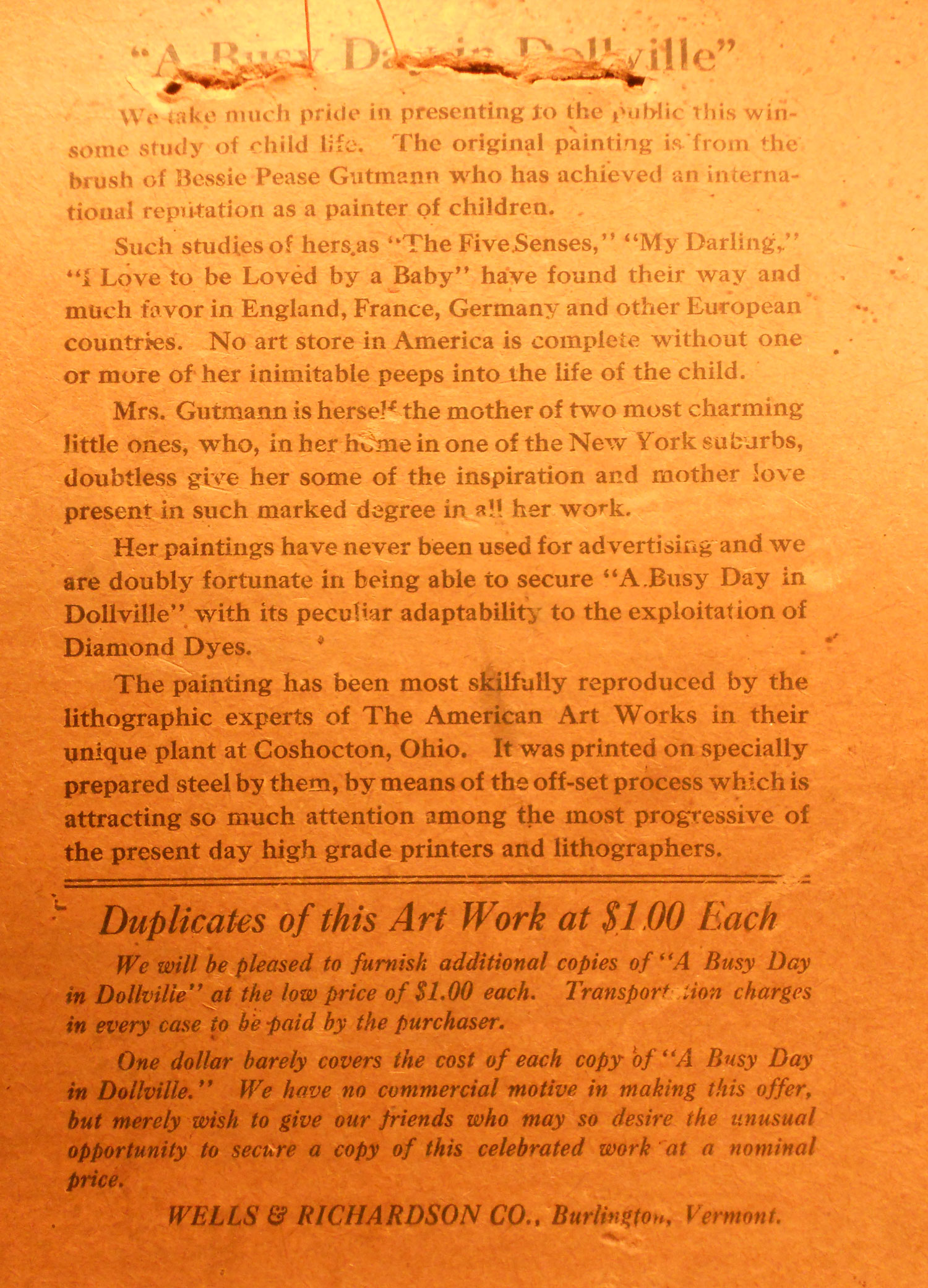 “Winsome” is one of the adjectives used to describe this illustration on the reverse of the sign.  I knew that I had won something when I purchased it.  It was an appreciation for an early 20th century artist who knew exactly how to capture her subjects’ expressions in such a way that she couldn’t help but elicit an emotional reaction from the viewer.  A Busy Day in Dollville remains to this day one of my favorite pieces of advertising art.

This entry was posted in 1910's, Advertising, Americana, Art, Carol. Bookmark the permalink.

12 Responses to A Busy Day in Dollville, My First Encounter with Bessie Pease Gutmann’s Art