Actually it’s one month, two days, and one hundred and fifty-two years ago as I write this. We apologize for posting our Fourth of July article so late, but a big storm in June zapped our printer (which is also our scanner) and we’ve been on another road trip to New England that we just returned from. Consequently, we are acknowledging the Fourth of July in August. 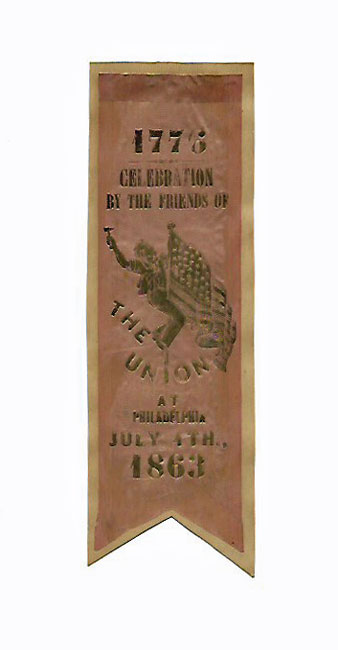 I picked up this little ribbon at a flea market about a week or two before the Fourth of July this year. I paid about twenty dollars for it, and the picture of it pretty much explains what it is. It is just under seven inches in length.

What gives an antique value is often what it represents. There was a lot going on in and around Philadelphia leading up to the Fourth of July, 1863. Most importantly, Philadelphia and the rest of the United States were right in the middle of the Civil War.

The spring of 1863 had not been a good time for the Union forces. Robert E. Lee and the Army of Northern Virginia had won stunning victories at Fredericksburg and Chancellorsville, Virginia. In June, his forces had entered Pennsylvania with the hopes of bringing the North to the peace table to end the war with a negotiated peace. This would have brought about an independent Confederate States of America.

There was a very real possibility that Harrisburg and Philadelphia would end up under Southern occupation. Philadelphia was shoring up its defenses and there were calls for more militia units to defend Pennsylvania.
Fortunately, as things were looking their darkest, Union forces finally checked Lee’s forces at the Battle of Gettysburg – about 100 miles west of Philadelphia. The three day battle, which took place on July 1,2,3, was not only the bloodiest battle of the war- it was the turning point. Lee’s forces never came that far north again.

I doubt that the citizens of Philadelphia had been able to absorb all that had happened in just those few days, but there must have been a great sense of relief. When the “Friends of the Union” celebrated the Fourth of July, 1863 in Philadelphia, they were also celebrating the turning point of the war and one of the most important events in American history.

That’s a lot of history in one little ribbon found at a flea market.