I think I tried skateboarding about twice in my life. There’s an old adage about how if you don’t succeed, well, by golly, you just pick yourself up and try again. Not me. I couldn’t get the hang of it and knew enough about my dexterity (or lack thereof) to know that I wouldn’t be pulling off any incredible tricks in my entire life.

This was made all the more incredible by the fact that I grew up in a time where knowing how to properly skateboard inevitable made you the coolest person. Bart Simpson did it. Marty McFly did it. Wally Bear did it in an effort to warn you about the dangers of drugs. And by the time I had grown too old for cartoons and teddy bears telling me not to smoke marijuana, there was a newfound skateboarding popularity craze thanks to Tony Hawk.

It’s no surprise that toy companies tried to capitalize on the coolness of skateboards. One of my favorite toy lines of all time is Kenner’s Savage Mondo Blitzers, basically a hodgepodge of grotesque and wacky creatures who traveled in “gangs” on their skateboards. (The line was even called Skateboard Mania in Greece.) But an even stranger toy line appeared years prior, and in many ways, toys like these might justify why I never mustered the courage to really try and become good at skateboarding.

In 1986, Playtime Toys (not to be confused with Playmates Toys) decided to capitalize on the “gross out” craze that had made Garbage Pail Kids and Madballs into overnight success stories. They created a toyline called Skateboard Smack Ups. There is no accompanying storyline, so we’re not sure what the relationships are between these characters. The package simply states that these toys feature “Real SKATEBOARD action! Hi-Speed Wheels!” and that you should, of course, “Collect them All!” 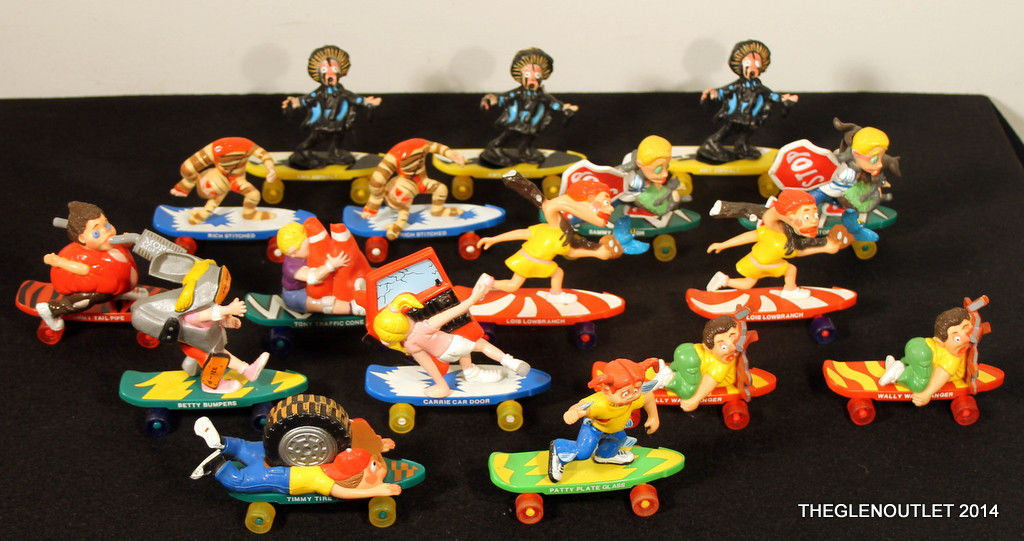 This amazing collection was sold on eBay recently.

But then you take a closer look at the characters themselves. For example, Wally Wallbanger met with an unfortunate accident when he skated head first into a brick wall. Ouch! Then there’s Patty Plate Glass, who looks like she skated through a window and is still riding despite the fact that shards of glass have punctured her body and split her head open. While these injuries no doubt sent these children to the emergency room, none are quite as disturbing as Tammy Tailpipe, who not only has a tailpipe that went THROUGH her head, but she’s quickly billowing out as she gets filled with exhaust fumes. SHE SHOULD BE DEAD!

Collectors of these 80s curiosities love the designs because, let’s face it, a toy line like this probably wouldn’t get made today, although if you didn’t want your child to skateboard, I’m pretty sure he or she would be completely turned off from the hobby via these outrageous toys.

Because of their relative obscurity, obtaining a set is a difficult-but-not-impossible task. I was able to collect all 12 figures without too much trouble…assuming that those 12 figures were the only ones made. Little did I know a fortuitous set of circumstances would lead me to the rarest of all Skateboard Smack Ups toys.

Last year, my sister and I acquired a large collection of Toy Fair catalogs from the mid-to-late 1980s that were given out at the International Toy Fair. These catalogs show what companies have planned out for their various toy lines, but because these are meant to showcase what will be produced if they have the means of producing them, they often serve as a showcase for several rare unproduced toys that simply did not see any time on shelves because toy stores didn’t order enough to justify it. One of the catalogs we obtained was the Playtime Toys 1986 catalog, which showed the Skateboard Smack-Ups line.

Imagine my surprise when I saw one I didn’t recognize: a deluxe, motorized one called Manny Manhole. Based on the image, this battery-operated toy was significantly larger than the rest of the toys in the line and therefore couldn’t have been packed alongside the other 12 figures in the series. I said, “Well, I guess they never produced that one!” and went about my day.

Since I had completed my set a while ago, I hadn’t thought about what the figures were worth, but I decided to take a look at what they were going for on eBay just to see if people were still interested in them. Imagine my surprise when someone had actually listed a boxed example of Manny Manhole! By gar, it was produced!

After being listed at a rather high Buy-It-Now price for close to a month, I contacted the seller about making an offer. Clearly, he appreciated the rarity of the item as much as I did. We came to an agreement, and while this item was on the expensive side, I knew the likelihood of me finding another boxed example was relatively slim. 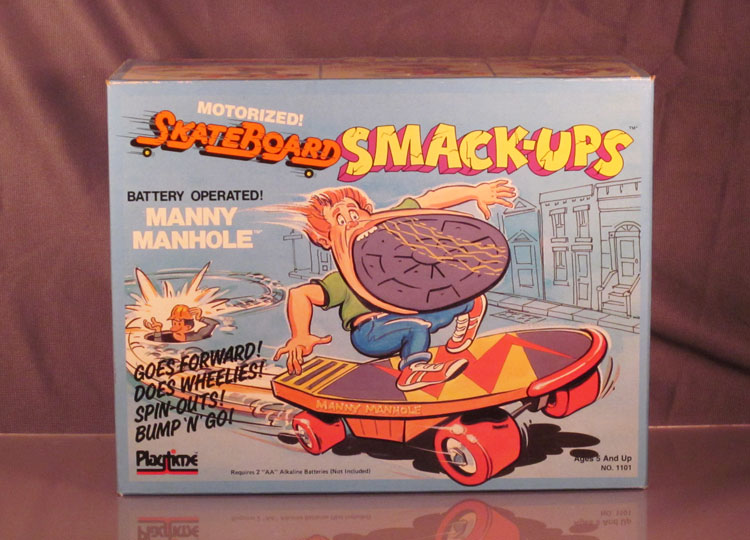 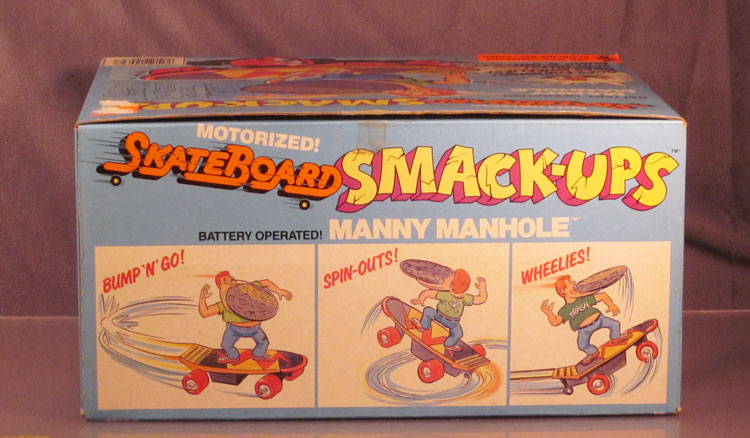 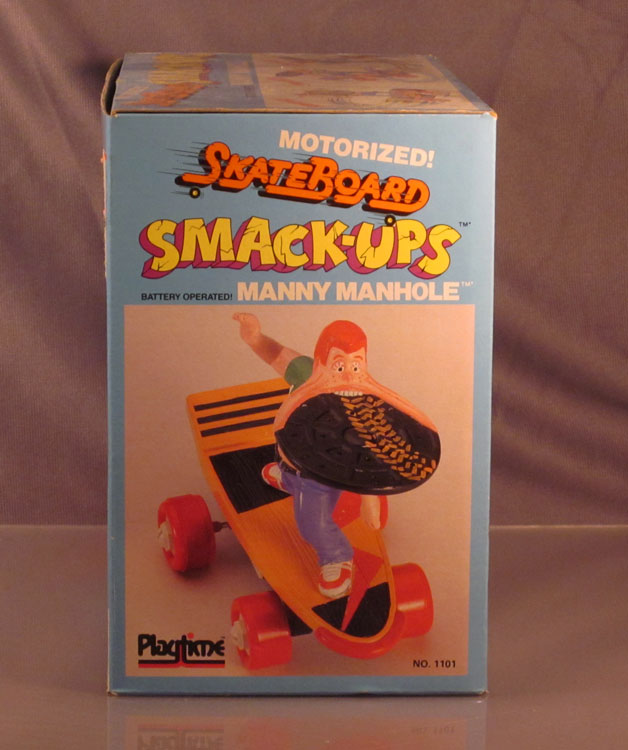 In person, he’s pretty interesting. The box is fairly sizable to accommodate a figure that is at least twice as large if not three times as large as every other figure in the line. He’s also the only character in the entire line to have artwork created exclusively for his character, as everyone else was thrown on a generic blister card. Because he’s significantly larger than the other characters, Playtime Toys actually added stickers to his t-shirt. The back features the classic skull-and-crossbones design, while the front simply has the phrase “Trash” on it. Awesome! 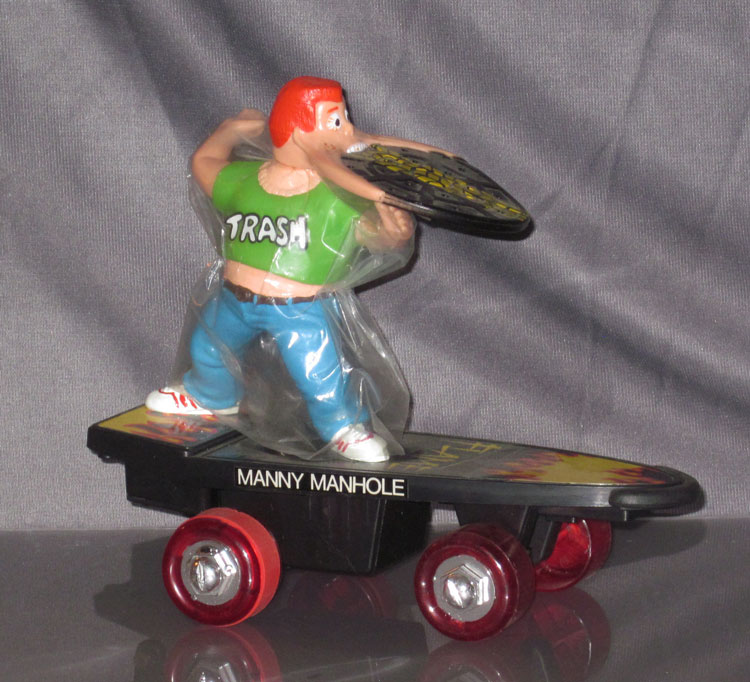 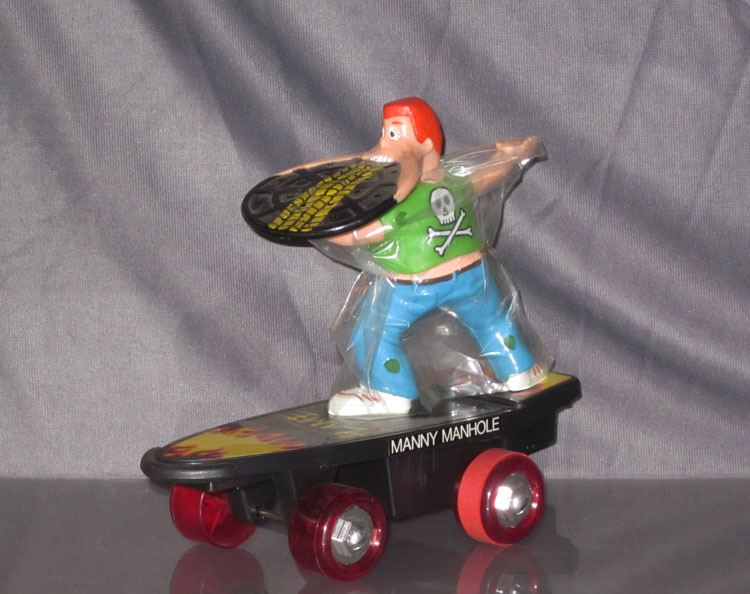 The box also gives me a clue as to how this figure could have been obtained. There is enough price tag residue for me to determine that this had to be sold at Toy Liquidators. The toy soldier on the “alkaline batteries” sticker also gives it away, but I know enough about the look of various stores’ price tags to know that this was sold by Toy Liquidators and not Kay Bee Toys. The seller said it was obtained from a comic store that had acquired a large selection of “dead stock” toys, so while this toy is unused, it must have seen at least some shelf time.

It’s very possible I could have remained patient and found this toy for a much better price at a flea market or yard sale (and given my track record, it’s entirely possible). However, while I’m more a fan of loose toys than packaged examples, I don’t mind having a packaged example of old Manny here. If I found one loose, he probably wouldn’t work, and considering the stickers on his shirt are peeling even with a plastic bag keeping him all together, I doubt a loose example would have both of the stickers intact.

In addition to educating the public on Manny Manhole, I hope that readers found this page through appropriate means. While I encourage you to Google Manny to see that nothing really comes up, unfortunately, other instances of Manny Manhole are not so PG-13 in nature.

Leave a Reply to The Sewer Den Cancel reply