As a long time Disney collector, I have learned that there is a ton of junk on the market with Disney characters on it.  At this point it takes a special or rare piece of Disneyana to get me excited.  While I have a lot of nice pieces in my collection and it is hard to pick a favorite, a couple of my favorite Disney pieces happen to not involve Disney characters at all.

As an artist it is always my goal to own original art work from people I admire.  Of course, original art tends to get very expensive.  The two pieces I am showcasing today were relatively inexpensive, probably because they are unsigned, but their provenance is what I liked most.  They are a fascinating snippet of Disney history that a lot of people don’t know about, and kind of go against the family friendly, squeaky clean, Disney image.  This post is a little bit NSFW (Not Safe For Work since we don’t tend to post this kind of stuff on The Collector Gene).  You have been warned.  Don’t blame me if your boss catches you reading this nerdy article (Bet you never thought you would read Disney and NSFW in the same sentence!).

Disney animators worked long hours every day tirelessly animating those classic films of your childhood.  Sometimes those guys needed a break, and what did they do?  They drew pictures for fun.  It’s what working artists do.  They create art for someone else all day, and then in their time off they create art for themselves.  The Disney animators were known to draw caricatures of each other fairly regularly.  They would slip them under each other’s office doors to egg each other on, or comment on the events of a day.  These caricatures are highly sought after by Disney collectors, especially if they come from Disney’s Nine Old Men, his top group of animators from the 30’s- the 60’s.

I do not own one of these caricatures (though I happily would), but what I own is another fun tradition from the studios in the 40’s and 50’s.  Pinup drawings.  We all know the classic pinup girl paintings from the 40’s and 50’s.  Varga girls and Bette Page are well known today.  Well, the young men working at Disney Studios were just as fascinated by these paintings as any other red blooded heterosexual male of the time, but when they just drew them it happened to be with a Disney twist. 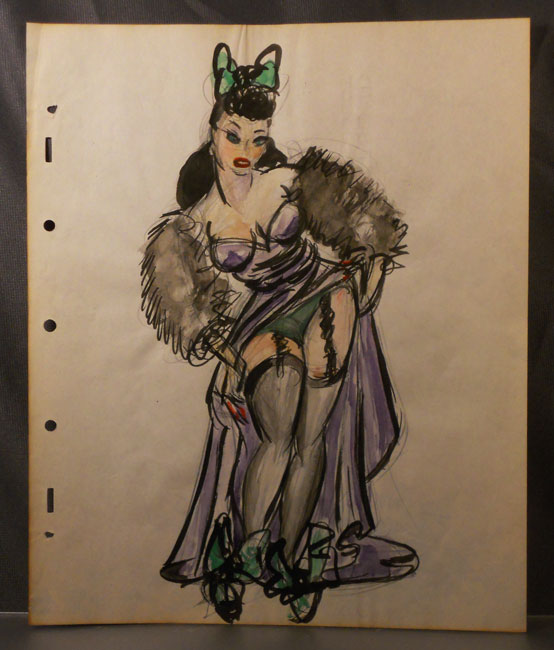 This one ain’t too naughty.  Well, on today’s standards it ain’t so bad. 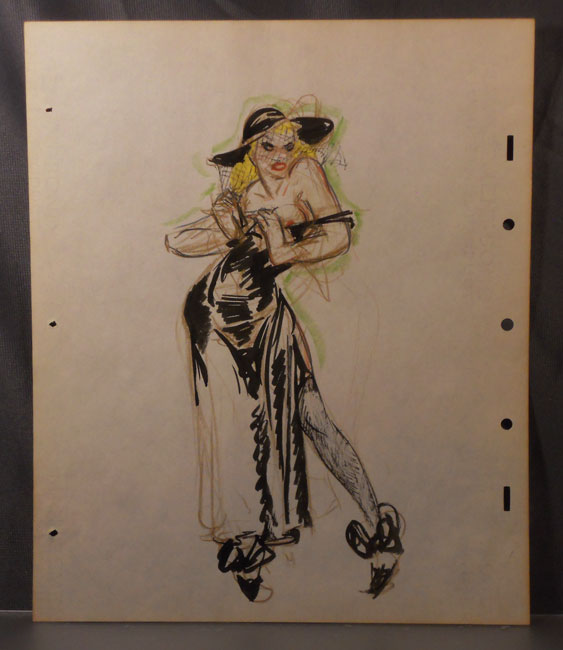 Here’s the NSFW picture.  Again, not too bad on today’s standards but pretty racy for the time.

Okay okay.  Insert cartoon wolf howling and stomping his foot on the floor with his tongue hanging out.  Firstly, you might notice the holes in the edge of the paper.  These lovely ladies were drawn on perforated animation paper.  That’s the paper the guys at Disney had laying around.  These are beautiful quick sketches by a Disney artist who was happy enough with his work to add a little water color as well which makes them that much more beautiful and dynamic.  They have a ton of energy and life to them, where you can almost see their movement as they strike their permanent pose.  Clearly this artist was well versed in pinup imagery.

Unfortunately my Disney pinups are unsigned.  There is reference in the book “Disney Animation: The Illusion of Life” by Frank Thomas and Ollie Johnston (two of Disney’s Nine Old Men) that references artist Fred Moore drawing pinups in studio, but looking at his work I don’t think these are his. 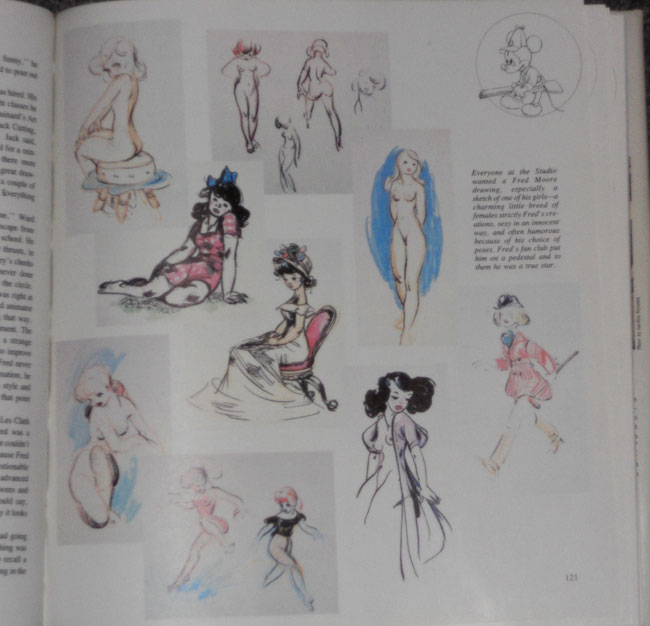 I have seen a signed Ollie Johnston pinup on eBay once before, so we know more than one artist was drawing these pictures.  In fact the eyes on both of my drawings remind me of the eyes on the Centaurettes in Fantasia, which were animated by Frank Thomas and Ollie Johnston, so it is possible one of them could have done these.  This is probably wishful thinking on my part, but I’ll tell myself it’s a possibility.  I can only attribute the works at this point, but it is fun to think an important animator could have worked on them.

I find these fictional portraits to be very beautiful and well executed.  Frankly, I see most pin up drawings and paintings that way.  I also love that they represent a seedier side to the Disney animator.  Yes, Disney animation is family friendly and made for “children of all ages”, but I don’t think the goal of the artists was ever to make things perfect and squeaky clean.  I think they were artists trying to create the best possible quality of work that was possible at the time they were working.  The family friendly nature of things was more for marketing to make the money to create such elaborate and beautiful animation.  I think just like most young men of their day, they enjoyed thinking about naked women as much as the next guy.  Remember, Playboy didn’t come out until the 50’s, and these drawing seem to predate dirty magazines.  What’s an artistic lad to do but to draw naked women for himself?  It was a simpler time.  No one associates Disney with gratuitous sex, which makes these pieces of Disney history all the more interesting to me.  They are proof that these guys were human and had normal human flaws and needs just like you and me.  I guess when you stare at pictures of cutesy animals all day, you gotta do something to bring yourself back to reality.

One Response to Disney Pin-ups.