Having cool friends makes me want to yell “COWABUNGA!” at the top of my lungs.

I was born in 1983, so I was about six years old when the Ninja Turtles phenomenon had really swept the nation. They were inescapable by 1989. Knowing the names of the four turtles was as essential as knowing the alphabet by the time I hit kindergarten.

There have always been hard core Teenage Mutant Ninja Turtles fans, but I think that fandom has become much more mainstream in recent years, and a lot more collectors are hunting for key pieces. Certain vehicles and playsets in mint condition are commanding prices that I couldn’t have dreamed of years ago, regularly reaching hundreds of dollars. I think for many years, collectors were turned off because there’s just so much TMNT merchandise to collect. It was a very successful franchise and while not as daunting to collect as something like Star Wars, it’s certainly up there in terms of popularity and the breadth of items to collect.

I was very heavily into Ninja Turtles in 1989 and 1990, but by 1991, they were replaced by Toy Biz’s X-Men figures in my house. Like any phenomenon that gets as popular as Ninja Turtles, there are a few key years where EVERYONE is into them, and then they move onto other things. But my friend Brian was different. He was completely loyal to Ninja Turtles well into their popularity and stuck with them long after most of my friends had given up on them.

Brian and I remain friends all these years later, and since we bonded early on by our shared love of toys like Battle Beasts and checking out flea markets, we often bring up those subjects in conversation all these years later. During one of these conversations a few years ago, Brian made the kind of claim I hear a lot as an action figure collector: “I had EVERY Ninja Turtle figure.”

Not to brag, but I consider myself a pretty well-versed expert on the topic of action figures, so whenever someone claims they had EVERYTHING in a particular line, I immediately become suspicious. There are several incredibly rare Ninja Turtles figures that were released after most kids collected them, and even if a kid was still actively adding Ninja Turtles to his collection as late as 1994 or 1995, it’s entirely possible that they might have missed one of these rare figures.

Knowing that I was suspicious, he said, “What’s the rarest figure?” And without hesitation, I said Scratch. (I know some people will certainly debate this, but he is certainly among the top five rarest figures and is at the very top of most collectors’ want lists.)

Released in 1993, Scratch was one of a handful original characters released very, very late in the Ninja Turtles line. By 1994, the line became mostly variations of the main characters, both heroes and villains, so Scratch was one of the last completely new action figures to be released. He is literally a “cat burglar,” a mutant cat in a black-and-white jailbird outfit. While several other characters who were in the same assortment as Scratch are also very, very difficult to find, Scratch appears to be the absolute most difficult figure to find from this particular assortment.

When I described to Brian what the character looked like, he said, “Oh, I have that.” He probably knew that wasn’t good enough for me. After all, I had been led onto claims like fellow classmates owning Rocket Firing Boba Fett figures before. But Brian did have a particular advantage when it came to toys growing up: his mom worked at K-Mart, so whenever new Ninja Turtles figures were put on the shelves, his mom got first dibs. So it was entirely possible that with a connection like this, he could have gotten his hands on Scratch as a kid.

During one of his trips back home, he had me go down with him to his parents’ basement to look for his boxes of Ninja Turtles toys. We started rooting through, and sure enough, he held up a figure and said, “Is THIS the figure you were talking about?” 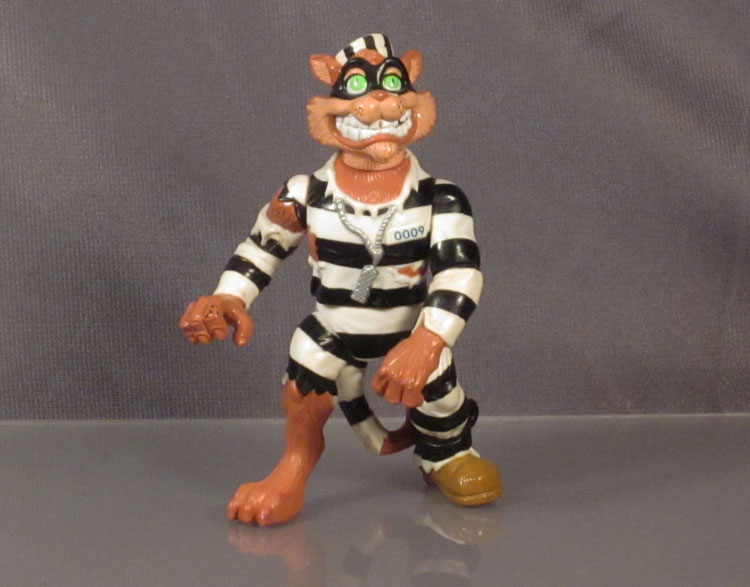 That moment was the first time I had ever held an honest-to-goodness example of Scratch. Brian wasn’t lying. His mom probably picked up the only Scratch figure that ever hit the shelves of our local K-Mart. While Brian clearly loved his toys, he was also about 11 or 12 years old by the time Scratch came out, so he was in much better shape than the rest of his childhood collection.

Seeing my excitement, he let me have the figure. Pretty cool, right? Still, I don’t consider myself the owner of the Scratch that I display on one of my toy shelves. Instead, I consider myself more of a caretaker. If I’m ever tempted to sell it, Brian gets the money. I mean, I HIGHLY doubt I would get rid of such a rare figure, and I’m honored that it’s getting proper display instead of sitting neglected in a basement. And it’s very cool that I can trace the lineage of the toy back to the original owner.

The moral of the story is that you should keep in touch with your childhood friends and pick their brains about their various toy memories. You might be surprised what you’ll find! Just don’t resort to Scratch-like antics and wind up in jail trying to get your grubby paws on some rare items!