I think at this point we’re all convinced that Santa Claus has superpowers. Now, granted, he has to conserve his energy for an entire year so he can fly to every child’s house in the entire world at incredible speeds that would rival those of the Silver Surfer. He also has to manipulate his body to be able to fit through chimneys a la Mr. Fantastic. He also has the powers of The Watcher in that he knows what all children are doing at every waking moment.

I’d like to think that if Santa Claus was the star of his own monthly recurring comic series, he’d have to battle various villains whose sole purpose is to thwart Santa on the one day where he really matters, and it stands to reason that other Marvel Superheroes would have to come help Santa get his work done on the big day.

That’s the story I’m telling myself for why this set of dime store or rack toys (most certainly intended to be stocking stuffers) features Spiderman and the Hulk.

These toys are part of the “Santa’s World” line by Kurt S. Adler. The Adler name is synonymous with this festive time of year, as they claim to be “the leading importer of holiday decorations for 60 years.” In the 1970s, products like the Hallmark Keepsake Ornaments were still in their infancy, so the idea of a company churning out a specific line of various holiday decorations was still relatively new. What sort of shocks me is that with a little bit of digging, I’ve been having difficulty scrounging up any other licensed characters used in the “Santa’s World” line, at least while the same packaging was used. 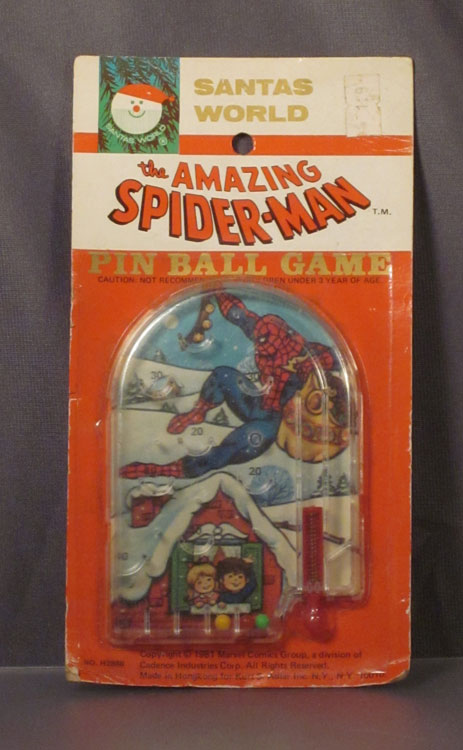 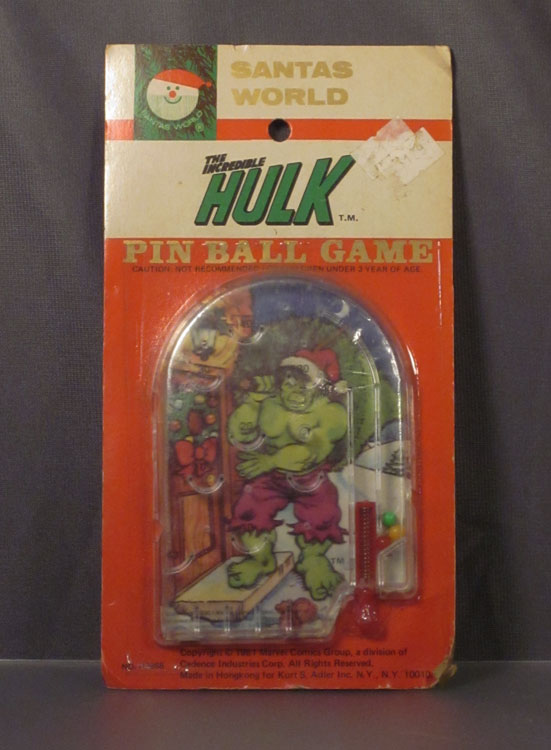 The toys are fairly basic. Among the three that I own, I have pinball games featuring Spiderman and the Incredible Hulk delivering gifts. Spiderman could easily swing through chimneys, and he sort of specializes in stealth. But Hulk? Sure, he’s big and strong enough to wield a magical sack filled with millions of toys and gifts, but how is he going to get down the chimney? Also, he’s looking rather festive and happy. Isn’t he angry at something? Perhaps the Hulk was angry at Santa for not bringing him, like, a new pair of purple pants or something, so he incapacitated the jolly old elf and took his job from him. Merry Christmas. 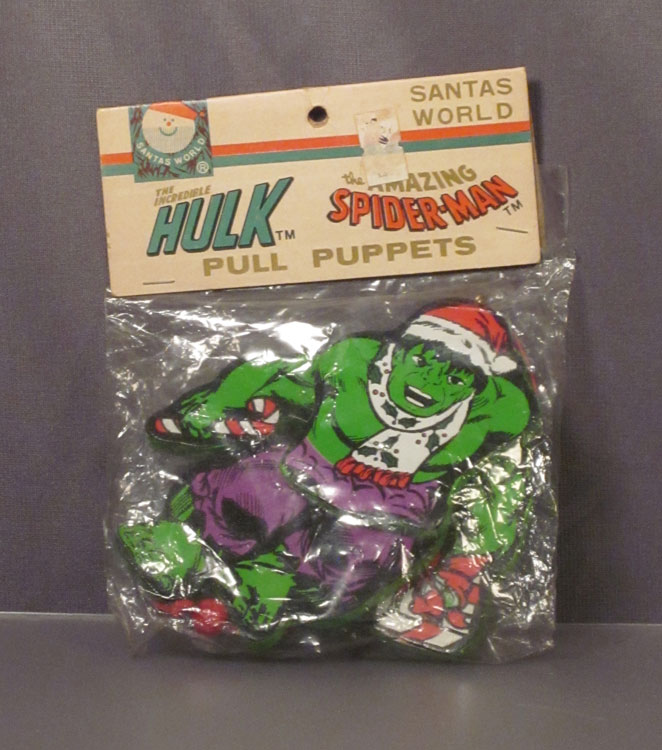 On that delightful note, my favorite of the lot of toys that I own is this Hulk-as-Santa pull puppet. It’s a whimsical take on a gamma radiated-super being that will likely destroy us all if his alter ego gets the least bit upset. It’s old world meets modern (well, 1970s modern), in that it’s a popular character in the form of a toy that would have been much more popular decades prior when this didn’t have Mego’s World’s Greatest Super Heroes toys to contend with.

What I particularly love about all of the imagery is that it’s so straightforward. You can tell the artists are having fun with the characters, but they’re not trying hard to be overly ironic or stylish. It’s Spiderman and the Hulk pretending to be Santa, plain and simple. These are fun in the same way all those wonderful Hostess Fruit Pies advertisements are fun.

A cursory search revealed that these are pretty hard to get. The Santa’s World line was also responsible for a series of comic books featuring a variety of Marvel characters.

While these aren’t exactly the most exciting superhero toys ever made – although that statement might be the biggest understatement on all of Collector Gene – if you are even mildly a fan of either Marvel Superheroes or Christmas, these are just about the perfect stocking stuffer that was ever made or will ever be made.

This entry was posted in 1970's, Christmas, Comic Characters, Toys. Bookmark the permalink.

One Response to Santa’s World Marvel Stocking Stuffer Toys: Spiderman and The Incredible Hulk See You When You’re Sleeping!

Leave a Reply to The Sewer Den Cancel reply