I love monsters.  I always have ever since I was a kid.  They are colorful, creative, weird, and interesting.  The great thing about growing up in the 80’s and 90’s is that there were all sorts of cool monster toys not only in toy stores, but floating all over the flea markets and yard sales just waiting to come home with me.  “Gross” and controversial monster toys found a market during my childhood in the form of Mad Balls, Weird Balls, Savage Mondo Blitzers, and all sorts of other smaller toy lines that caused a stir with concerned parents, but kids couldn’t get enough of.  I was lucky enough to have parents who didn’t see the problem with ugly and disgusting monster toys, so I had many of them.

When I walk down the toy aisle of my local departments stores I have to say that I find myself a little bit disappointed.  It is great to see some of the classic toy lines of my youth still thriving and exciting kids today, but there is hardly anything new and interesting happening in the mainstream toy world.  Small toy companies hardly exist as the giants buy up as many licenses as possible to cut out the little guy.  No one wants to take a chance on the next big idea when they can just re-market the same things year after year and make money at it.  I grew up in an era where everyone wanted to find the next big thing, and they would throw out any idea that sounded interesting to see if it stuck.  Then the small companies would make weird copycat toys to capitalize on those popular lines, and it was awesome.  Creativity was everywhere, and whatever you were into as a kid, there were plenty of toy lines capitalizing on your interests.

Recently some dealer friends of mine asked me to identify a toy line.  They are very knowledgeable on 80’s toys, so I was surprised that there might be something I knew about that they didn’t.  I certainly don’t consider myself to be an expert on the 80’s, but they knew I liked weird stuff so they thought I might have come across this toy line before.  I hadn’t.  I was just as stumped as they were.  We showed the toys to a few other very knowledgeable dealers in the room, and no one knew what they were.  This is a very rare occurrence as even a lot of the obscure and weird toy lines from the 1980’s are fairly well documented and researched among the collector community.  All I knew after seeing these bizarre plastic figures was that I wanted them for my collection. I needed to own these things.

The only information we had to work from was a toy company name and a date on the bottom of each figure.  They were marked “Creata 1986″.  If you haven’t heard of Creata, it is because they were a very small company that didn’t make much.  They capitalized on other successful toy companies by making knock offs to fool grandmothers and weird aunts who had no idea what the kids in their lives were really looking for.  Mostly what you will find if you do a Google search on Creata is a Gem doll knock off that they made.  Now, hopefully, since I am writing this article you will be able to find this incredibly weird toy line that they created called “Ugglies”. 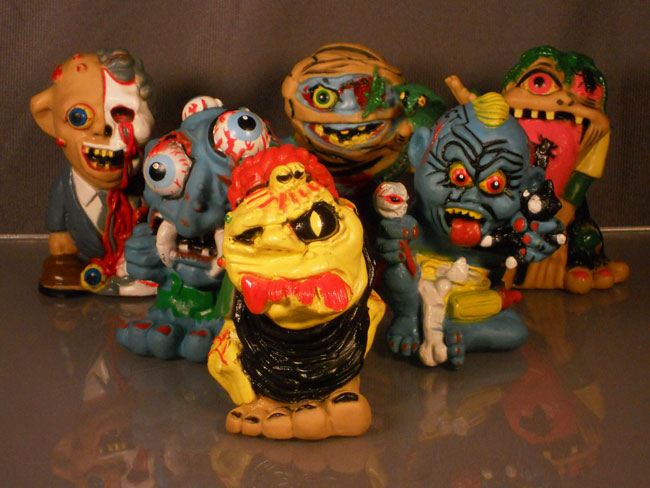 Is this a full set of ” Ugglies”?  As far as I can tell, it is not. According to the card back for the Ugglies, there are twelve in the set. Since these are the first I am seeing, I cannot tell you for sure whether or not every single figure was made, but if they were it will most likely be a long a tedious task for me to try and hunt the rest of the set down. The carded examples I am showing below were sent to me by another fan of the toy line. The figure examples they show are all among the figures that I bought, so until I see examples of the other six in the set I can’t be completely sure. It is not uncommon for toy companies to show toys on the back of a blister card that were never made. If anyone has any of the other figures I would love to share them with the world, and if you ever want to part with them I know a good loving home you can send them to. 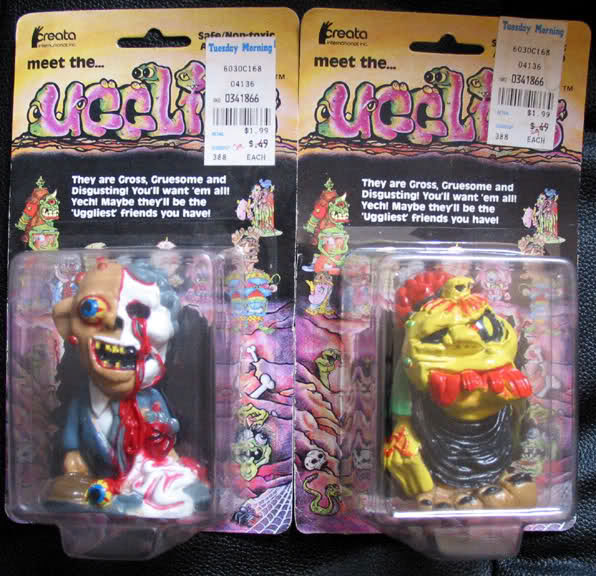 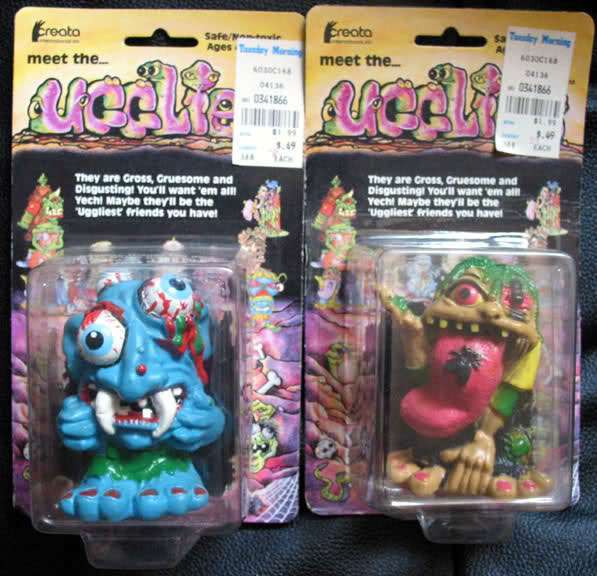 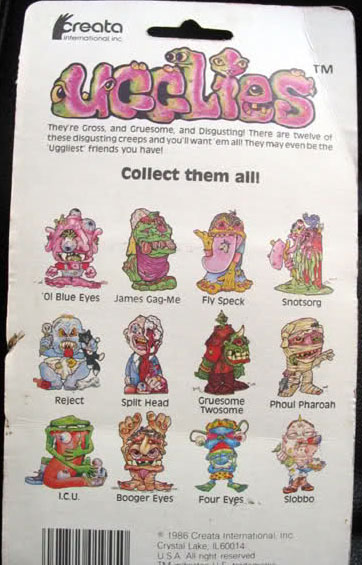 Here are some individual shots with names so you can get better acquainted with the Ugglies that I was able to obtain. 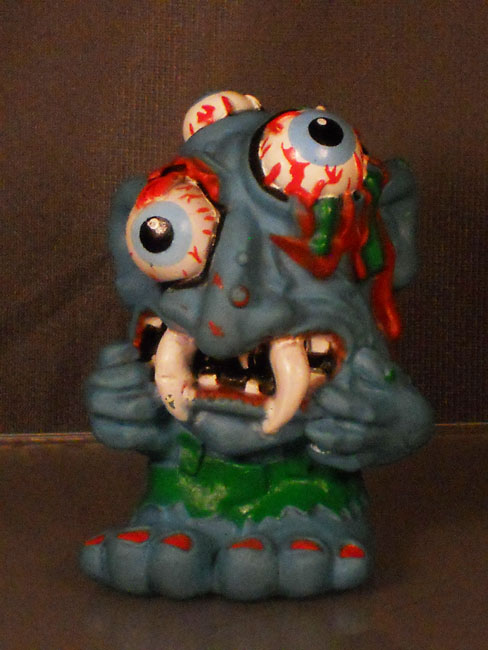 Ol’ Blue Eyes is one of my favorites, though it is very hard to pick a favorite. I think with the overalls he is wearing that Creata might be trying to make Ol’ Blue Eyes out to be a child? What a weird and wacky toy!  Also, he has a bolt in the back of his head.  I just wanted to make sure you noticed that. 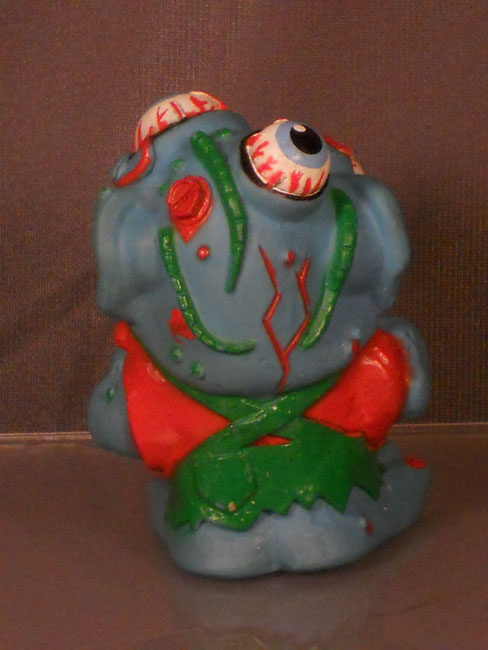 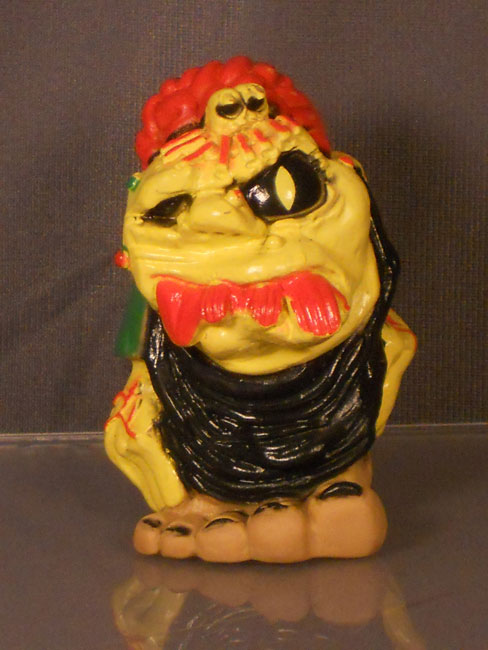 I think the name of this figure simply comes from the fact that the creators felt very clever for coming up with the name “James Gag-Me”. I love the eye in the back of his head. It kind of makes the figure for me. Also the fact that he has one giant foot.  These things are great! 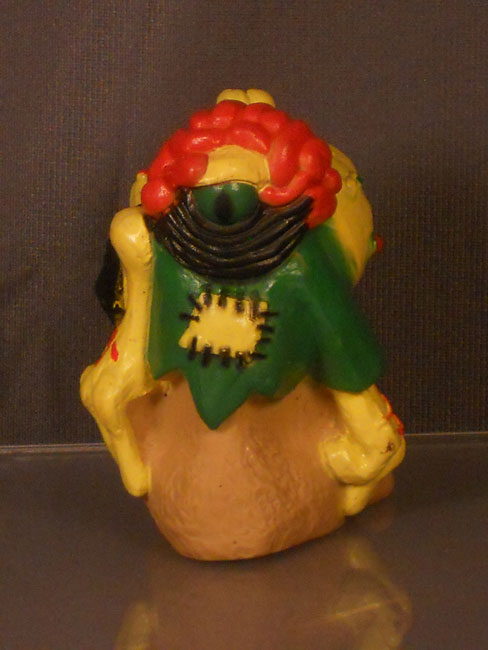 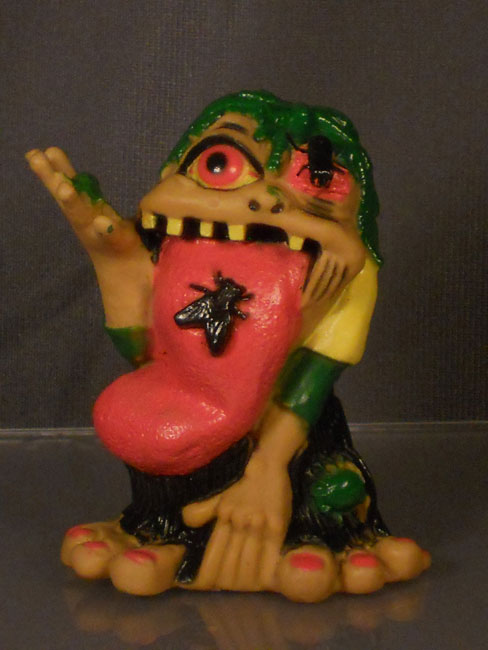 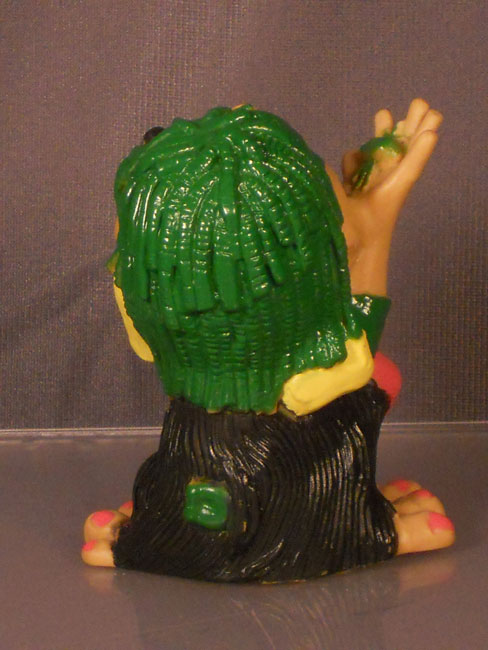 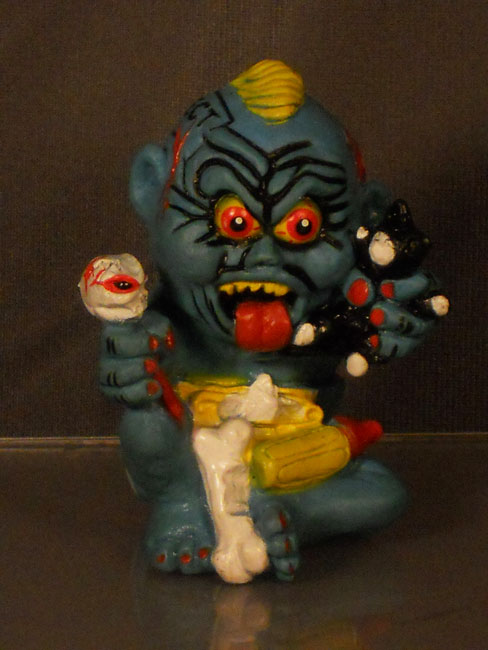 This is another one of my favorites. I go back and forth over which one is my favorite. Clearly I can’t choose. I am pretty sure Reject will haunt your nightmares. That poor cat. 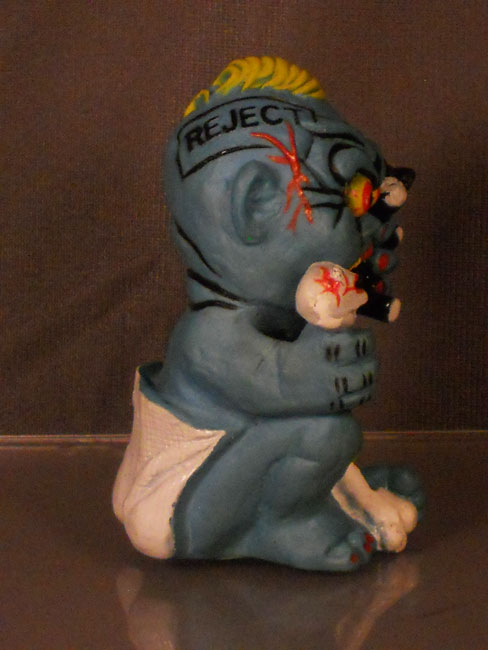 This one is most gross in concept, yet most simplistic in execution. For a second I thought all of these were supposed to be children, maybe knocking off of Garbage Pail Kids more specifically, but this one is wearing a business suit. Maybe I am over thinking the Ugglies a little bit… 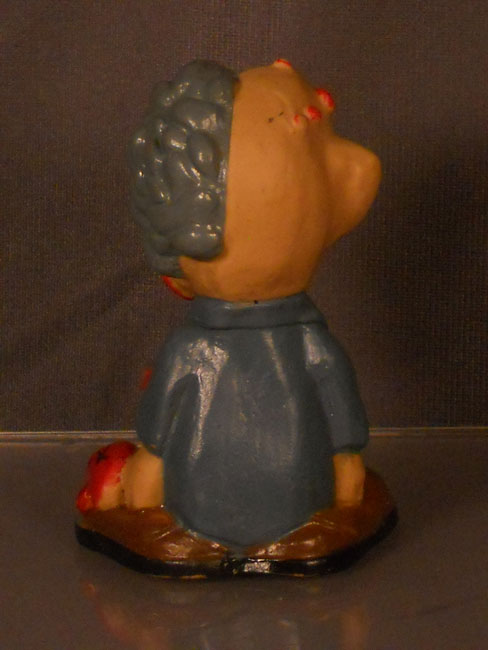 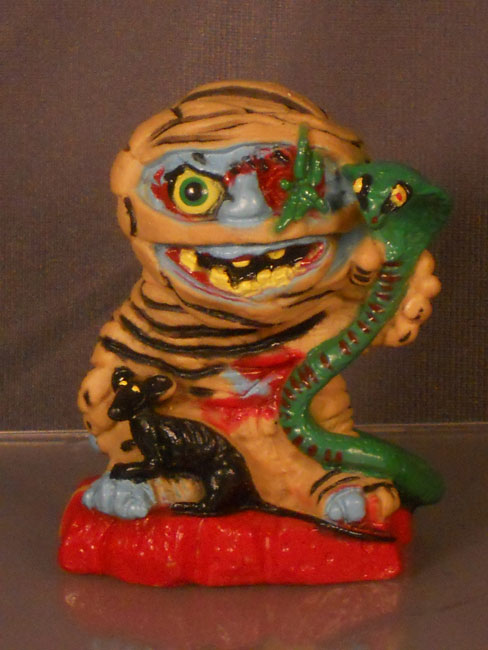 You might be thinking I spelled “pharaoh” wrong in the name there. Well, Creata spelled it wrong on the package. Maybe they did that on purpose, but I doubt it. A mummy isn’t exactly a creative concept compared to the other figures in the line, but I think this guy has a great design. 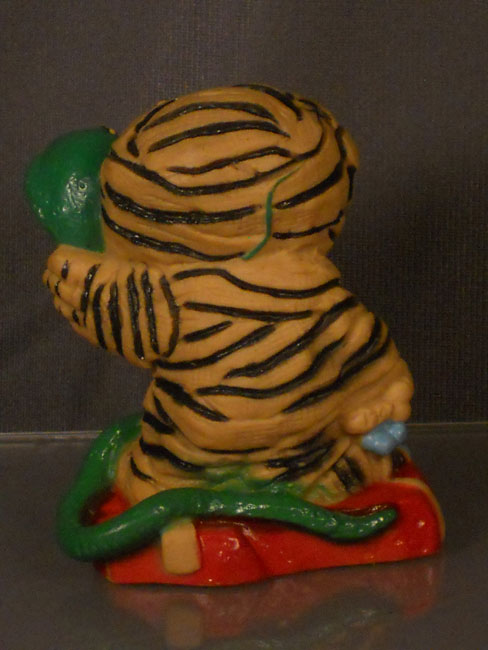 2 Responses to Meet the Ugglies!