Legendary television performer Dick Clark died a year ago on April 18, 2012 at the age of 82. Virtually every American over 18 alive today has some memory or association with him whether it be as the host of “American Bandstand”, the host of “The $10,000 Pyramid” (later “The $100,000 Pyramid”), or the host of “Dick Clark’s New Year’s Rockin’ Eve”.

Just as Sally Starr was a television personality closely associated with my Philadelphia area childhood, so, too, was Dick Clark. As a first and second grader, I clearly remember coming home from school and tuning in “American Bandstand” which was being filmed live just across the river in Philadelphia. I think I was fascinated by the dancing teenagers more than the rock and roll performers, but I also liked Dick Clark. He had a likeability factor that was off the charts, and it served him well in a broadcasting career that spanned seven decades and earned him accolades galore.

Just before Dick Clark died last year, Jim and I were in an antique shop in Pennsylvania when we encountered, for the first time, a 1950’s Dick Clark autograph doll. He was nattily dressed in a sports coat, vest, and slacks with a plaid tie and matching plaid socks (which we now know are actually plaid legs) and nifty black and white saddle shoes on his feet. Most amazing, however, was the doll’s vinyl face. It looked just like Dick did back in the 1950’s! 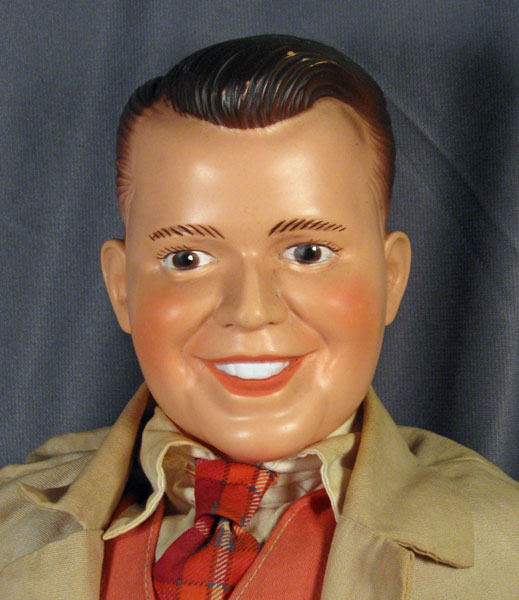 We couldn’t afford the doll when we saw it last year, but a few weeks ago, we found an example in very good condition at a much more affordable price, so we bought him. Here he is. 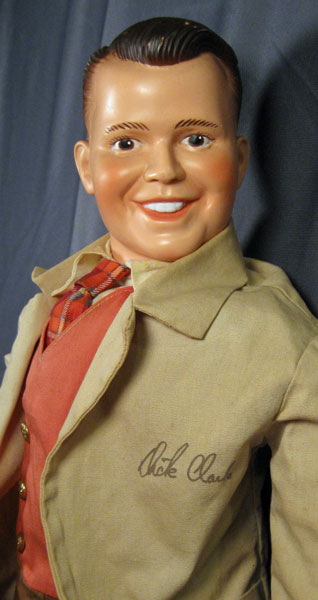 The only marking on the doll is a very tiny word “Juro” just below the hairline at the back of Dick’s head. This is the mark of the Juro Novelty Company, a New York based toy company that specialized in ventriloquist dolls such as Charlie McCarthy, Mortimer Snerd, Jerry Mahoney, and Knucklehead Smiff. The company was in existence from the 1950’s until 1977. The Dick Clark doll is not a ventriloquist dummy, but he’s obviously a very well made doll with a lot of attention to detail. According to my research, this doll sold for $7.49 back in 1958, which was a considerable amount of money at the time. Photos of the original box that the doll came in show that it was billed as an “autograph doll.” The doll’s jacket does have “Dick Clark” written on it. I guess the idea was for a teenage girl to get her friends to put their signatures on the jacket as well.

I found some additional information from a December 2009 entry on Kovels.com. According to their answer to a query, there were two sizes of Dick Clark dolls. The smaller size, which is the one we have, is 25 inches. There’s a larger one that’s 45 inches. That’s practically life-sized!

Dick Clark’s impact on American music in particular and American pop culture in general is inestimable. We’ve already had one New Year’s Eve without him, but at least at our house his memory will be kept alive this New Year’s Eve by this very life-like doll. 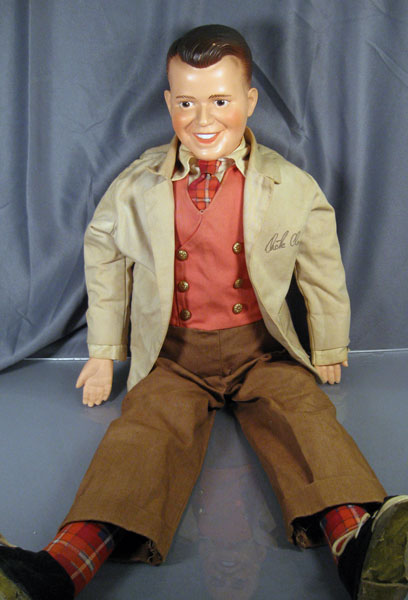 This entry was posted in 1950's, Americana, Carol, Dolls, Toys. Bookmark the permalink.

8 Responses to The Dick Clark Doll – An Amazing Likeness