When I go to a toy show or a flea market, chances are that I can afford whatever I want to buy. Granted, the things that I collect tend not to be terribly valuable. Most of the most valuable things I own in my collection are worth a couple hundred bucks each.

However, I do remember a time when I really started actively hunting for vintage toys and action figures that I simply didn’t have the kind of budget I do now. It didn’t help that much of my expendable income went toward new Star Wars collectibles for a good portion of the 2000s.

Still, even with a limited budget, I remember making some great scores back in the day. Today’s find was purchased back in 2004, and I remember the find vividly to this day.

Back when I was a wee lad in the 1980s and 1990s, my sister and I shared a special assortment of toys we referred to as our “monster collection.” While I primarily played with toy lines like Star Wars, G.I. Joe, X-Men, and Transformers as a kid, during the month of October, we would pull out an assortment of older figures my mom would pick up for us cheap at yard sales that would get us into the Halloween spirit. Monsters, goblins, dragons, orcs, spirits…anything that vaguely resembled something spooky found its way into this particular collection.

When 1980s nostalgia surged in the early 2000s, I was delighted to discover that our monster collection ran the gamut of action figure lines from my youth. Ghostbusters, Masters of the Universe, Blackstar, Madballs Head Poppin’ figures, Bravestarr, Mego’s Mad Monsters, Remco’s Universal Monsters, Rocks, Bugs, and Things…many different toy lines were represented across this assortment of random figures.

However, one toy line dominated our monster collection, and that was LJN’s incredible Advanced Dungeons and Dragons toyline. For many years, I had no idea which toy line these figures came from. All I know is that we had a bunch of them. Virtually all of them came from one yard sale that my mom went to while I was at some sort of youth art program thingee at our local county college. I think the figures were a nickel or a dime a piece, so my mom wisely decided to purchase every single figure for sale.

The value of the line has fluctuated wildly over the last decade. Unlike many of the most popular 1980s action figure lines, LJN’s D&D line did not have a corresponding cartoon designed to specifically promote the toyline. There was a Dungeons and Dragons cartoon, but virtually none of the characters from the action figure line made an appearance in the show (save for the hero Strongheart, villains Warduke and Kelek, and the five-headed dragon Tiamat, all of whom made cameos at various points during the series). However, since the toy line was not specifically made to promote a cartoon and vice versa, that gave LJN the freedom to create a colorful and inventive bunch of action figures and toys.

None of the toys from the Dungeons and Dragons line are easy to find, at least in the dust-covered bins of childhood action figure collections I run across at flea markets, and the assortments that dealers have for sale tend to include the more common first series figures. However, once in a great while, I have lucked out in my quest to collect this toy line, and my best find came in the form of the Fortress of Fangs playset. 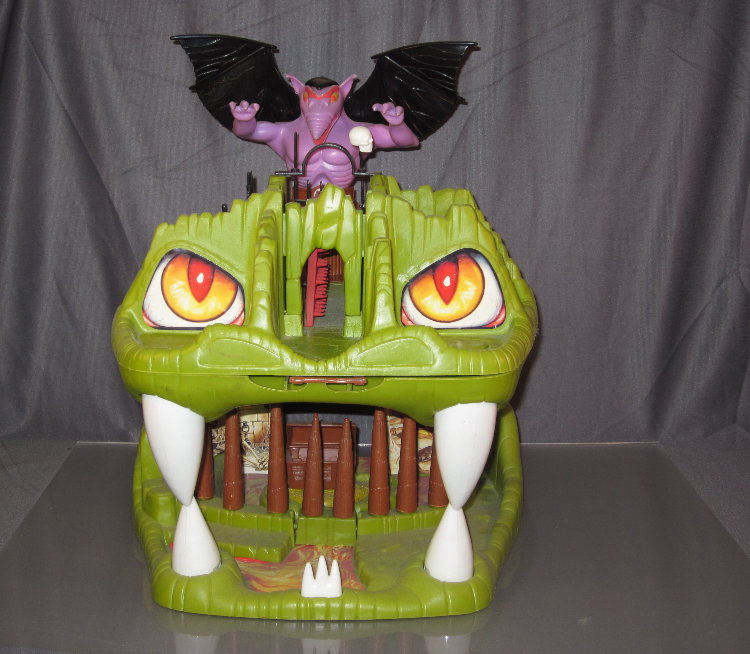 I really love this playset. I never associated it as a base of operations for either the heroes or villains, as was the case with most playsets from 1980s toy lines. The playset served as a fortress for a treasure chest full of gold. But beware! The Fortress was loaded with traps, including a trap door… 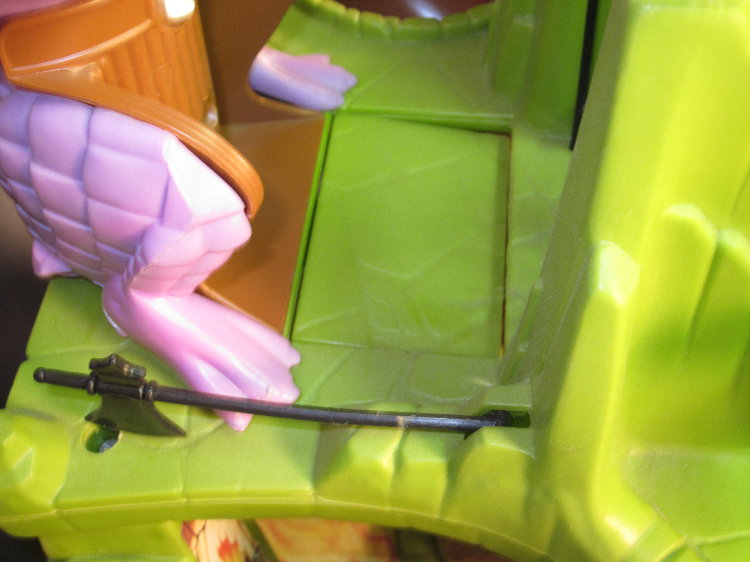 …a hole that figures could slide through… 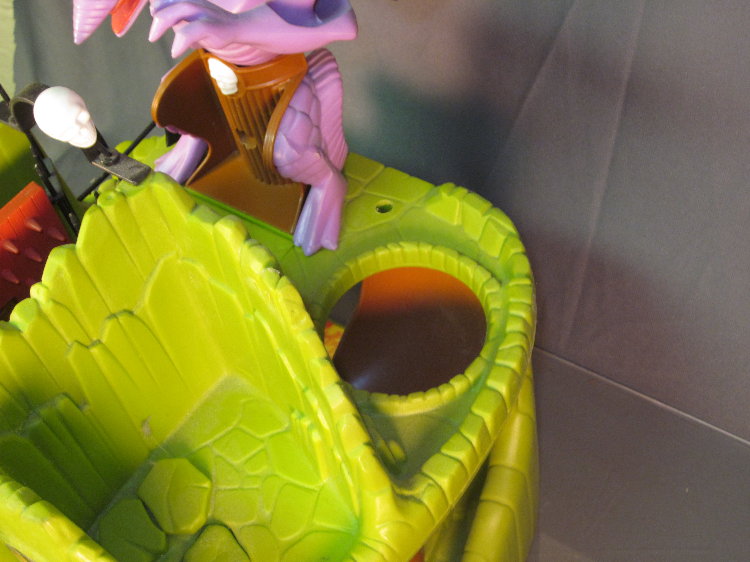 …a catapult that would launch figures off of the Fortress… 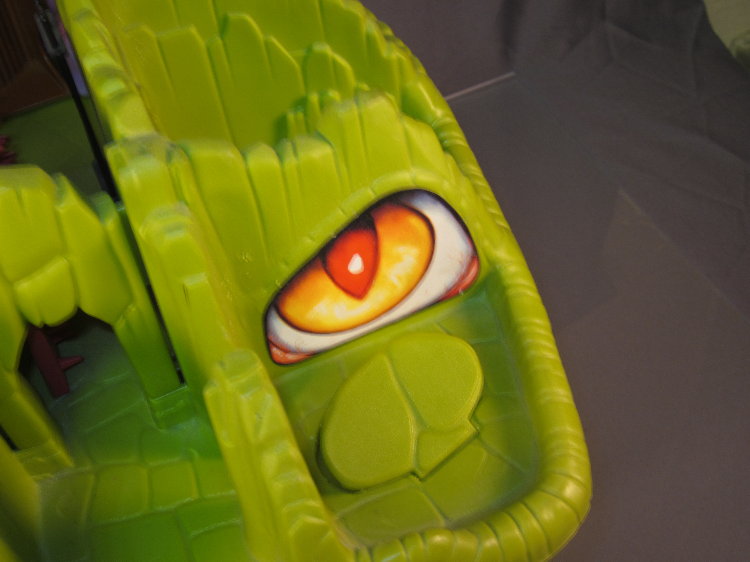 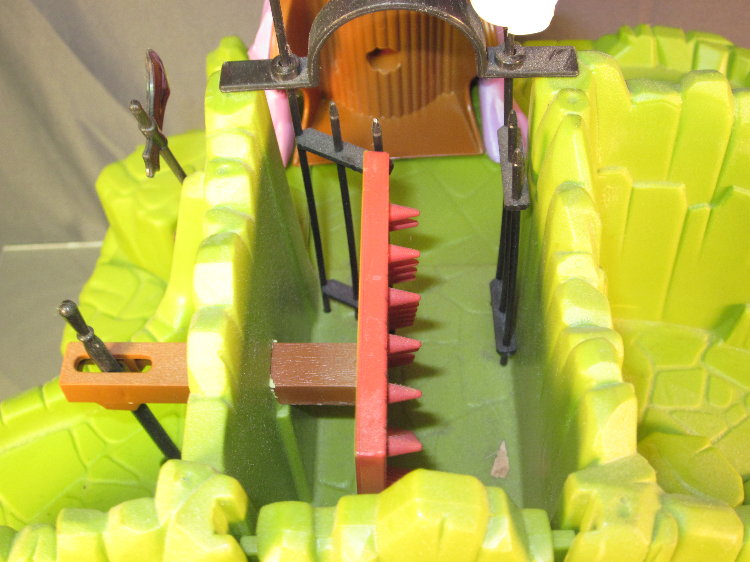 …and it’s all guarded by a giant purple winged beast! Like most great playsets of the 1980s, it seems massive, yet when you start populating it with action figures, you realize how small it actually is.

I found this at the Berlin Farmer’s Market during the summer of 2004 at the absolute last table I checked at the entire flea market. Amazingly, the playset was complete and did not have any noticeable playwear or other flaws, like sticker wear or discloration. When the seller told me it was $5, I just about fell over. Not only was this something I was looking for, but even back then, the price was ridiculously low. The seller still sets up in the same spot all these years later, yet I have never come close to finding something this good off of him since this one amazing find. In fact, he hasn’t really ever had any action figures for sale since he had this one item, which is probably why it was priced so inexpensively.

I luck out rather frequently finding old, rare toys at really good prices, but for some reason, this is one of those finds that I remember very vividly because it was just so unexpected. The best days at flea markets are when you spend very little and leave very happy, and so I think that’s why the Fortress of Fangs is so memorable. However, this playset is so cool that had I not made that score, I would have gladly paid much more for it.