As much as I’d like to say that I was a pretty decent artist as a kid, I was never able to master the art of pumpkin carving. From drawing the outline on the uneven surface of the pumpkin to the disgusting process of pulling out all the seeds to shoving a “safe” knife in and out of my outlines, my pumpkins were serviceable, but never on the level of award-winning. And this was long before you spoiled kids had all those fancy, shmancy patterns that you could just print out from the Internet.

If you were in my predicament, I’m sure you would have loved to have had a jack o’lantern that required no carving on your part, and once you bought it, you could put out every year and it would look great. And for years, various department stores have given us that option. You have to settle for lame, generic designs, but they get the job done.

But one artist in the 1980s said, “I can do better” (probably…I’ve never read an interview in which he actually said that). His name was Todd Masters, and he created a set of “carved” “pumpkins” that could be displayed year after year that have never, ever been rivaled. Masters’ background was as a Hollywood make-up artist, and if you decide to check out his IMDB profile, you can see that he’s had a long and varied career, working on everything from A Nightmare on Elm Street: The Dream Child to Tales from the Crypt to even recent films like The Twilight Saga: New Moon.

In 1987, a company called Pumpkin Productions produced Masters’ creation, a line of foam, sculpted pumpkins called “The Oh Lantern Family.” It was impossible not to notice these in Hallmark and other gift shops when they were brand new. They all had very expressive, charming, and sometimes, frightening and disgusting faces. They were the most lifelike jack o’lanterns you had ever seen, and they even came with their own story! 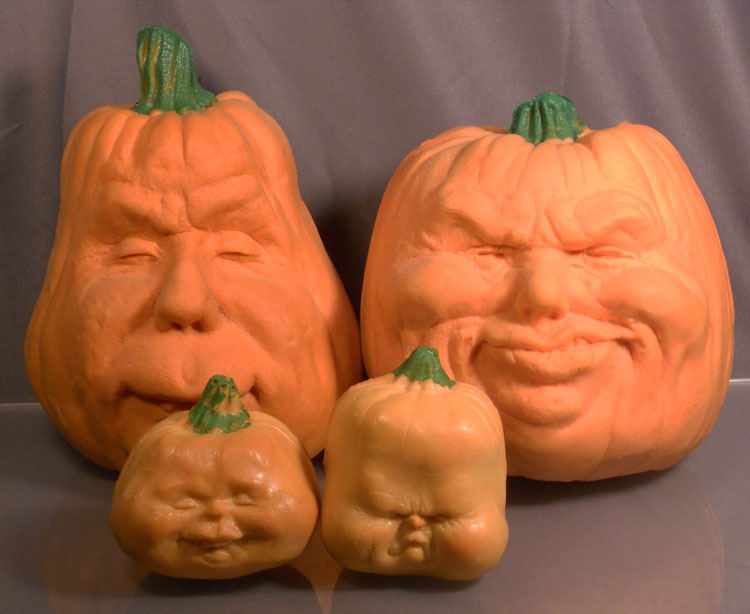 “Tucked away in the far corner of the ol’ field was a unique family of pumpkins, unique in that they were able to survive the harvest year after year, going unnoticed by the farmers. They would watch on as their friends and neighbors would pack up and leaf. They had heard through the vine again and again about something called ‘Halloween’ and finally their curiosity got the best of them. They finally got tired of their patch, stemming their desire to leaf the field themselves and to discover Halloween.” 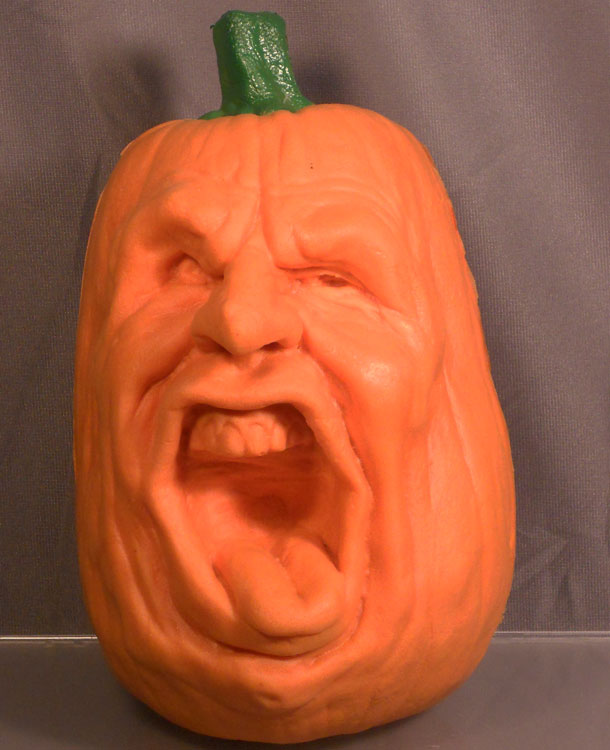 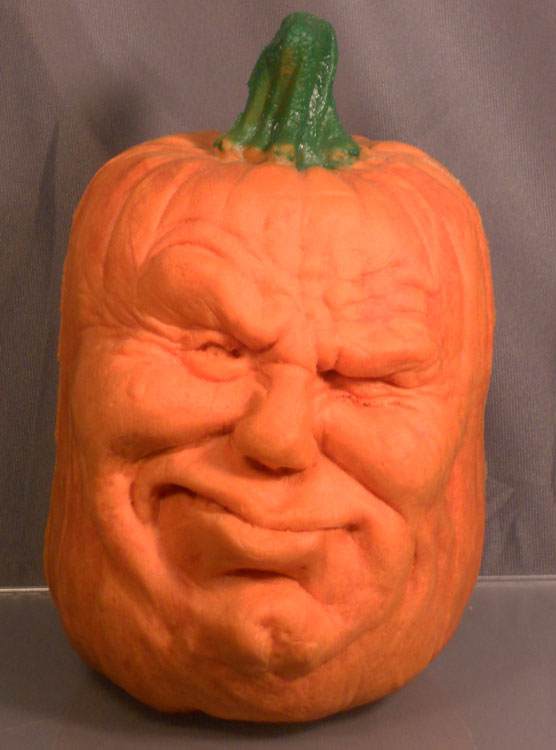 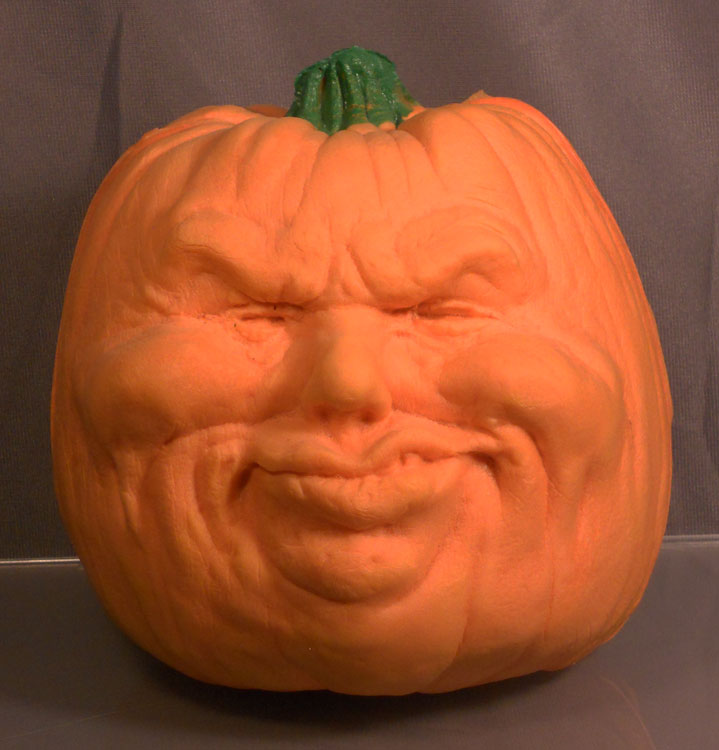 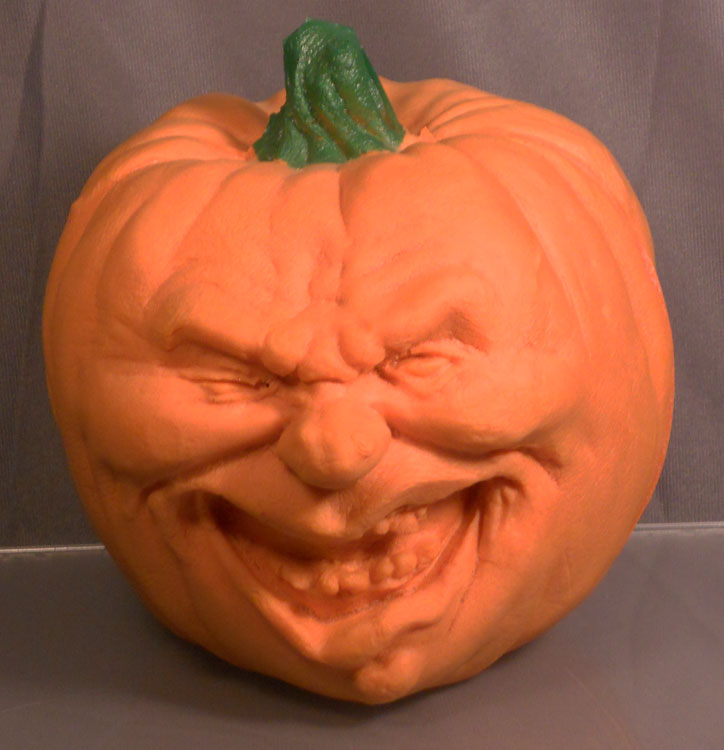 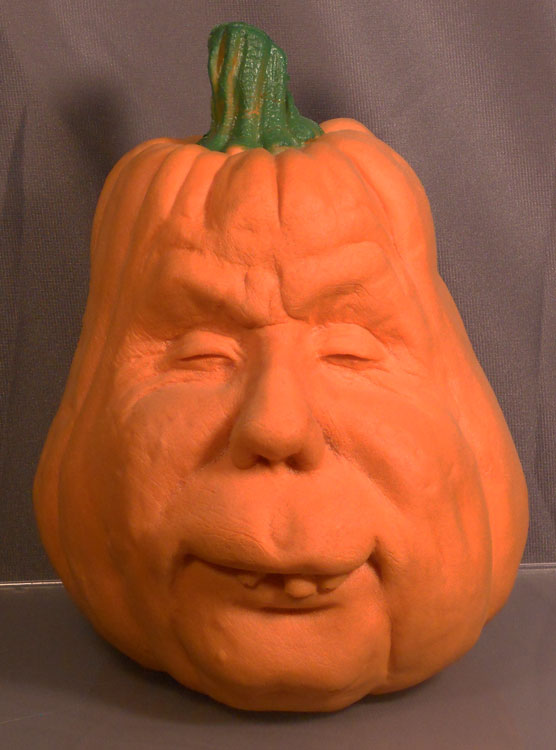 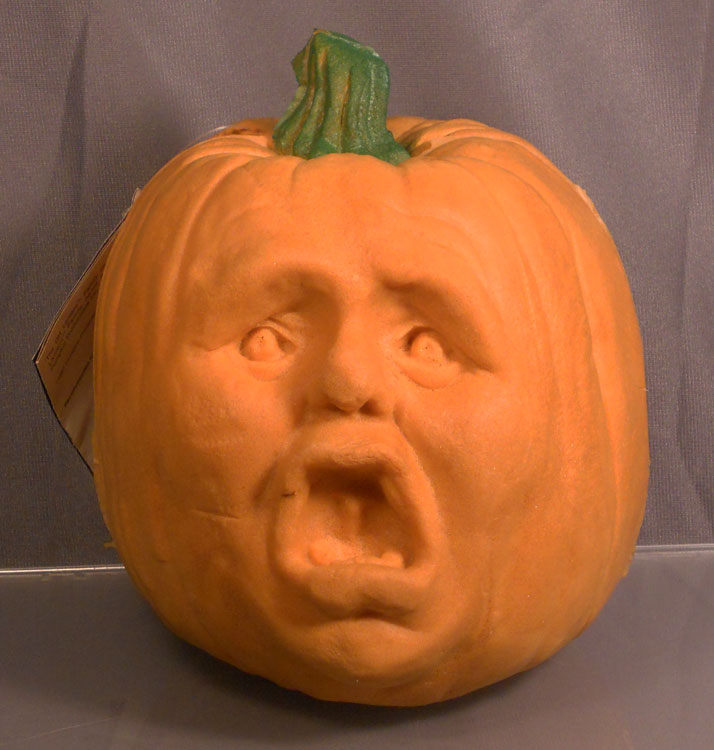 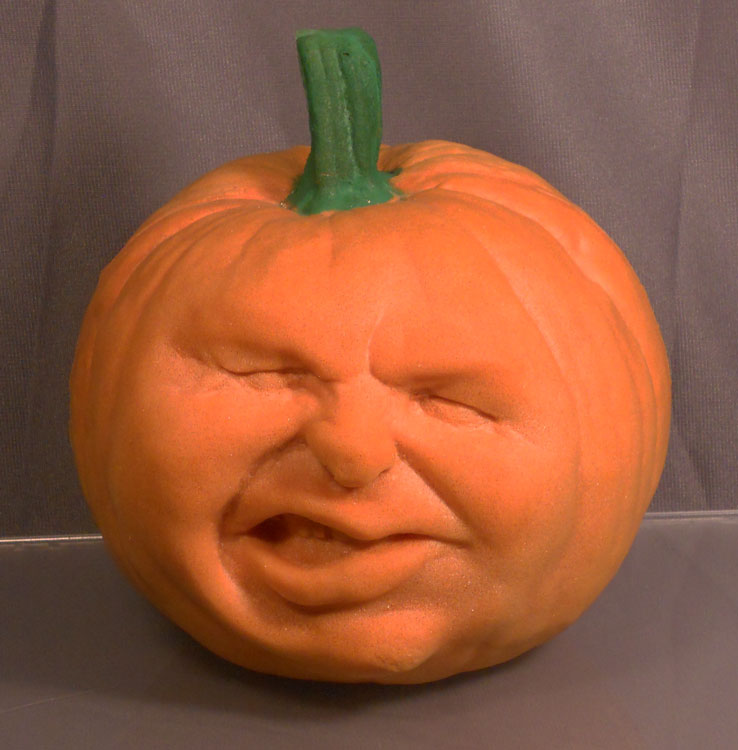 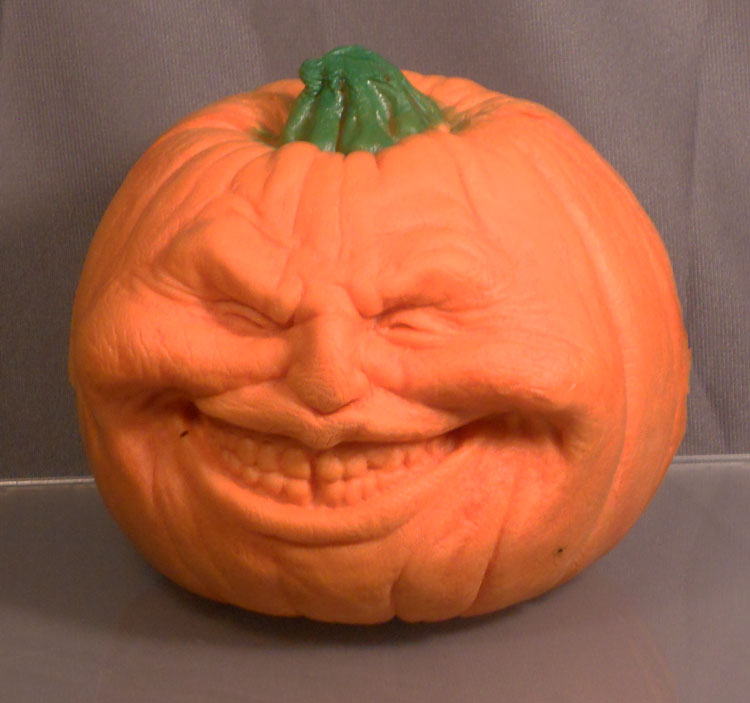 There were eight members of the Oh Lantern family initially: Jesse, Jody, Jesabell, Joey, Jack, James, Johnny, and Jock. Each one was roughly the size of an actual pumpkin. Each one had a tag that told you about when they were born and a little bit about their personality and how they were related to the rest of the family.

I was able to find a story written by Frank DeCaro (later of “The Daily Show” fame) in 1987 and published in The Chicago Tribune as they first achieved popularity. Apparently, they retailed for roughly $10 each, and even when churning out “20,000 members of the Oh Lantern family a day,” they still had a tough time meeting demand. Stores were selling out within days. 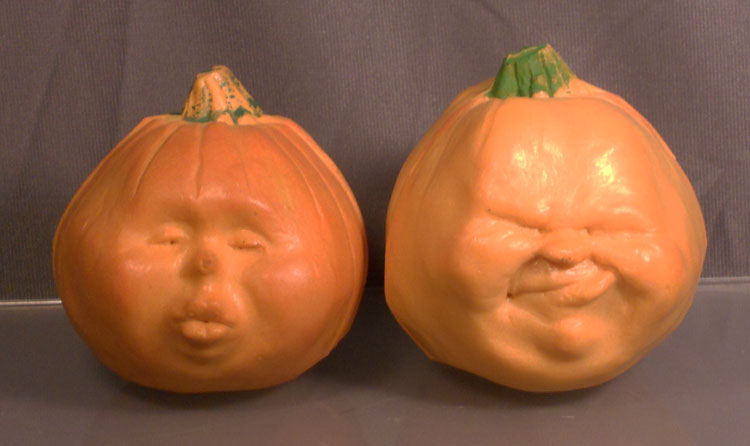 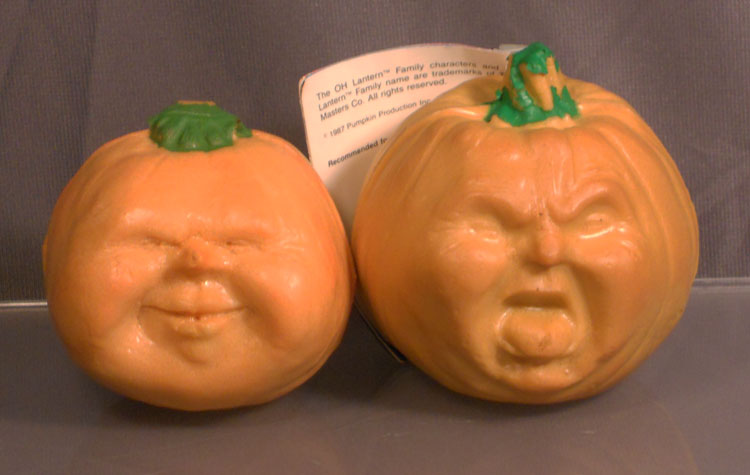 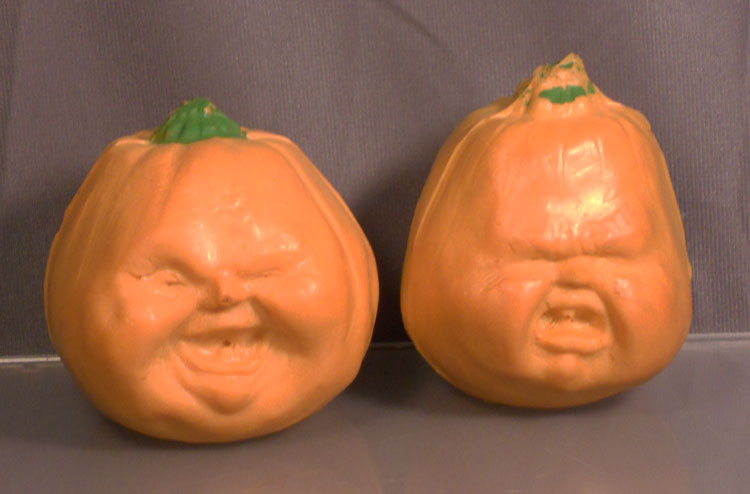 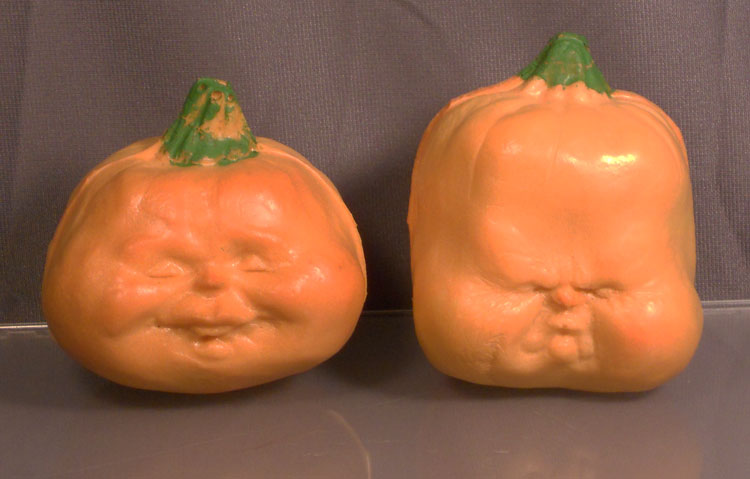 The popularity of the Oh Lantern family was so great that eight new additions to the family were later available. These were Baby Oh Lanterns: Jason, Jimmy, Josh, Jack Jr., Jamie, Julie, Jennifer, and Judy. These weren’t quite as grotesque as the “adults” of the line, but while a few of them were cute, many of them were making upset baby faces. It gave the feel of authenticity. 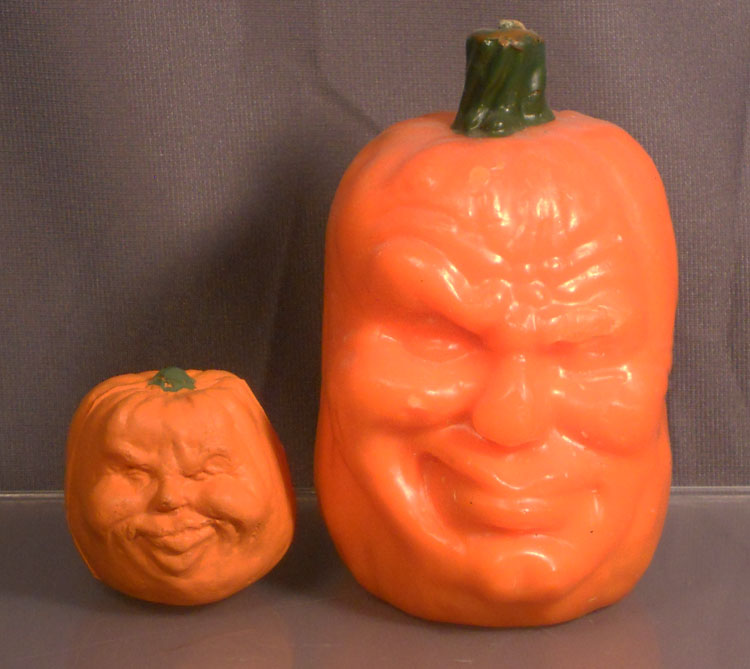 The pamphlet that came with the babies advertises a newsletter, and I’d be curious to see if more than one issue was ever published.

As popular as the Oh Lantern family was in 1987 and probably 1988, they didn’t last. My guess is that sales were really great in September and October and rather stagnant the rest of the year. Like Homer Simpson learned, pumpkins do not make for a great year-round investment. The thing about this fad is that while the Oh Lantern family may have gone away from retail stores, Halloween NEVER goes away. It rears its ugly head each year, and it seems like it’s even more popular to go crazy decorating for the holiday now than it was even 25 years ago.

I am VERY fortunate that my parents purchased the entire Oh Lantern family when they were brand new. While the article mentions Hallmark stores, my parents said they bought the majority of their collection at Spencer Gifts (back when the store was awesome). I vividly remember them on display around the kitchen in our first house around Halloween. I was only four years old when these were first available, so I really don’t remember a Halloween without them. I was dressed up as a pirate that year. Yup, the Oh Lantern family and my pirate costume are about all that I can recall of Halloween 1987.

We moved to my parents’ current house in 1995. Even though my parents prefer their antique and truly vintage Halloween collection, these were deemed cool enough to keep and survived the move. They hadn’t been on display in several years until my sister and I decided to go through our old Halloween decorations and determine what should be preserved and what should be sold. That’s when we rediscovered the Oh Lantern family.

For a line of decorations that had such enormous sales, it’s amazing that they are as hard to find today as they are. They are made of foam rubber, so if not stored properly, these will definitely not last. We always displayed them indoors, so I think that helped. The market is pretty strong for anything related to the Oh Lantern family. Clearly, with sales as strong as they were, a lot of people who were alive in the 1980s must remember these, and it’s clear that many of them are nostalgic for these amazing decorations. It looks like if you have one in really nice shape with its original tag, you’re looking at between $75 and $125 if eBay prices are to be believed. Condition is everything though. A missing stem or deteriorated foam basically kills all of the value.

That is for the regular series. I can tell you that the babies are ABSURDLY hard to find, and in fact, I believe our website is the first to publish a picture of the complete set of eight.

While my family definitely treasures the vintage and antique Halloween collection my parents have put together over the years, the Oh Lantern family is one piece of nostalgia from my childhood that I am always happy to see reappear this time of year.

PLEASE NOTE: Since we’re trying to put together a definitive guide to The Oh Lantern Family, any information you have on the line that is not detailed here would be greatly appreciated! 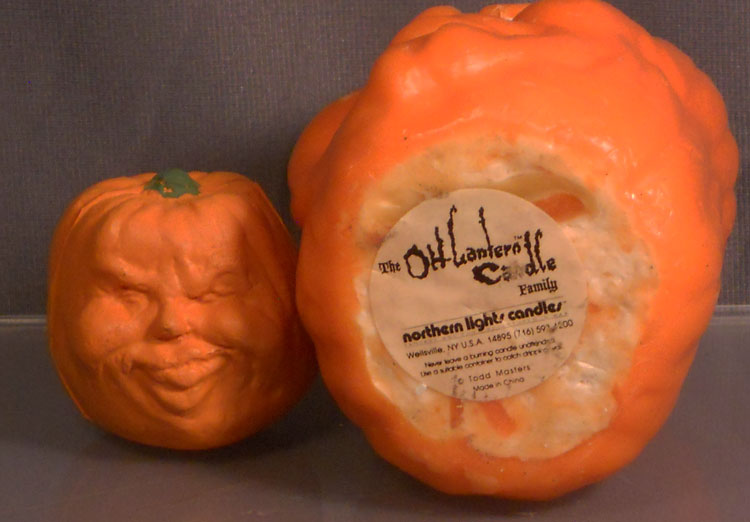 A Note from Amy:

I could have sworn that somewhere we had pictures of Ben and I as little kids posing with the Oh Lanterns.  Well, if we do I couldn’t find them… but I did find some 1987 and 1988 photos in our personal collection of our Oh Lanterns! 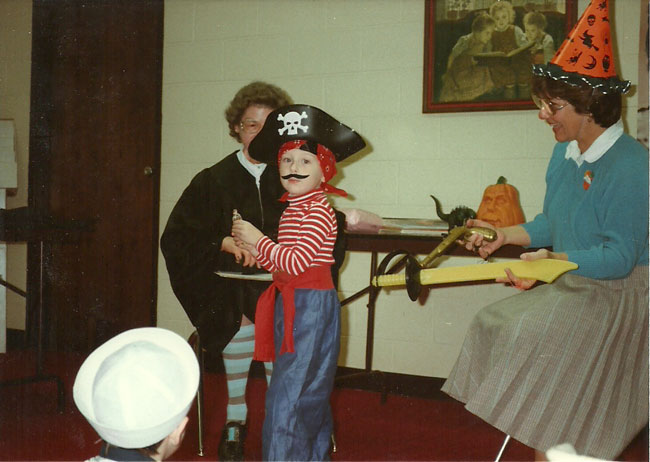 Remember Ben saying that all he remembered about the Halloween of 1987 was being a pirate and Oh Lanterns?  Well, here is little Ben as a pirate at his nursery school Halloween party.  In the background on the table next to an awesome Godzilla figure is Jock Oh Lantern! 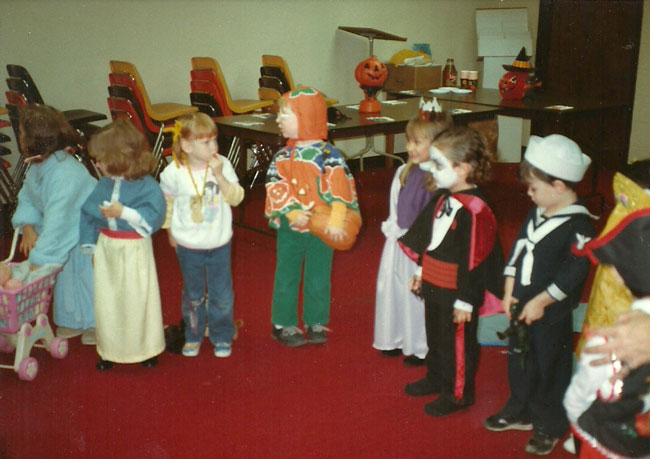 It might be a bit hard to see, but the pumpkin kid in the middle there is holding Jock Oh Lantern (by the stem I might add.  Oh the humanity!)  I think my mom must have decided to use him for a party game with the kids.  After this abuse it is amazing that he is still in great shape today. 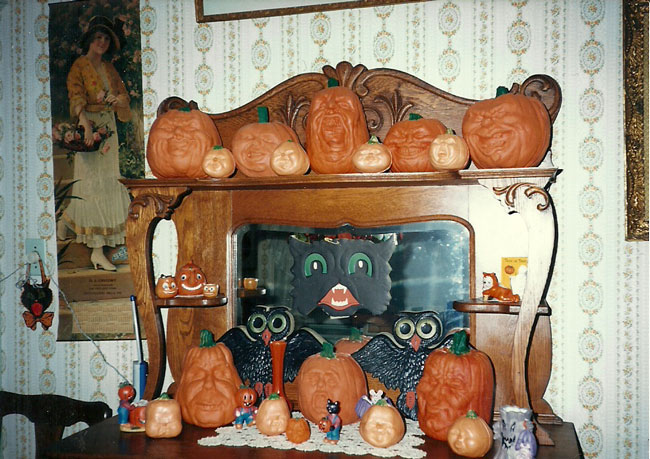 Like Ben, I always remember the Oh Lanterns being on display in the kitchen, but in 1988 they were in the dining room. 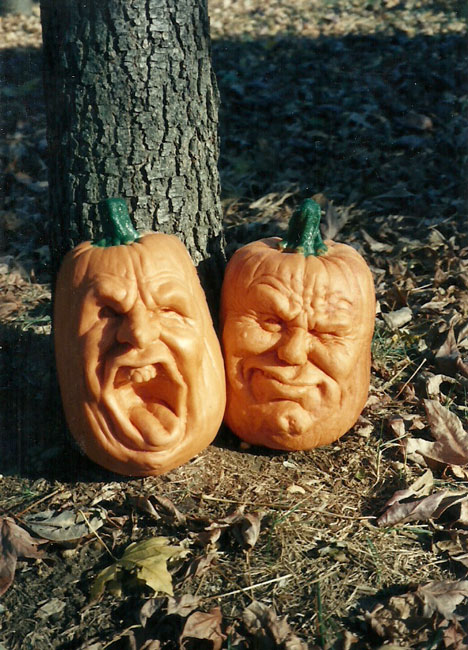 My mom liked the Oh Lanterns so much that she took them out to the back yard and photographed them in 1988.  Here is one picture.  By now I am pretty sure my family looks Oh Lantern obsessed, but I don’t care.  There are a lot of happy childhood memories from these things, and they are just so cool looking!