Last Travel-Log from the Road – 10/4/12: Antique Archeology-Nashville Submitted by Carol

When we set out on our cross-country journey at the beginning of September, we knew we wanted to antique our way across America, but we weren’t exactly sure where we would go.  We still have a few more days on the road, but I feel fairly certain that I won’t be summarizing those last days until we get back to New Jersey.  Tonight, we’re in Dolly Parton’s hometown, Sevierville, TN.  Earlier in the day, we passed by Nashville on Interstate 40, so we had to make a little detour and visit Mike Wolfe’s newest shop, Antique Archeology-Nashville.  It seems sort of fitting that we bookended our trip with visits to the two American Pickers stores.

I really liked the Nashville store.  First of all, it’s in a great old brick factory building, the Marathon Motor Works. 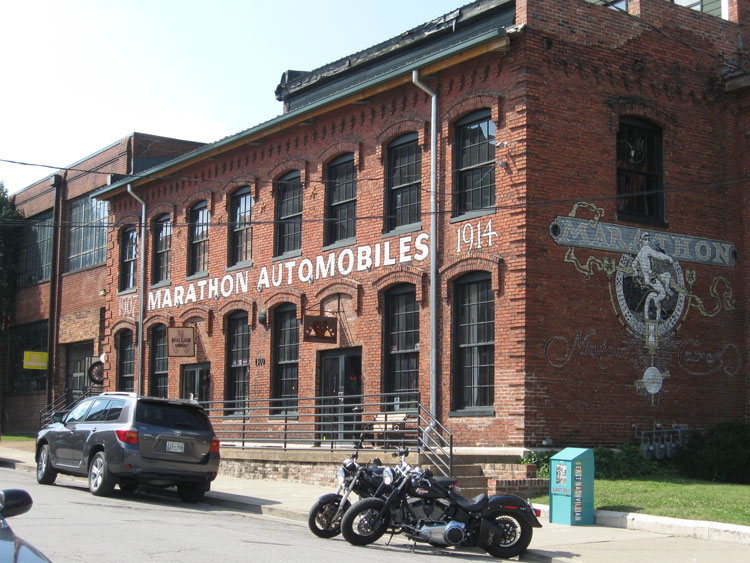 We were heading into Nashville on I-40 from west to east, and our GPS took us through the city, past Fisk University, for quite a few blocks.  Getting back on I-40 was very easy.  The whole Marathon Motors complex looks like something being re-purposed into a trendy shopping area.  Next to the Pickers’ store, for instance, is a candy store.

Unlike the Iowa store, which had an intimate feel to it, the Nashville store is quite a bit larger.  I’d say it has close to three times the square footage.  If nothing else, it has very high ceilings.  Whoever arranged the stock did a great job.  It was almost like walking around through a really cool museum of wacky retro stuff.  (And, since the prices were astronomically high, just like in the Iowa store, we knew we couldn’t afford anything, so it WAS like visiting a museum.)  This is the view when you first walk into the store. 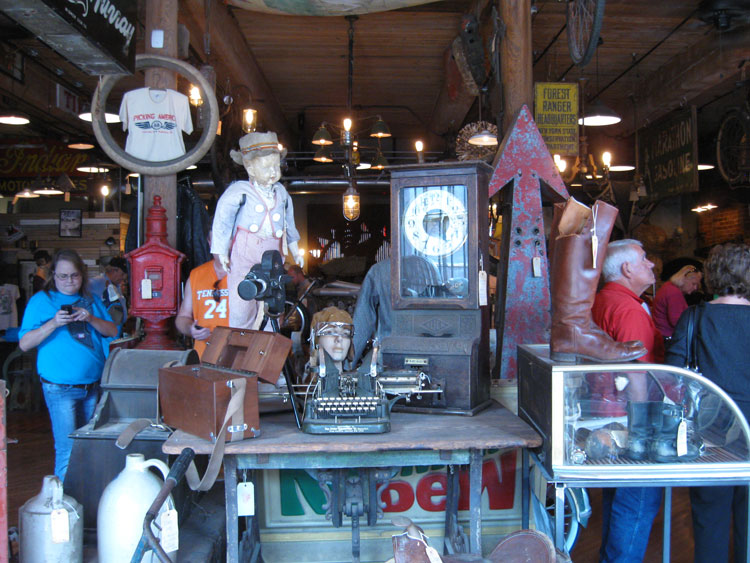 One of the recognizable things was the huge Piggly Wiggly head. 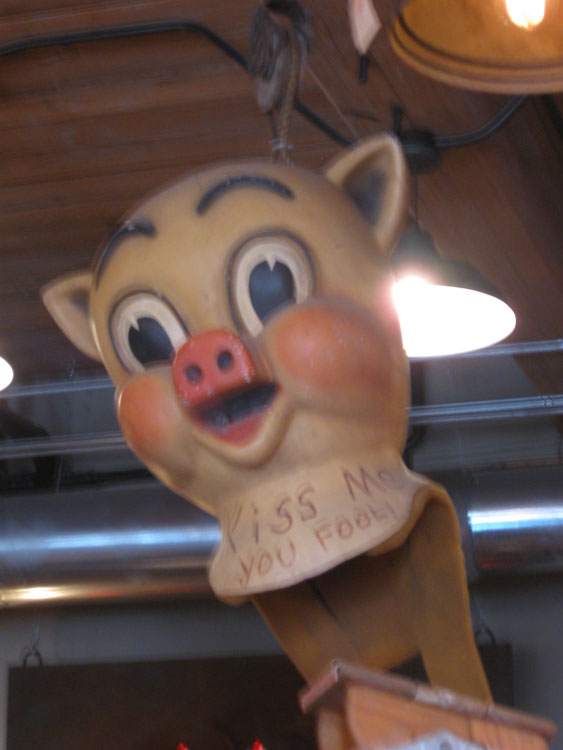 There was a fabulous canvas circus sideshow sign up on the ceiling.  Who wouldn’t pay money to see a pig with an elephant’s trunk? 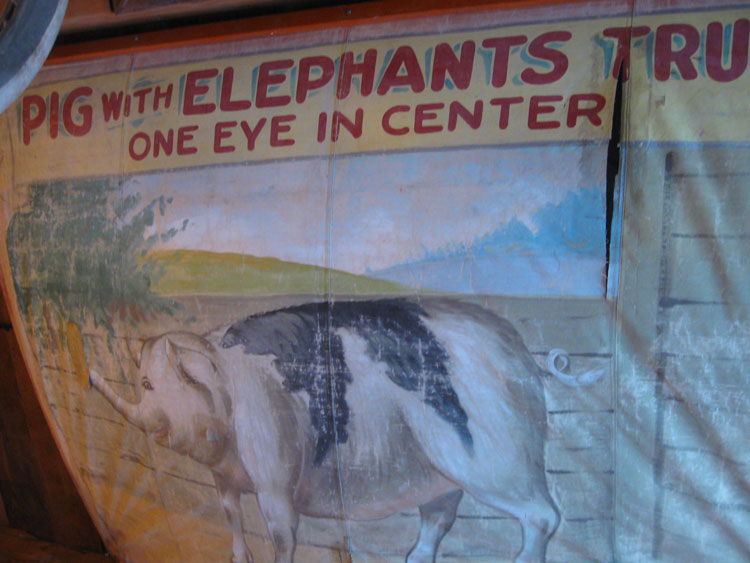 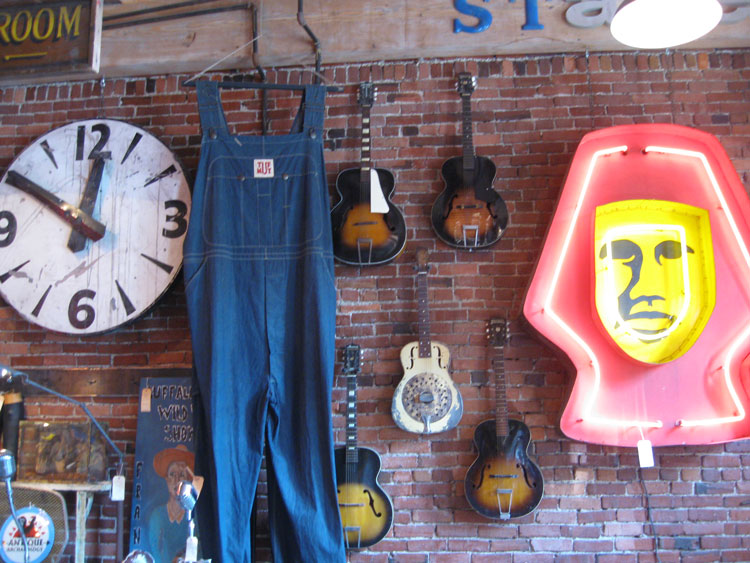 As we did in the Iowa store, we searched for something small and affordable.  It was tough.  They had a lot of 1990’s music trade magazines that were supposedly picked from Mickey Gilley.  Priced at $5, they fit the bill.  We also found a wire basket with a handful of paper items in it for $5 each.  There was an ad for the Chile pavilion at the 1901 Pan American Exposition in Buffalo.  (That’s the same exposition where William McKinley was shot by an assassin.)  Five dollars didn’t seem too outrageous at all.  Those were our “old” finds.

As with the Iowa store, there were plenty of t-shirts, hats, magnets, shot glasses, metal signs, paper fans, playing cards, etc., etc. for sale.  (I particularly liked the baby onesie that said, “Future Picker” on it.)   I’m sure sales of those items are the main source of revenue for the store.  There definitely were a lot of shoppers – or at least “lookers” – at this shop.  There were two counters for sales, one to the front left side of the store and one in the back, staffed by pleasant young people who looked like they could be college students.  Based on what the young man who waited on me said, it sounds like Mike shows up about once a month at the store.

We’re glad we’ve seen both of the American Pickers’ shops.  If you’re a fan of the show and ever get to LeClaire, Iowa or Nashville, Tennessee, do stop in.  Then, when you watch the shows, you’ll have a reference point when they show interior/exterior shots.  Believe me, things never look the same in person as what you imagined. 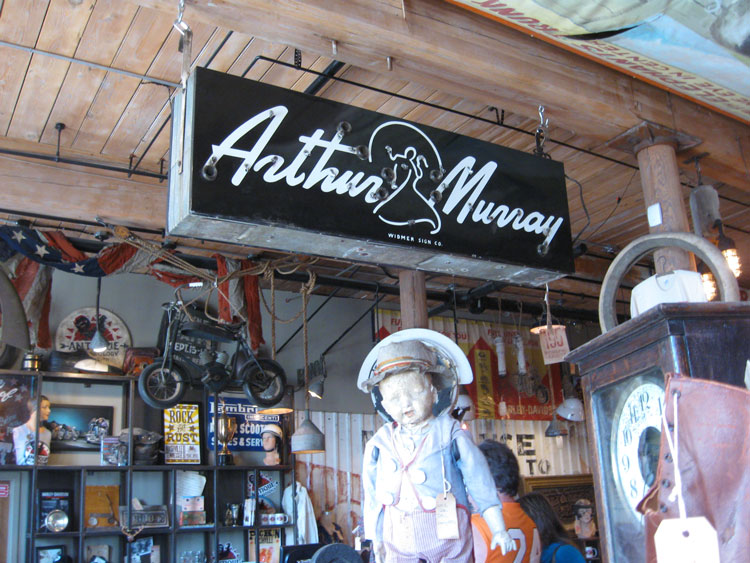