We entered LeClaire, Iowa, which is just north of Interstate 80 and on the banks of the Mississippi River, at about 9:45 a.m.  I was taking note of the price of gas at a BP station when Jim shouted, “There they are!”  I thought he meant that he had seen Mike and Frank, the American Pickers, out and about in their van.  Actually, he had spotted Antique Archeology, which sits uphill just behind the BP station.

There was the familiar 1950 Nash out front.  And there was the shop itself.  Ten minutes before opening, the small parking area was already filling up with fans of the show like us.  Most were out-of-staters, and most were at least middle-aged. 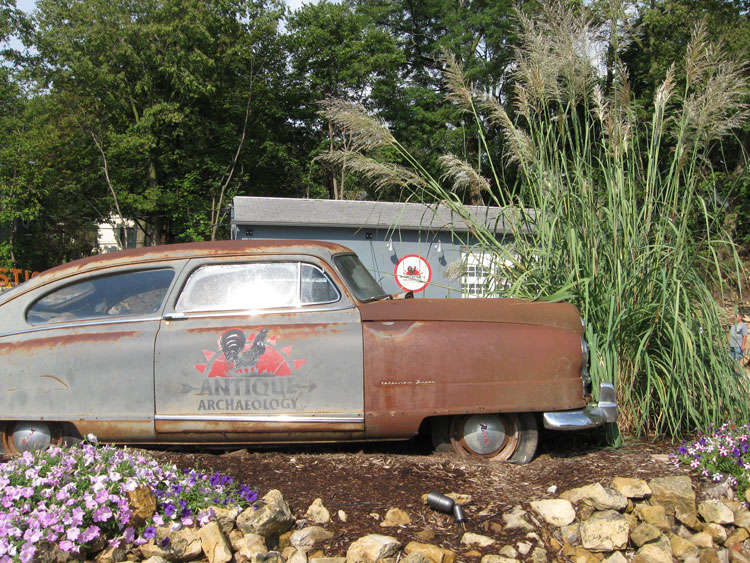 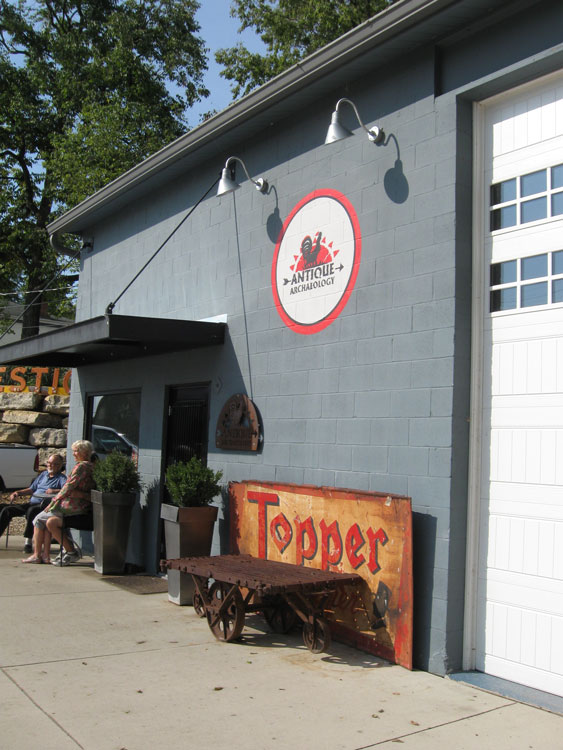 Suddenly, the “closed” sign was turned around and said, “open.”  Then the garage door opened and a young female employee (No, not Danielle.  Apparently she only works after hours.)  wheeled out the familiar little electric car.  I was busy snapping pictures, but Jim was already inside the shop.  It’s divided into two sections.  The original office portion of the old garage is where they sell all sorts of souvenirs:  caps and t-shirts, shot glasses, tote bags, banks, magnets, etc.  Were they reasonably priced?  No.  A basic postcard of Mike cost $3.  T-shirts averaged about $22.  Did we leave with some items?  Of course.

The work area of the garage is where the antiques are sold.  Did we recognize items that were picked on the show?  Yes, we did.  Were they expensive?  Yes, they were.  Do not expect bargains at Antique Archeology.  Remember the huge pile of moon landing souvenir felt pennants that were picked a couple of seasons ago?  You could buy one for $40.  Remember the toy metal police cars that were picked earlier this season?  Several were out for sale at $100 each.  Some items in this area were very familiar but were marked “not for sale.”  High up on a shelf were those goofy Laurel and Hardy heads that Mike and Frank wore a season or two ago, but no one was taking them home. 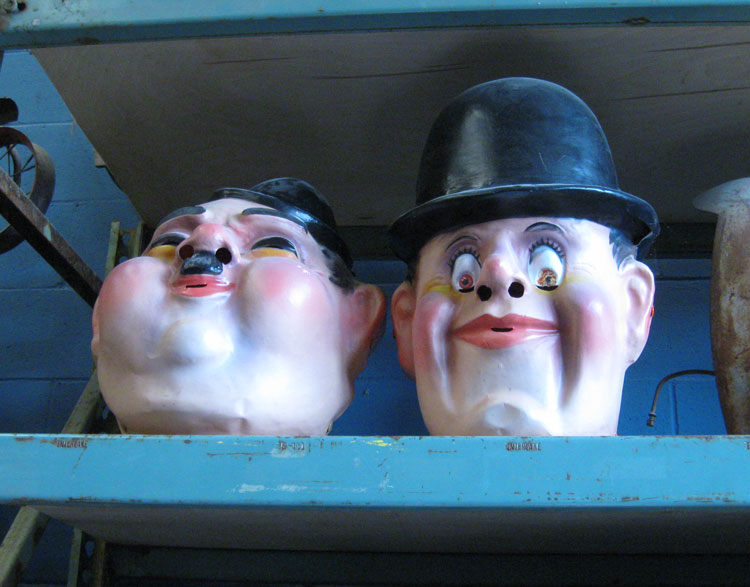 We did, however, find one little thing to purchase.  In a basket were a few dozen small metal license plates that had been cereal premiums in the 1950’s.  They were priced at $10 each.  We knew this was a little more than they were worth, but they were in good condition.  And they were small, which is a prerequisite for almost everything we purchase on this trip.  We had hoped to find an Iowa plate, but, alas, had to settle for our home state of New Jersey. 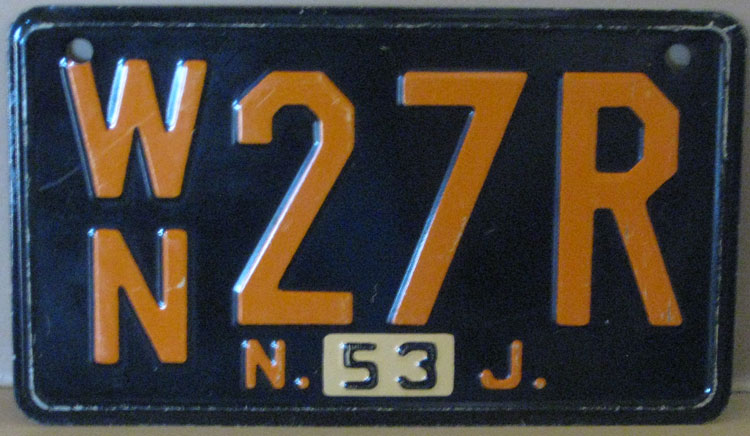 While we didn’t score any bargains at Antique Archeology, we didn’t expect to.  We scored an experience.  American Pickers has become a cultural icon; even people who never go out hunting for antiques love this show.  We appreciate what Mike and Frank have done for antique collecting.  More and more people, especially younger people, are discovering the fun of “the hunt” thanks to them.  Frankly, I don’t blame them for cashing in on their fame while they can.  If you’re ever in LeClaire, Iowa, be sure to check out their shop.

That said, make sure you don’t leave town without checking out some of the other shops, too.  We would especially recommend the Big River Antique Mall at 423 N. Cody Road on the other end of town. 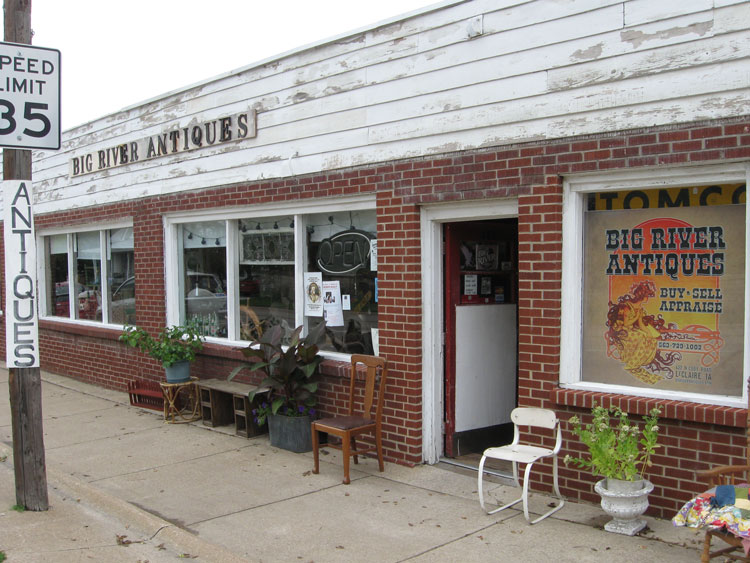 This antique mall contained some really fabulous stuff, particularly when it came to antique advertising items.  They were pricey, to be sure, but the quality was outstanding.  There were plenty of moderately-priced items as well.  We left the shop with two items that we liked a lot and that we felt were reasonable in cost.

The first was an adorable bobble-head clown.  He’s in excellent condition and was marked “Japan” on the bottom, so he probably dates to the 1950’s.  And he only cost $18.

The other item we purchased was a cardboard sign that advertised the Marx Brothers movie, Animal Crackers, which would date it to the 1930’s.  It would have been used on a bus or trolley.  Most of these signs would have been tossed out shortly after use.  This one, while not in perfect condition, seemed like an excellent buy at $16, and it’s small enough that we might actually be able to find a place to display it when we get home.