I’m a huge Thundercats fan now, but as a kid, I was only really familiar with some of the toys and had only a passing knowledge of the cartoon. It wasn’t until Cartoon Network’s Toonami started rerunning old episodes in the early 2000s when I was in high school before I gained the “sight beyond sight” needed to appreciate one of the wildest toy properties of the 1980s.

Chances are, if you’ve stumbled upon this article, you are already pretty well-versed in Thundercats lore, but for the uninitiated, Thundercats was a cartoon that aired in the early 1980s. This was at a time when there was a renewed interest in the fantasy genre thanks to the success of He-Man and the Masters of the Universe and Dungeons and Dragons. The cartoon followed the escapades of the titular Thundercats and their quest to rebuild their civilization on a planet called Third Earth after their planet was destroyed. Unfortunately, they run into the evil entity known as Mumm-Ra, who recruits a team of mutants to thwart the Thundercats’ plans and help him obtain the Eye of Thundera, an especially powerful ancient stone that serves as the source of power for Lion-O, the lord of the Thundercats.

While Thundercats debuted at a time when toy companies made toys that television studios then turned into cartoons, Thundercats was the opposite. Work began on the cartoon as early as 1982, and the toy line, which was made by LJN, was released concurrently alongside the show in 1985. The cartoon actually lasted longer than the toy line did, with the last new episodes airing in 1989, about two years after new toys were being made.

Thundercats has one of the most dedicated fan and collector communities of any 1980s toy line. It’s a much smaller line to collect than other big 1980s franchises like Masters Of The Universe or Transformers, but that means there are fewer toys to collect for the legion of fans who want to keep the memory of the Thundercats alive. While Thundercats toys were quite popular and many of the figures are relatively easy to find, several of the toys released late in the line’s lifespan were produced in extremely small numbers. As such, there are simply not enough examples around to fill the demand, and when that happens, the prices soar.

I’ve been collecting Thundercats in earnest since my high school days when I would watch Thundercats reruns after school on the aforementioned Toonami block, and a few years ago, I had a streak where I managed to find a lot of key pieces for my collection in a relatively short period of time. Pieces like the spectacular Cat’s Lair playset, a Thundertank with the original rubber treads, the Sword of Omens role play toy that was still in working condition with the battery cover intact, and rare late figures like Jaga, Ben-Gali, and Lynx-O all found their way into my collection somewhere between 2006 and 2008.

Unfortunately, as difficult as those pieces are to obtain, I still have many gaps in my collection. I can never seem to find a nice loose example of the Astral Moat Monster at toy shows or flea markets (I see them boxed all the time, though). I have Driller, but finding a loose Stinger with the wings intact is a challenge. And I don’t think I’ve ever come across the Tongue-A-Saurus monster in person. However, I did find one of the holy grails of Thundercats collectibles recently. 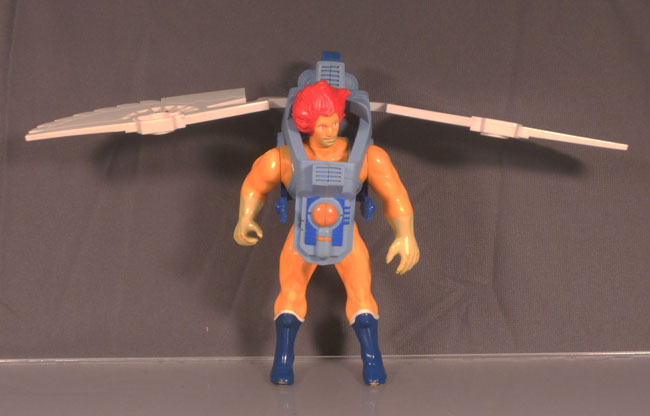 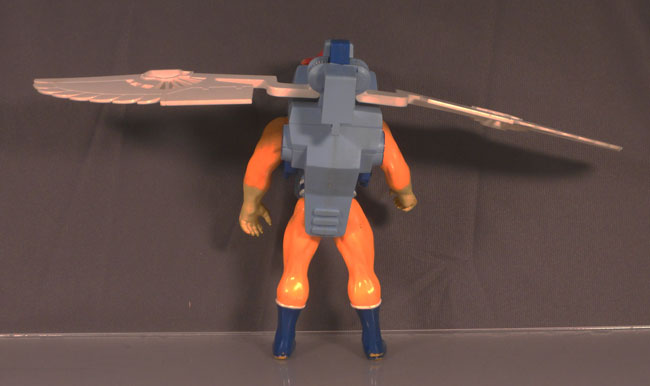 To the naked eye, this appears to be just a plain old Lion-O figure with some wings slapped onto him. Now, the wings themselves are not too easy to find. They are called the Thunder Wings, an accessory set that was made available in 1987, the last year new toys for Thundercats were introduced. They could be placed on pretty much any Thundercats figure (except for some of the Berserkers, obviously). They’re not too easy to find, but since they’re just a pair of wings, collectors don’t go too crazy for them.

However, in order to squeeze just a few extra bucks out of kids in the 1980s, LJN decided to repackage Lion-O with these wings and creatively call him “Thunder Wings Lion-O.” They did the same thing with Mumm-Ra with another accessory set, and they called him “Luna Lasher Mumm-Ra.” If you’ve ever seen the episode of “The Simpsons” where they stick a hat on a Malibu Stacy doll in an effort to convince kids to buy a supposedly “new” toy, this is essentially the same thing. 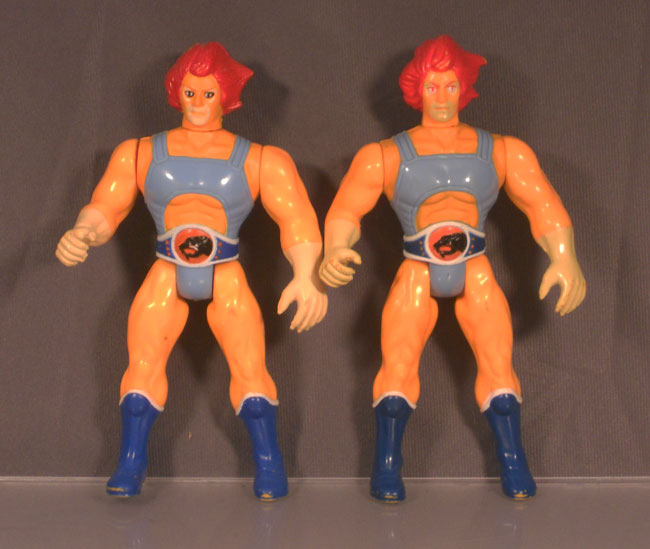 In creating these cheap cash grabs, though, they decided to cheapen the figures themselves. Lion-O and Mumm-Ra were somewhat deluxe in that not only did they have the Battle-Matic lever found on many LJN action figures of the era, but they also had battery slots on their backs. Stick a battery on their back, and their eyes would light up. This was a nifty little feature that set these two key figures apart from the rest of the line. In creating Thunder Wings Lion-O and Luna Lasher Mumm-Ra figures, LJN decided to keep the price point down by eliminating all of those features. However, by doing so, they created two of the rarest and most desirable action figure variations of the 1980s. 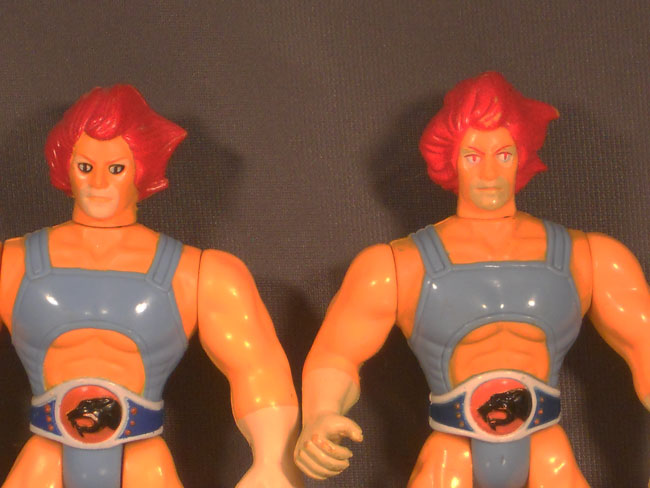 On the left is a basic Lion-O action figure with light up eyes.  The figure on the right is the much less deluxe Thunder Wings Lion-O with painted eyes. 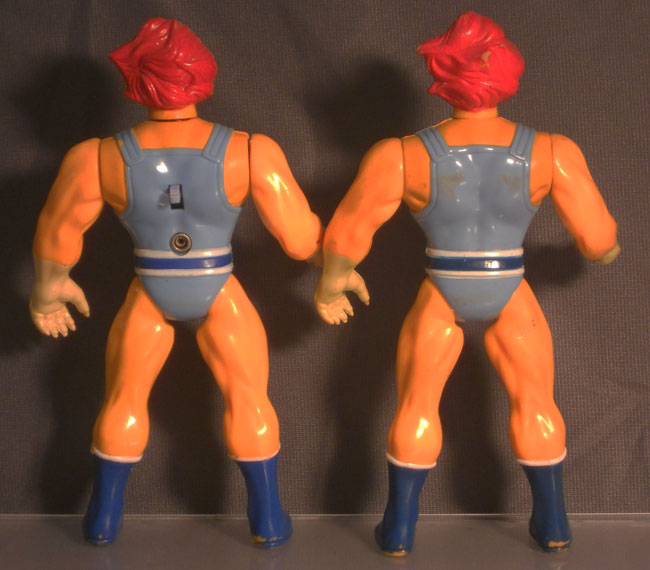 The left hand Lion-O is the basic figure with Battle-Matic lever and a battery slot to make his eyes glow.  The Thunder Wings Lion-O has neither of these features.

All of the factors that help determine the rarity of a particular action figure apply here. These were essentially the last two Thundercats action figures released. Since the line was on its last legs already, they didn’t sell too well, so not a lot of kids owned them originally. Likewise, Thundercats figures were being produced in far less quantities to begin with. And chances are, even if you liked Thundercats in 1987, you could easily find a Lion-O or Mumm-Ra figure still on shelves. And why would you want these figures if they didn’t have the awesome light-up feature? As such, these figures remained very obscure and nearly forgotten until interest was rejuvenated in the early 2000s.

Collectors are diligent when it comes to variations, and Thundercats collectors know that if Lion-O is missing the lever and the battery slot on his back and his eyes do not have the light-up feature, then it’s definitely one of these rare figures, since Lion-O was never released this way otherwise. Because the wings are rare but not too difficult to obtain, many collectors scour flea markets, hoping to find this subtle variation in among a bin of old childhood toys and prey on an unsuspecting seller. I know I would have loved to have found one that way!

However, because of the absurd rarity of this piece, it’s very difficult to determine prices even if you have one. As more collectors have become aware of this piece, more examples have surfaced, and so they don’t bring the absolutely nutty prices they brought about 8-10 years ago, when carded pieces would easily soar over $1,000 and loose examples would easily sell for $300-$500, depending on condition. But I always try and get a deal if possible. I managed to get this at a collectible toy store for $70. I was initially hesitant because I figured they had probably stuck the wings on a regular ol’ Lion-O to drive up the price, but that wasn’t the case. The only other time I’ve seen an example for sale in person was at Toy Tokyo in New York City at some point when I was in graduate school and I could check the store on a near-weekly basis. I know I couldn’t afford it then and I doubt I could afford it now. $70 was in a price range that I was thrilled with, and this brings me just a little bit closer to a complete LJN Thundercats collection.