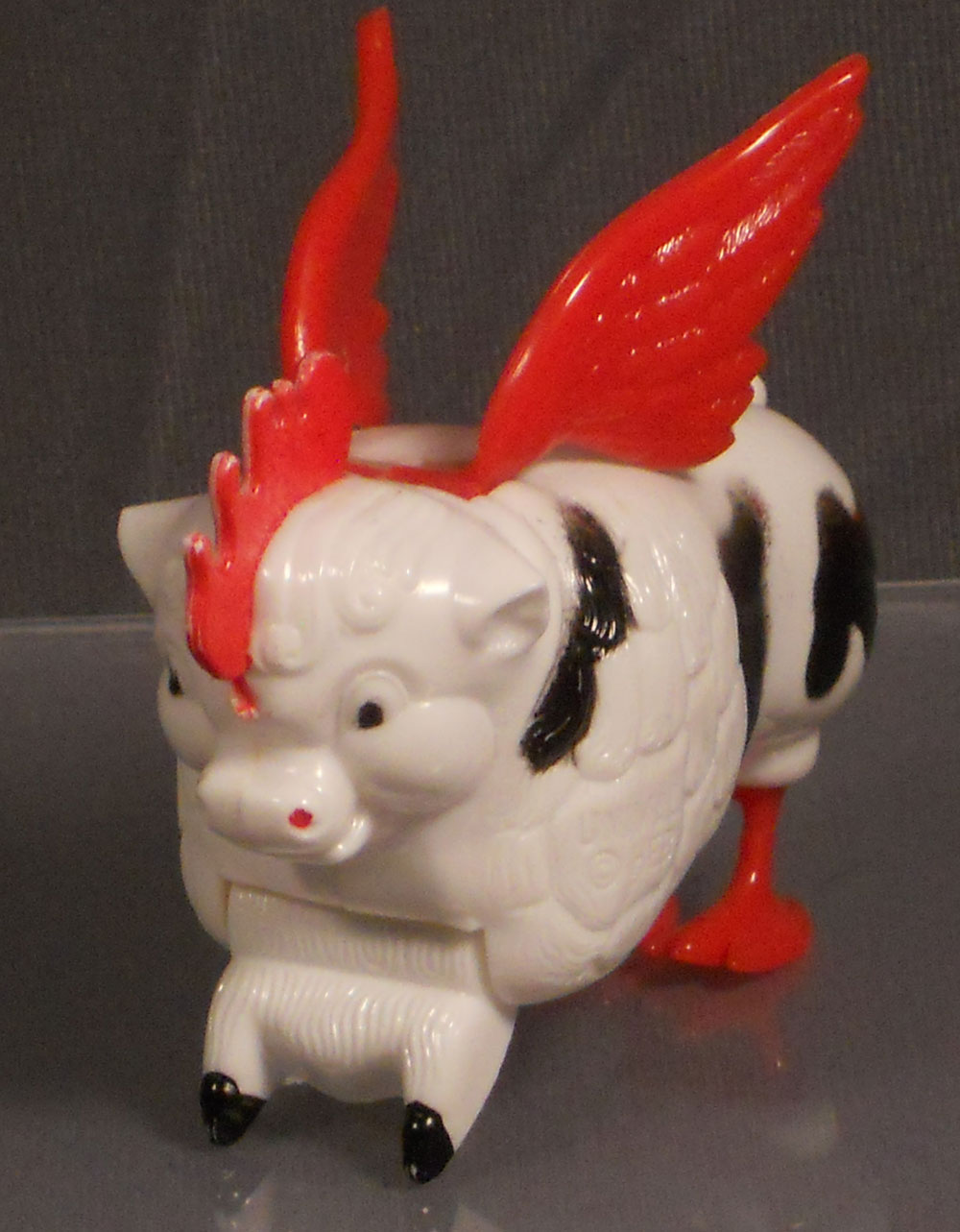 When I found my Unimal about 8 months ago, I thought I was just buying a wacky hybrid farm animal.  Turns out the Unimal, which is 1/5 cow, 1/5 steer, 1/5 chicken, 1/5 pig, and 1/5 sheep has a rich history involving one man’s passion for livestock agriculture and his desire to educate America’s youth about it in a very fascinating way. 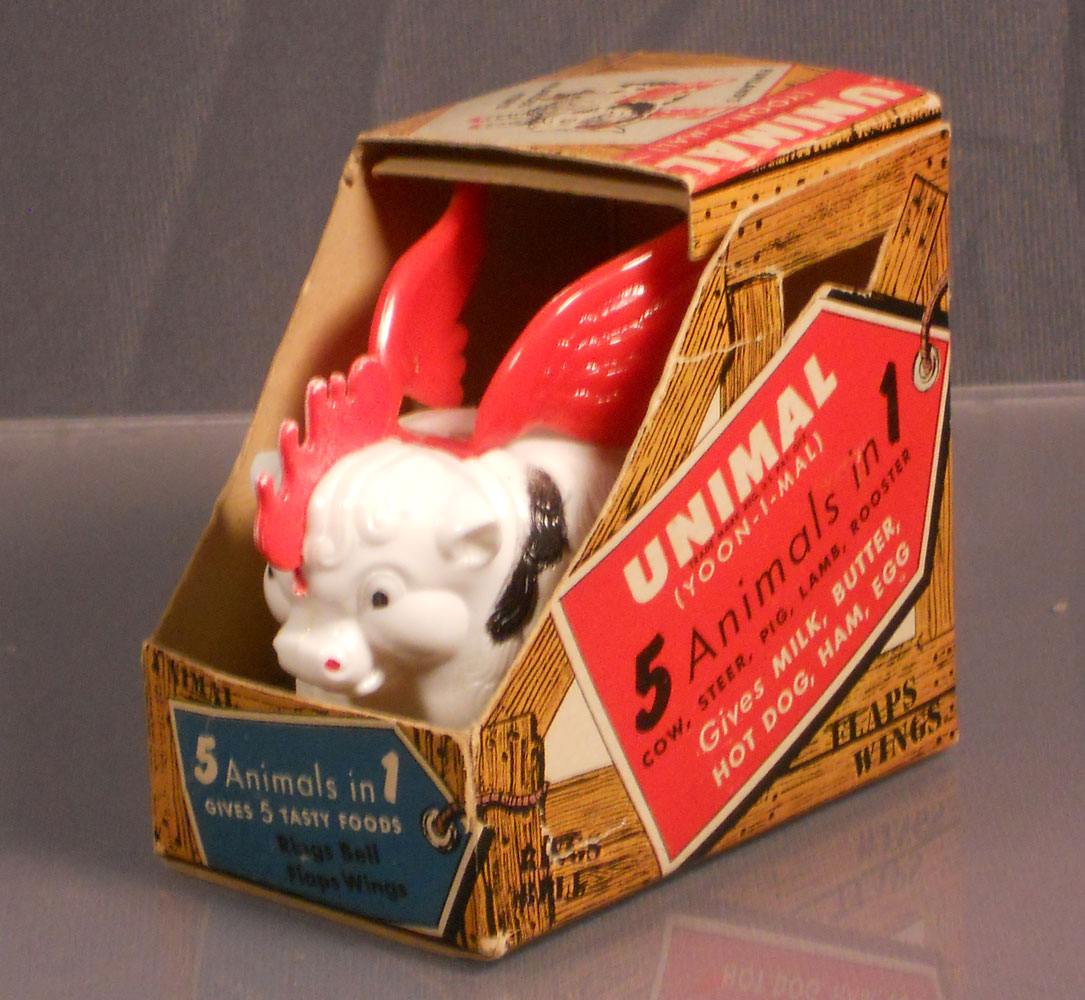 The Unimal was created by Cornell Professor Howard E. Babcock (1889-1950).  When I say Cornell, I am totally talking about the Ivy League University in Ithaca, New York.  It was there that Babcock taught agriculture and life science.  Babcock wanted to create a toy to teach children about livestock and the major impact it had on their diet.  Enter the Unimal.  The toy was created in 1950, and a larger plaster model was also created and shown at Farm and Home Week expositions. You can learn more about the Unimal here, at the Cornell Library website.  The Unimal is also featured in a documentary called “Farmboy”, and there are clips about the Unimal from the movie on Youtube. 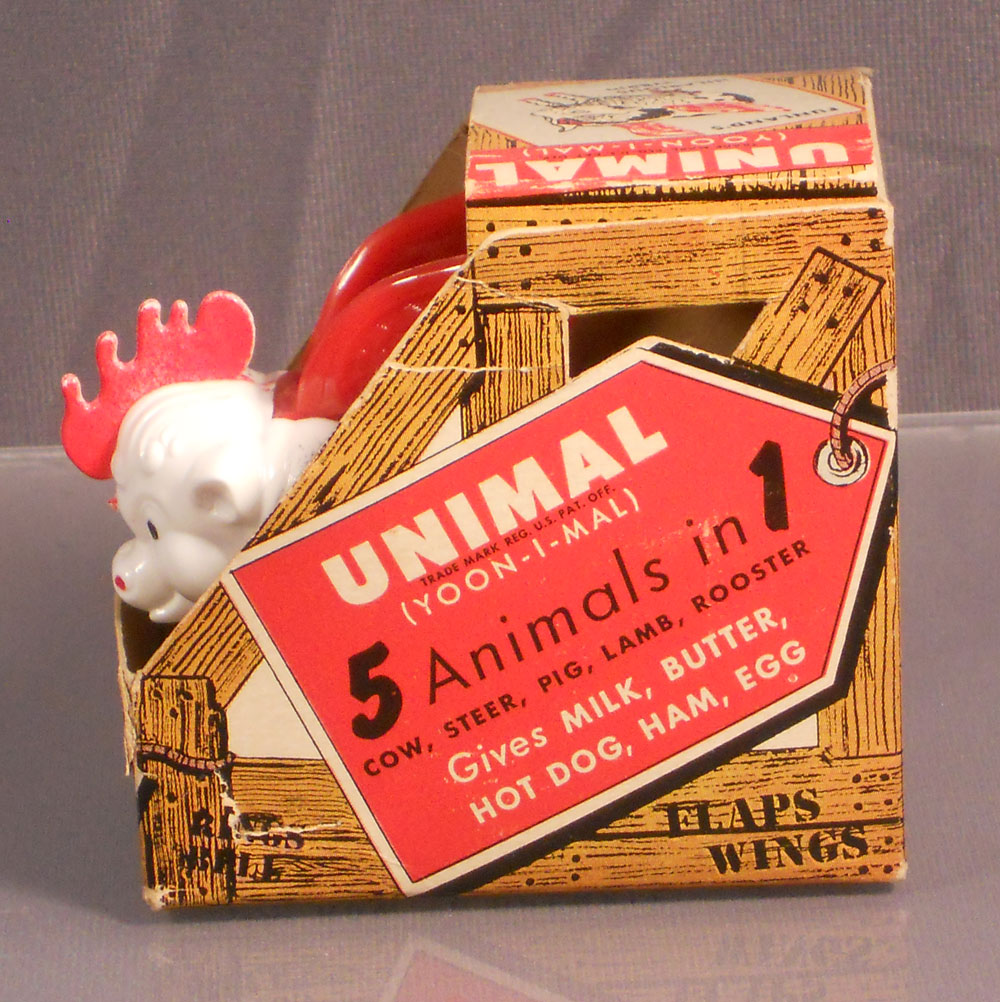 There isn’t much educational value in just simply creating a weird hybrid farm animal, unless you are trying to teach children why you shouldn’t “play God”.  No, the Unimal is meant to show us the different food products that livestock are responsible for.  This is where the Unimal’s action feature comes in to play. 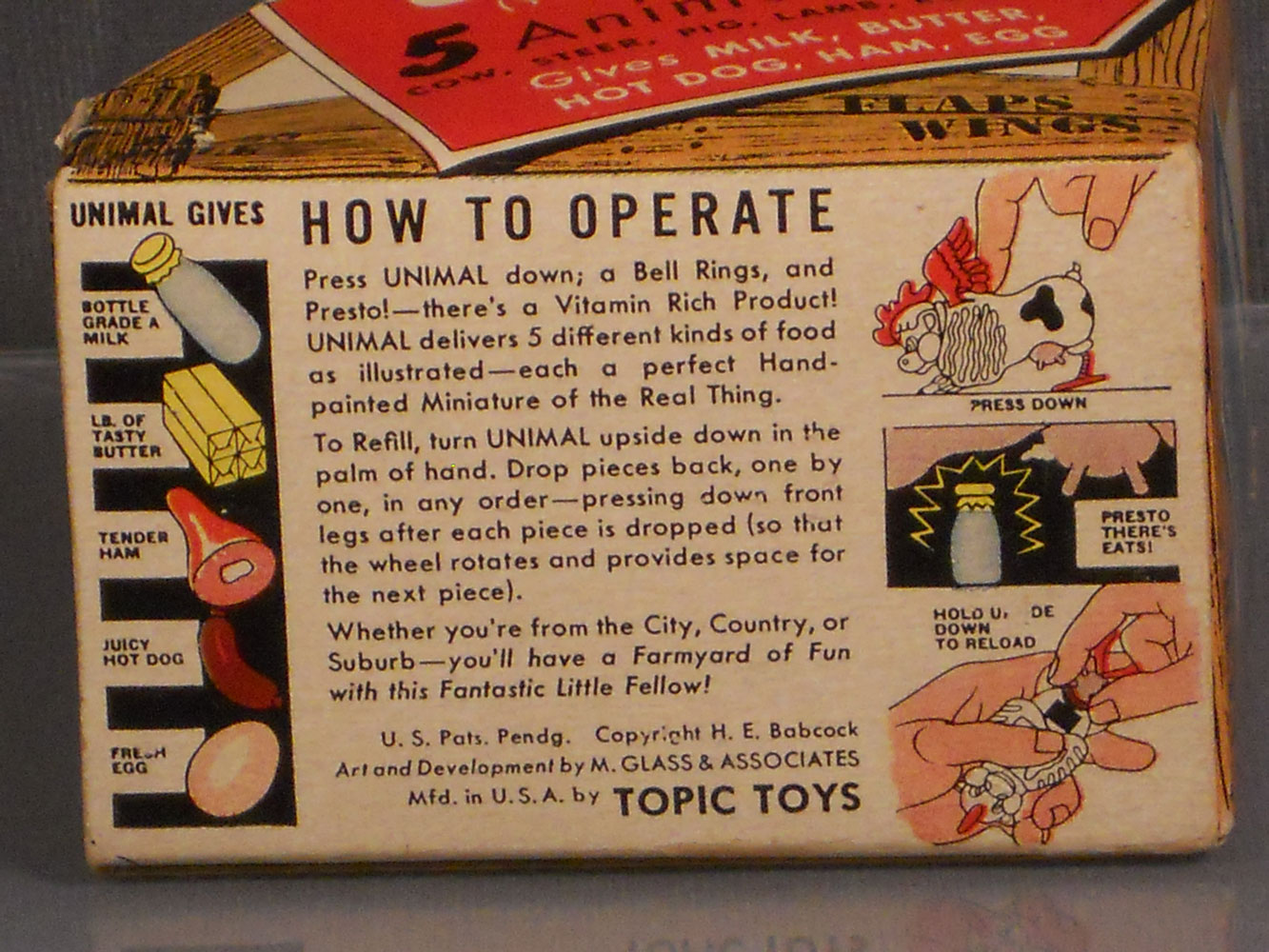 The Unimal works a lot like those plastic chickens that would “lay eggs” that they were making in the same time period as the Unimal.  You know, you would push the chicken down and the wings would flap and a marble would come out as an “egg”.  They use that same technology in those novelty “Pooping Animal” candy containers that they still make today.  Thankfully, due to its skinny chicken legs and cow utter, the Unimal doesn’t excrete things from its hind quarters; the food comes out of its chest cavity, which is only slightly less disgusting.  When you push his front legs down a bell rings, his wings flap, and he lays one of five food products. 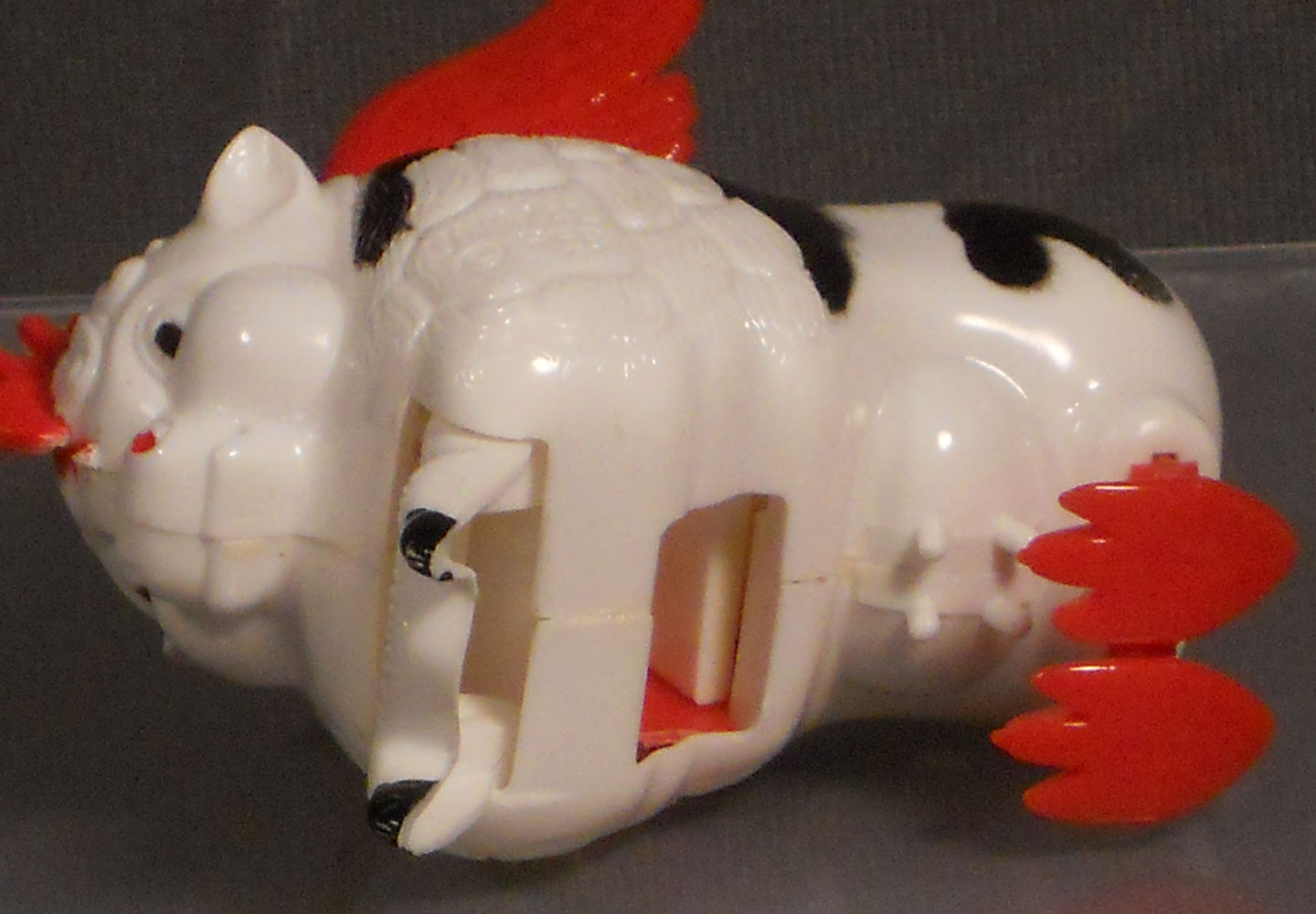 That’s right, the Unimal just “laid” all sorts of stuff.  Not only does it give eggs, but also milk, butter, ham, and hot dogs.  Nothing says health food like butter and hotdogs, right?  Unimal truly is a miracle animal.

This may be one of the greatest educational toys ever; because I highly doubt most of the children playing with it had any idea that they were being educated.  The Unimal gets its point across, though, doesn’t it?  From these five animals come these five products.  It couldn’t be a simpler message from a weirder toy.  Of course, I have to be honest and say that I totally didn’t buy this for its educational value.  Instead my brain was perplexed by this crime against nature and its function of laying ham and hot dogs. I found it funny and bizarre.  Unlike most people, funny and bizarre are two of my criteria for buying things, so Unimal came home.  I can’t say that I have seen too many of these on the market, in fact the only one I can think of is the one I bought.  It makes me wonder how these toys were marketed, and if they ever saw shelf time in a regular store, or if they were just sold at farm and home shows where their plaster counterpart was displayed.  For the amazing amount of information that exists on the internet about the Unimal, that information I couldn’t find. 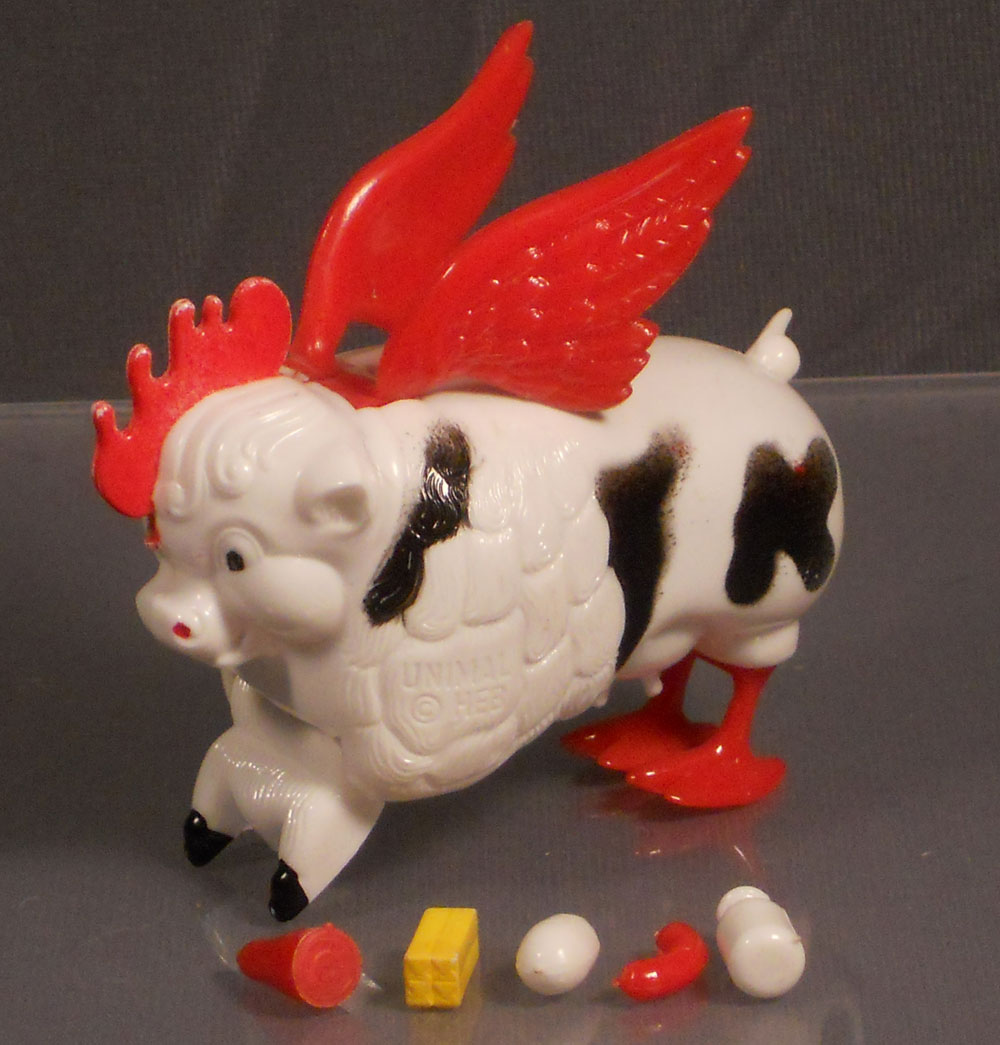 Where ever my Unimal came from, I am happy to have him gracing my shelf.  It isn’t every day you find a toy that lays hotdogs and butter.  In fact I am pretty sure the Unimal is it.  This hermaphroditic Frankenstein of a farm animal is probably the coolest educational toy I have ever seen.

This entry was posted in 1950's, Amy, Monsters, Uncategorized, Weird. Bookmark the permalink.