I have to admit – I love old signs.  Their sole purpose was to say “Hey, look at me and buy what I have to sell!”   Before we had radio or television, the role of the sign, at least small ones, was even more important than today.  There weren’t too many other ways to get the attention of potential customers; consequently, signs could be found everywhere – on the sides of barns, nailed to a tree and all over your local general store, hardware store, or apothecary shop.  Over a hundred years ago, signs often had beautiful artwork or made claims that were just plain outrageous.  After all, things weren’t regulated too heavily in those days.

That brings us to my favorite sign.  It isn’t very big and it hasn’t traveled very far in the last one hundred and forty years or so, but you have to love a sign extolling the virtues of manure. 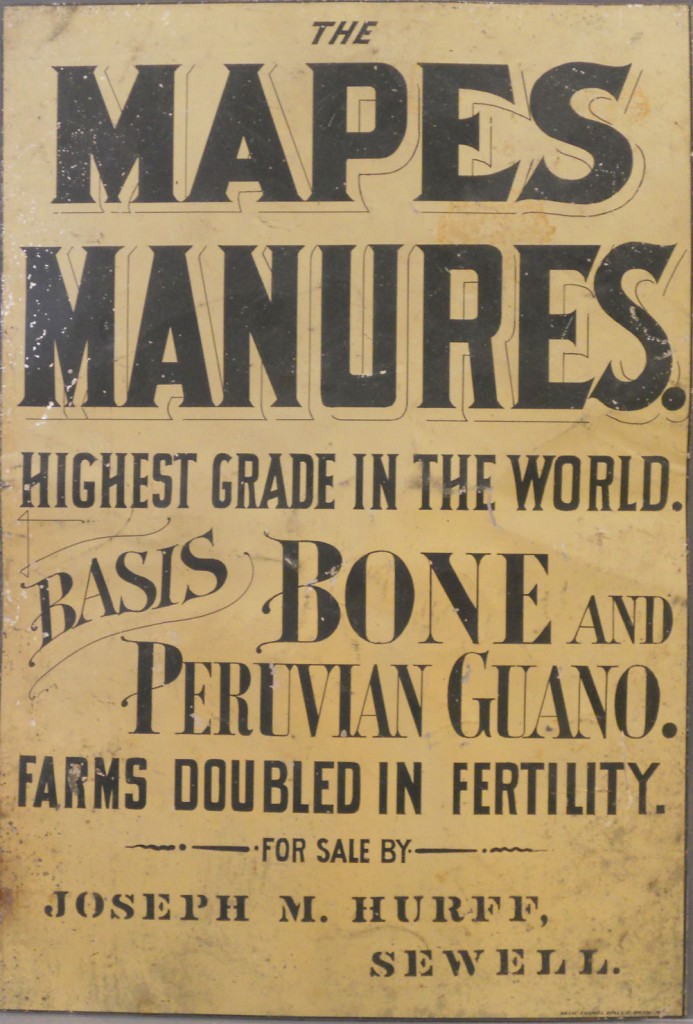 Yes, that’s right M-A-N-U-R-E!  To be specific – The Mapes Manures – Highest Grade in The World!  If you don’t believe it, just read the sign.  After all, it is made from bone and genuine Peruvian Guano, which is mega-mounds of bird poop.  Today we would call that environmentally friendly.

To be fair, guano isn’t exactly the stuff you wash off the hood of your car.  It is the excrement and urine of sea birds.  It can also be found in bat caves, too, (Holy crap Batman!) but the bird stuff is better.  In the relatively dry climate along the Peruvian coast and on the nearby Pacific Islands, literally mountains of guano would form over time.  In the middle of the 19th century, it was one of the best sources of fertilizer as it was full of the nutrients needed to grow things.  It was also odorless.  The elegant clipper ships, which were being replaced by steam vessels by then, often ended their days hauling guano.  Its use as a fertilizer faded by the early 20th century.

Indeed, James Jay Mapes (1806-1866), who had a farm near Irvington, New Jersey, was a pioneer in developing fertilizers and their use.  The claims of “farms doubled in fertility” wasn’t exactly without merit.  He patented his fertilizer in 1859.

Carol and I found this sign in a little antique shop about fifteen years ago.  The shop was located about twelve miles from our home.  We were told it was found in the closet of a house owned by a one hundred-year old woman who had recently passed away.   She actually lived in a town about five miles from us.  That would put it about three miles from where Joseph Hurff, the purveyor of the bone and bird poop mix, once lived, and about two miles from where we now live.  An 1870 map of our local township shows the location of his farm in Sewell, New Jersey. It turns out he was actually at the forefront of an agricultural revolution.

One clue to the age of a sign is the use of periods.  In the 19th century, they put a period after just about every grouping of words, even if they didn’t make a complete sentence.  That practice also faded in the early 20th century (along with the use of guano).  Determining the actual age of the sign is tricky.  It could be as early as the 1860’s or as new as the 1880’s, but I personally think it is closer to the earlier date.

Anyway, when you think you have a bad job, just think of the poor guy in the 19th century working at the fertilizer factory grinding bone and mixing it with piles of bird poop!  I wonder what the human resource department told him!