I miss having action stars. I really do. Sure, instead of barely coherent, steroid-laden actors like Arnold Schwarzenegger and Sylvester Stallone killing the living snot out of villains who clearly don’t stand a freaking chance against them, we’ve gotten more complex thrill rides where our heroes are psychologically tortured or up against insurmountable odds or fighting the demons inside themselves more than a living, breathing antagonist. But sometimes, you just want to see the good guys kick ass, and we’ve simply moved away from that time and place.

Stallone is the action star I want to bring up today. While Stallone is past his prime, he’s trying really hard to keep the gritty action movies of the 1980s alive. However, when he was in his prime, he was responsible for two major roles: Rocky Balboa and John Rambo. Stallone might have been built like a rock in the 1980s, and I’m sure he could EASILY take me or an army of me in a fight even today, yet somehow, he had that “average Joe” quality that made it seem like the odds were constantly stacked against him. With Rocky, he went from local meathead boxer in the first one to a superhero who single-handedly ends Communism in the fourth one, and people still LOVE those movies, despite the fact that the people in charge of those movies were clearly losing their minds near the end. Rambo, however, was Stallone’s excuse to get violent and gory, and the film single-handedly inspired literally dozens of Vietnam-veteran-on-the-hunt movies in the 1980s. Viewers lapped it up, as these tended to be about as action-packed as movies could get at the time.

Despite its hard-R rating, Rambo inspired a series of action figures in the 1980s. Now, it should be noted that while SOME of the characters from the movies were the same, most of them were created specifically for Rambo: The Force of Freedom, an animated series LOOSELY based on the movies. After all, the main protagonist was a violent Vietnam War veteran whose post-traumatic stress disorder was a major plot device in the movie series. The writers thought of a great way to alleviate this: make absolutely NO references whatsoever to the plots of the movies, Vietnam, or anything that had any of the Rambo movies worth watching. In other words, you had a shirtless musclebound man running around leading a team of stereotypes against a nefarious group called S.A.V.A.G.E. (Specialist-Administrators of Vengeance, Anarchy and Global Extortion). In other words, it was G.I.Joe…but…it was Rambo, I guess.

Anyway, since Rambo had name brand recognition, Coleco scooped up the rights to make action figures. After Coleco found oodles of success with Cabbage Patch Kids, they sunk that money into creating action figure lines, which were also generating obscene amounts of money in the early 1980s. Coleco’s action figures were a little bit larger than most of the other toys on the market at the time. I don’t know if that ended up helping or hurting them, but at least it meant they stood out. The company created Sectaurs in-house as a fantasy line to compete with He-Man and the Masters of the Universe. Rambo was probably a license meant to compete with kids who enjoyed more military-themed toys like G.I.Joe: A Real American Hero, even though the two lines were not in scale with one another.

As such, the Rambo toy line was loaded with crazy colorful characters, vehicles, and a gigantic playset. The heroes were made up of a multi-racial supergroup who all served specific roles (mechanics, espionage, martial arts, etc.) and a rag tag bunch of complicated villains (a mercenary, the leader of a biker gang, a rival martial artist wearing the opposite color of the good guy martial artist, etc.) The show ran for 65 episodes, but the toys did not sell particularly well, mainly because the characters had a far more generic look than most of the other toys available at the time.

However, there is one notable exception, and after that lengthy introduction, I’m finally ready to talk about him. Meet the evil mad scientist of S.A.V.A.G.E., DR. HYDE! 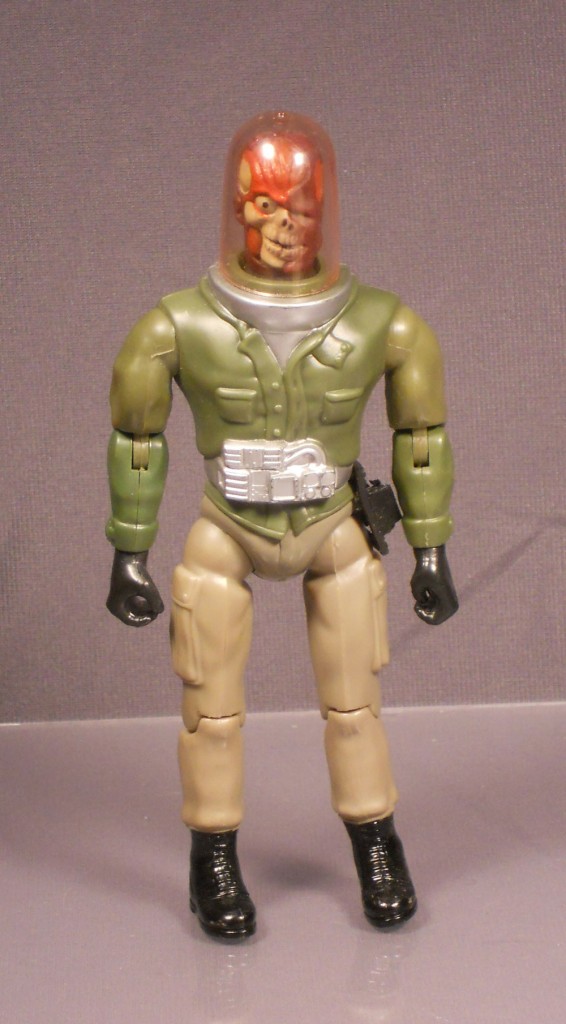 If there’s one advantage of the cartoon over the movies, is that you can create crazy characters like Dr. Hyde. There is no way this would have worked in a film about the Vietnam War…or any live action movie that attempted to be grounded in some sort of reality. Apparently, this guy has an IQ of 180 and was a dishonorably discharged military surgeon who began attaching cybernetic parts to wounded soldiers. He also surgically altered his own face, although judging by the looks of things, my guess is that he wasn’t too good at it. 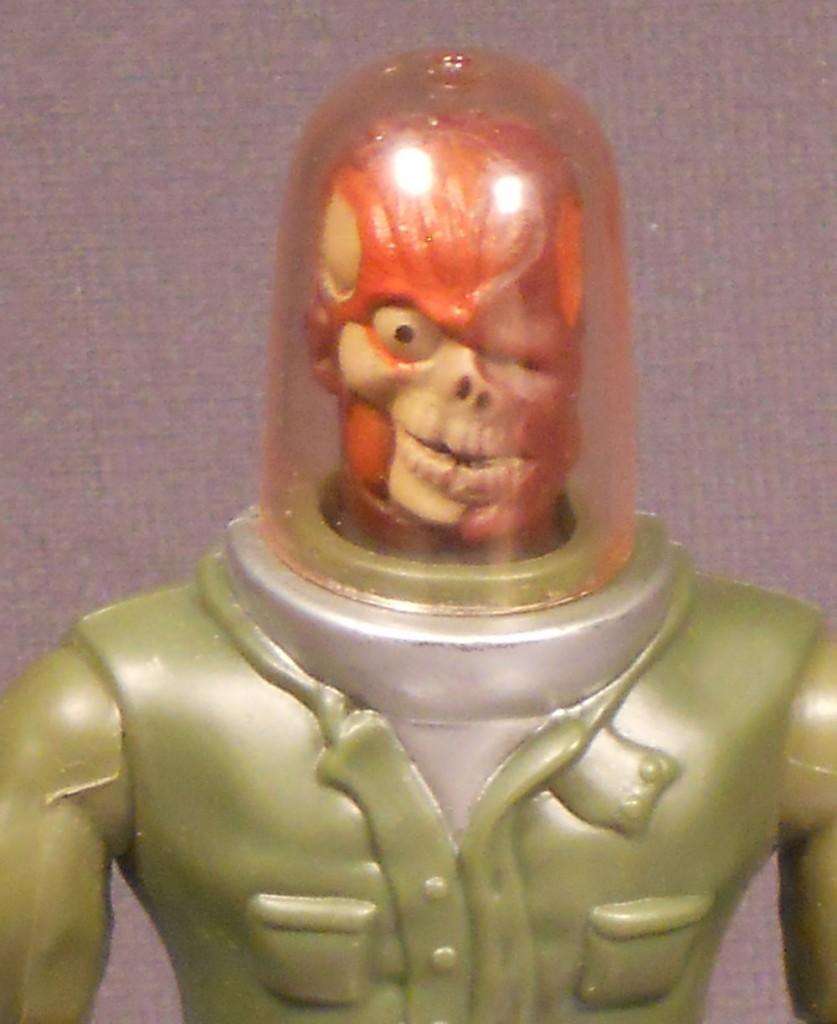 A lot of collectors want this figure because he is so unlike anything else in the Rambo line. I had a large collection of generic monster action figures I hoarded as a kid, and if I had owned this figure, he would have fit right in. However, what you are looking at is NOT the super-rare figure that eventually saw release in the United States. You are looking at his super-rare South American counterpart.

The key difference is the dome helmet. The American version is really cool because the dome is completely darkened, and you can only see his face when you activate his light-up mechanism. For a 1980s toy, the end result is surprisingly more effective than most toys with light-up actions of the era (I’m looking at you, Blackstar). When South America got a hold of the molds to make their own figures, they decided it would be too expensive to recreate this light-up feature. Instead, the dome is clear, so you can constantly see Dr. Hyde’s ugly mug. This is one advantage that the South American version has, since many examples of the American Dr. Hyde have stopped working, and if you own one of those, you will never see what Dr. Hyde really looks like.

I picked this up at a toy show about two and a half years ago. The figure is missing all of his accessories (basically, a backpack and some weapons), but it came with a vehicle called the S.A.V.A.G.E. Stormbomber. 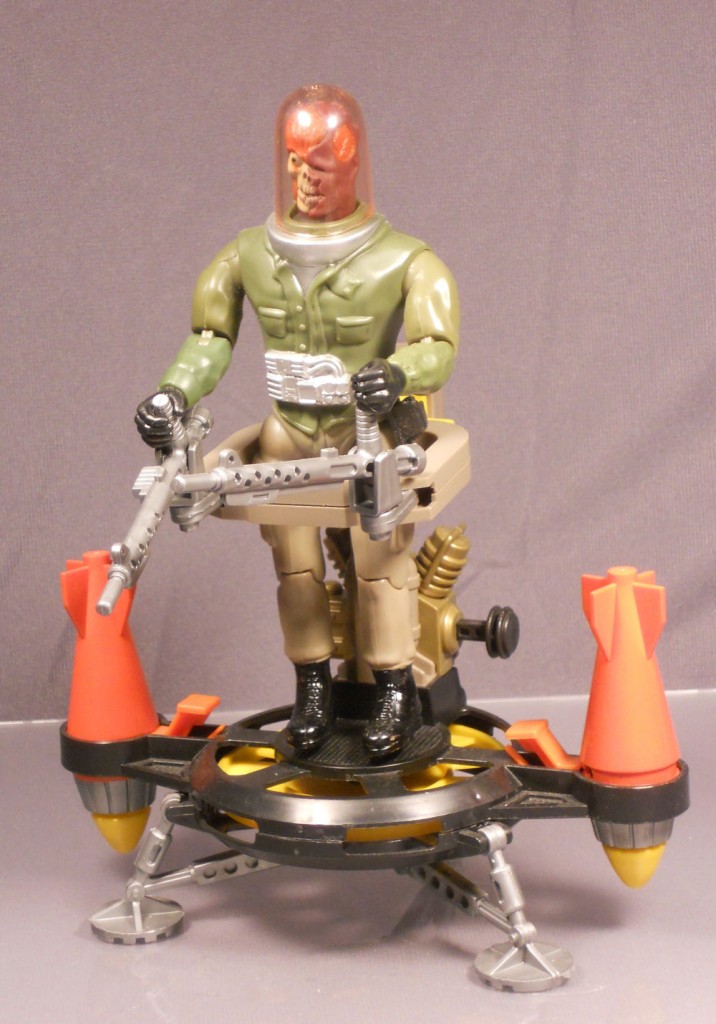 This was planned as a second series vehicle, but never saw release in the United States. Like this version of Dr. Hyde, it was released only in South America. In the absence of having all his accessories, I think this vehicle makes Dr. Hyde look a bit more threatening, especially with a few comically large bombs placed on either side of him with no shields or armor whatsoever to protect him. He’s flying into battle and he’ll either kill you or blow himself to Kingdom Come trying!

I paid $75 for the pair, which I thought was more than fair at the time. I wanted to at least have an example of Dr. Hyde in my collection, and good, clean, loose examples of the American version easily sell for upwards of $100, way more than the majority of the other figures in the Rambo line. Plus, it’s not like I constantly run into toys from South America at flea markets or yard sales. The cost of shipping from South America alone makes these toys definitely worthwhile.

I’m sure I will eventually replace this figure with an American one someday, and my hope is that I just stumble upon it in some random lot or box when I’m least expecting it and I’ll pay next to nothing for it. But for now, I think this looks great on a shelf, and it’s certainly not something you’re bound to see in a lot of other collections!