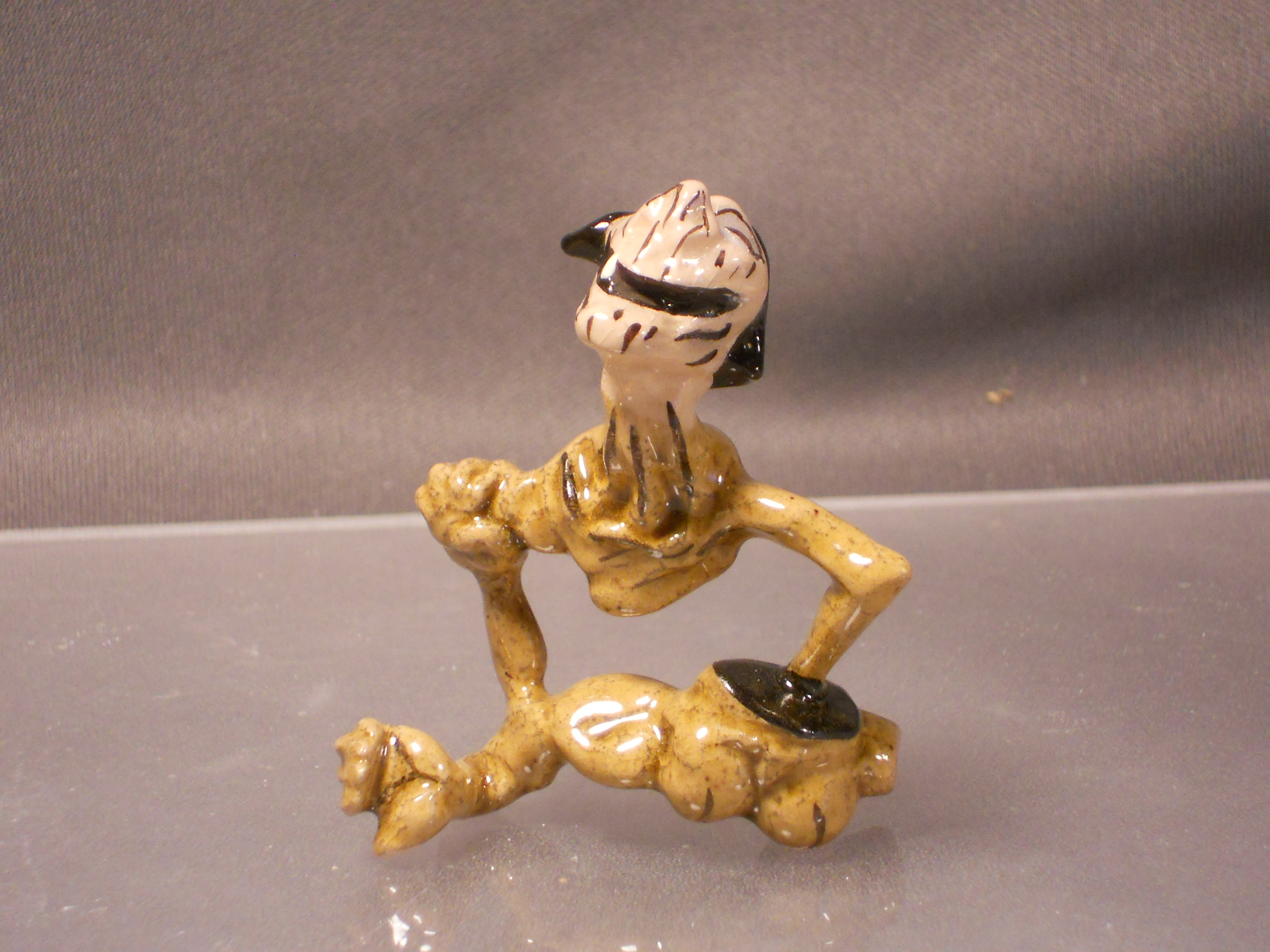 The Weakling from The Little Horribles

For my first blog on Collectorgene.com, I wanted to share an observation that I made several years ago when I discovered the amazing pottery of Hagen Renaker.  I guess this story starts on a family trip to Vermont, where I found a small figurine of Lady from Disney’s “Lady and the Tramp” in an antique shop. 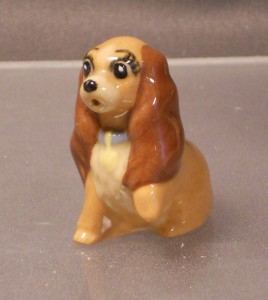 Disney’s Lady from “Lady and the Tramp” by Hagen Renaker

I was fascinated by this miniature figure.  It only stands a little over an inch, and the amazing quality in which it was crafted had me immediately researching its origin.  It didn’t take me long to find out that it was made by Hagen Renaker.  Hagen Renaker is best known for making animal miniatures.  These figurines were popular staples in gift shops, but as Japanese potteries started to create cheaper figurines in the 1950’s, Hagen Renaker decided to branch out.  One way they branched out was to get the Disney license and create Disney miniatures.  They also branched out into the Little Horribles, among other fascinating pottery lines. 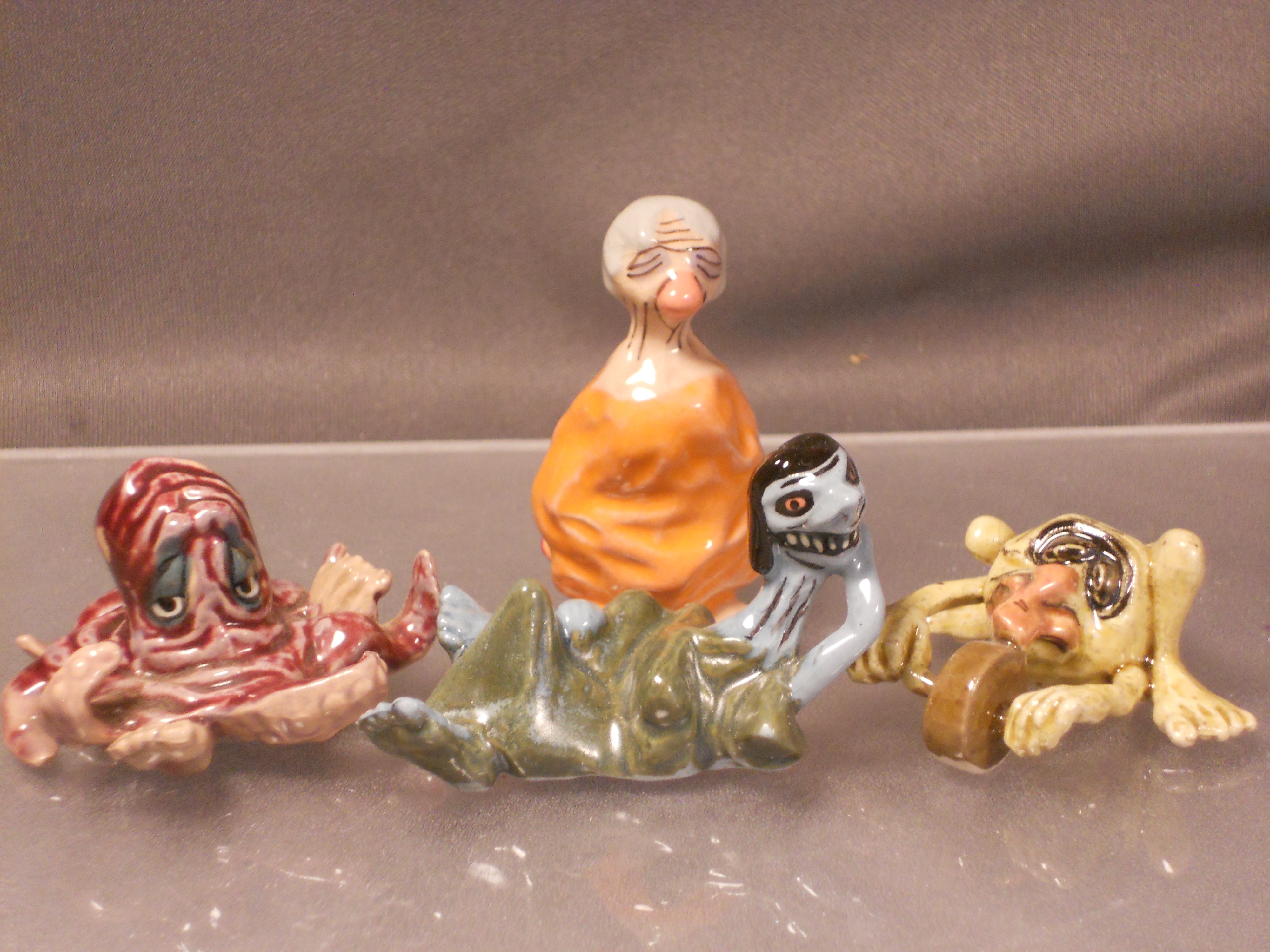 These are some examples of Little Horribles from my collection.

The Little Horribles are an amazing line of grotesque figures made in 1958 and 1959.  Designed by Nell Bortells,  they are humorous and colorful and extremely rare.  The second I saw them I fell in love, and I have since accumulated a nice little collection.  Today I want to focus on one figure in particular, though, a figure that was immediately familiar to me because I had seen it once before in a painting.  That figure is known as The Weakling, and the painting is Salvador Dali’s Soft Construction with Boiled Beans (Premonition of Civil War). 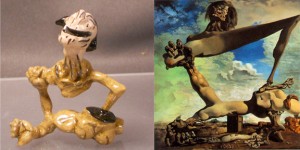 Salvador Dali’s painting, Soft Construction with Boiled Beans (Premonition of Civil War), is a painting that was first made familiar to me in art history class, but I have since visited it on multiple occasions at the Philadelphia Museum of Art.  Soft Construction with Boiled Beans (Premonition of Civil War) was painted in 1936.  Though painted before the start of the Spanish Civil War, Dali claimed that he was a prophet and dreamed about the Spanish Civil War before it began.   Most likely he renamed the piece after the war started, but it is understandable how the somewhat disturbing imagery in the painting could make one think about the effects of war;  it is an image that etches itself into your brain, and when you see it, you never forget it.  Needless to say, when I first saw a picture of Hagen Renaker’s “The Weakling”, I felt like I was seeing a familiar face.  Looking at the two pieces next to each other, there are clear differences, but the similarities are undeniable.

In Dali’s painting the right hand is clenching a breast, where similarly The weakling is grasping more of a shoulder. 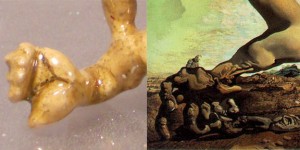 Dali gave his figure two right hands, where The Weakling has a right and left.  Both the painting and figurine have similar hand placement though. 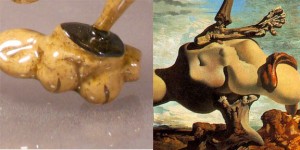 The weakling is lacking feet all together, where Dali’s painting has both present.  However, they both share the same composition of the left leg supporting itself on a lower torso… or butt. 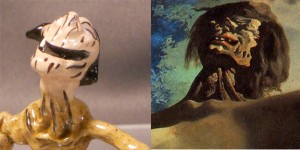 Though the faces look very different they still share some compositional elements.  Both have pronounced up-turned noses, long dark hair, and a similar grin.

There are too many similarities to ignore between these two figures.

It is hard for me to believe that two people unaware of each other could both come up with this same bizarre and grotesque figure 22 years apart.  I am sure that Nell Bortells was familiar with Dali’s painting.  Obviously, when Bortells designed her figure, she made it a little more PG, and, dare I say, a little bit cuter.  She also made several changes to the design, which may have been done to avoid copyright infringement.  Why she chose to create a figure based on a Salvador Dali painting, I cannot say, but I doubt it was done maliciously or deceitfully.

Nell Bortells was clearly a gifted designer.  There is no denying it when you look at some of her other creations, and I think that she probably found a lot of influence in Modern art for her Little Horribles, Surrealism and Cubism especially.  I cannot know for sure why she would create a figure directly based on a Salvador Dali painting, but I think it was most likely an homage to Dali.   Bortells may have been a fan of Dali and thought his style would fit in beautifully with her Little Horribles.  I can’t be completely sure; I can only speculate.

No matter why “The Weakling” exists, as a fan of both The Little Horribles and Salvador Dali, I must say I am thrilled that it does.  It is a bit of an anomaly in the collectible figurine market.  Vintage figural representations of famous paintings don’t often exist in mass market forms like this.  It is kind of a special, albeit grotesque and totally weird, figure that I believe deserves some attention for what it represents.  If you are lucky enough to own a Little Horribles “The Weakling” like I am, I hope you will now look at it on your shelf or wherever you display it and see the two brilliant artists who created it for you, Nell Bortells and Salvador Dali.