If you ask a toy collector how they got started, the response is often “I started buying back my childhood.”   It seems the lure of toys for adults is almost as great as it is for children.  Maybe it’s that little kid inside all of us trying to get out!

Whatever the reason, toys have been and remain among the most popular areas of collecting.

My interest in collecting toys did not take the normal path.  For some reason I considered the toys of my own childhood as not old enough to collect.  I was too busy buying the toys of older generations or as I once heard it harshly referred to as “dead people’s stuff”.  While I still like the older toys,  several years ago I came to the unbelievable realization that my own childhood was half a century ago.   I was finally ready to search for my little kid self.

This change of heart started during the Christmas season several years ago.  We like Christmas so much in our house that we put up two trees.  The one in the living room is the “Victorian” tree and is strictly for antique decorations.  The one in the family room is less formal and is decorated with ornaments we’ve picked up as souvenirs on vacations, those given to us by friends and family and the ornaments made by the kids when they were in elementary school.  We also started putting toys of the fifties and sixties under this tree as well.  We had some of Carol’s childhood toys, which were all in excellent condition (she was a girl after all), and I even had a few things from my youth as well, but suddenly a yearning came over me to locate one of the best toys of my childhood – my Miller- Ironson lumber truck!  As far as I knew it still existed and was somewhere in my mother’s house but I wasn’t exactly sure where or what kind of condition it was in.

I received this truck the Christmas of 1956, when my family lived in the house my father grew up in.  It was in a working class neighborhood in Gloucester City, New Jersey, which as a six year old, seemed as good a place to grow up in as anywhere else.  The neighborhood was filled with little boomers like myself and my older brother John, and there was a store selling penny candy around the corner.  What more could a kid want in those days? 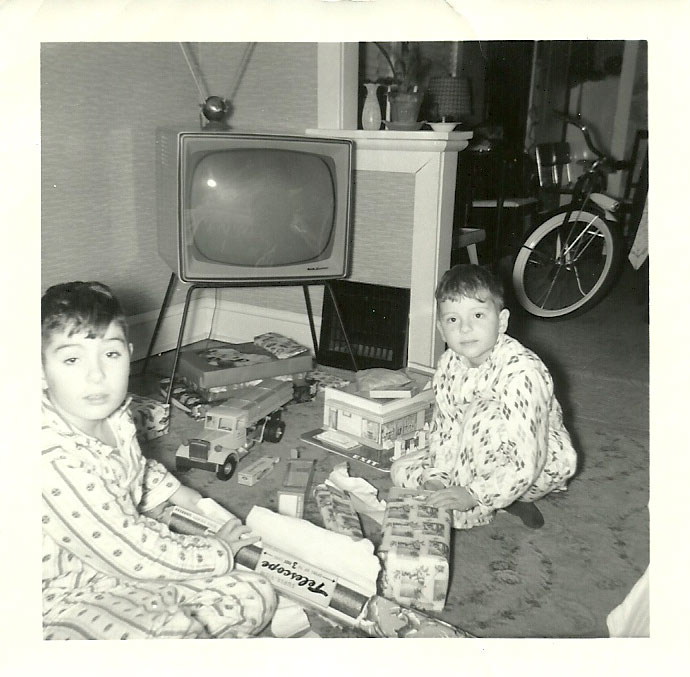 Christmas morning 1956.  The bleary-eyed kid to the left is my older brother John and the little waif to the right is me.  The truck can be seen in the center of the photo under our 21 inch black and white TV.

Even though my depression era parents kept reminding us how much better off we were than they were when they were young, growing up in the 1950’s would seem primitive by today’s standards. The only days of the year that you stood a chance of receiving really good (as in not cheap) toys was your birthday and the day Santa came down the chimney.

To come up with my want list that year I looked through a toy catalog (possible Sears), saw a toy lumber truck which appealed to me – perhaps it was the logs – and put it on my growing list.  I’m sure the one I saw in the catalog was a rather modest one, possibly a Hubley which wouldn’t have set my father (err Santa) back too much.  What I got that Christmas morning  was the Cadillac of toy trucks – a Miller- Ironson! 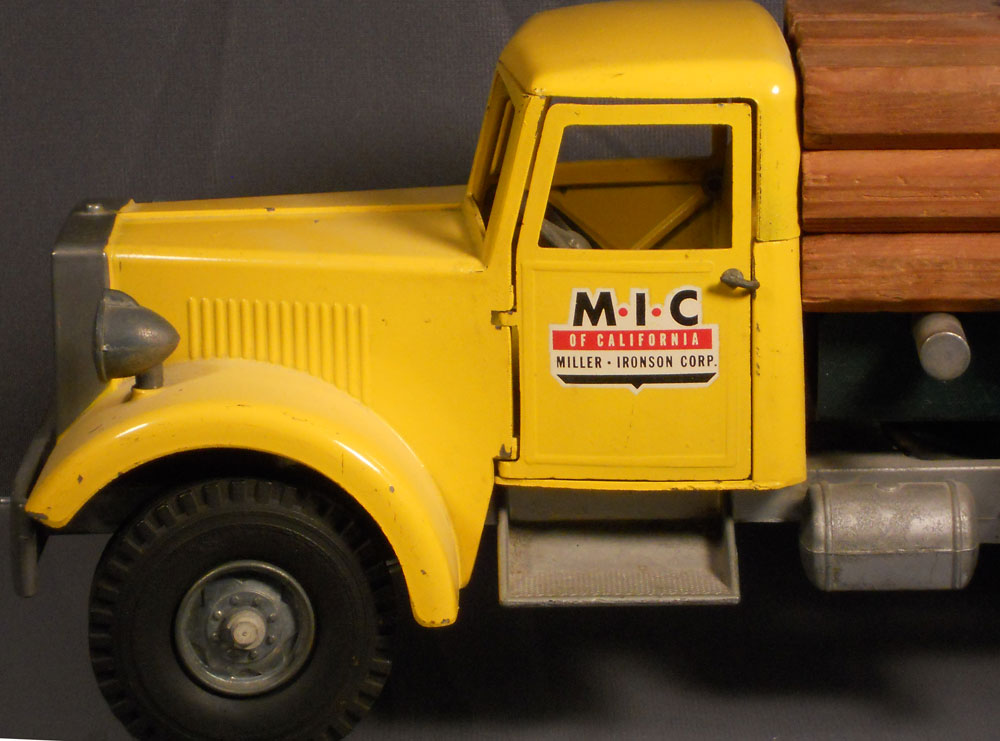 Miller – Ironson was the successor of Smith- Miller of Los Angeles California.  The company wasn’t around for too long and sadly, was probably out of business by the time I received my big present.  While it was around, however, it produced the some of the best toy trucks of the post-war era.   Did my father get in on sale?  I’ll never know.  These trucks were expensive in their day and mine probably retailed for at least $10.00 in 1956 money, which would be well over $100 today.  The best part to me was that the doors opened and the steering wheel worked.  The lumber could be removed by disconnecting two chains and dumping it by the use of a side lever.   In an era before video games, this was great stuff!

Fifty years later, I thought my truck had survived three moves and years of neglect, but I hadn’t really seen it in decades.  This truck had suddenly become a portal to another time for me and I wanted it back in the worst way.  It was the way back to my childhood!

Fortunately this quest only required a five mile drive to my mother’s house and a look in the attic to find my childhood treasure.  Suddenly there it was, a little dusty, but in amazingly good condition.  The yellow cab showed only minor wear in the paint, the lumber had darkened with age, and the chains were a little rusty, but all in all it was in great condition.  I felt like I connected with an old friend again, but this time we were going to stay in touch!  It was also a way of sharing my childhood with my family.

Objects like my truck aren’t only important for what they are but what they represent.  For me this was a tangible connection to a time and place that I hadn’t been to in a long time.  It was proof I was once a kid!  It is now proudly on display in our computer room.

I’d like to thank that little kid that I once was for taking good care of his/my truck.  If, somehow, I could get into some sort of magical time machine and go back and meet him, I would ease his mind and let him know that he doesn’t have to worry about those pesky Russians.  Those air raid drills at school are a waste of time.  He’ll never have to find out if hiding under a school desk will actually protect him from a hydrogen bomb.   Yes, his father will eventually buy a color TV and, best of all, he will get to go to Disneyland – someday, but he’s going to have to wait a long time for both of those.

I’ll let him find out the rest on his own. 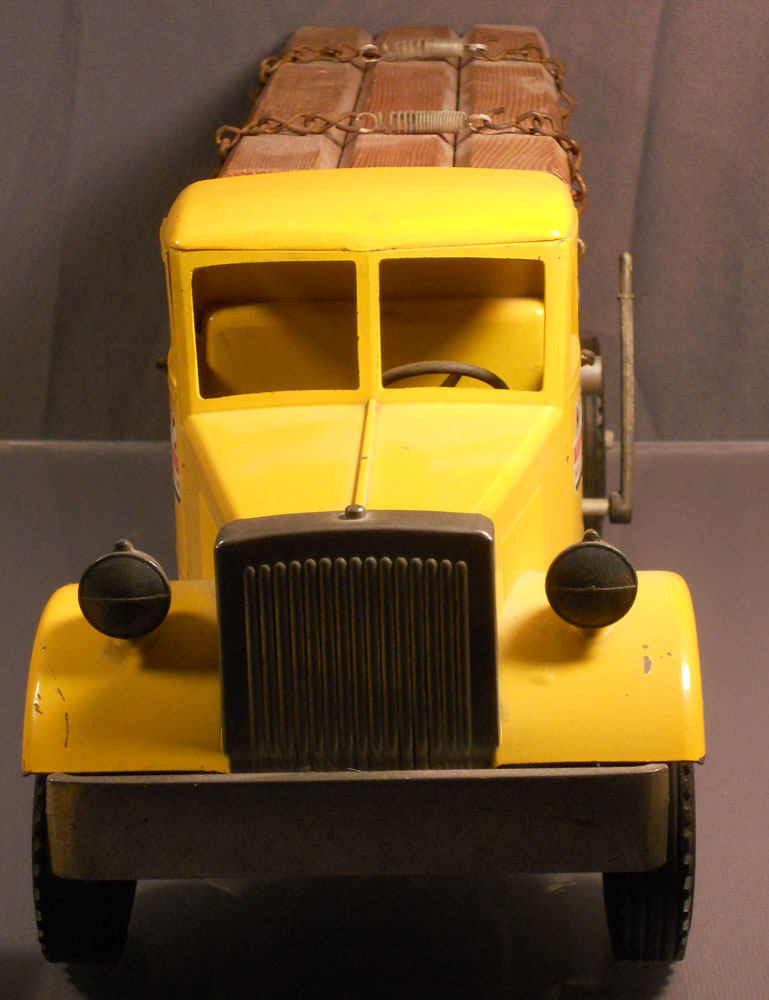 This entry was posted in 1950's, Jim, Toys, Vehicular. Bookmark the permalink.

One Response to My Miller -Ironson Lumber Truck – One Owner, Low Miles and Still Truckin’